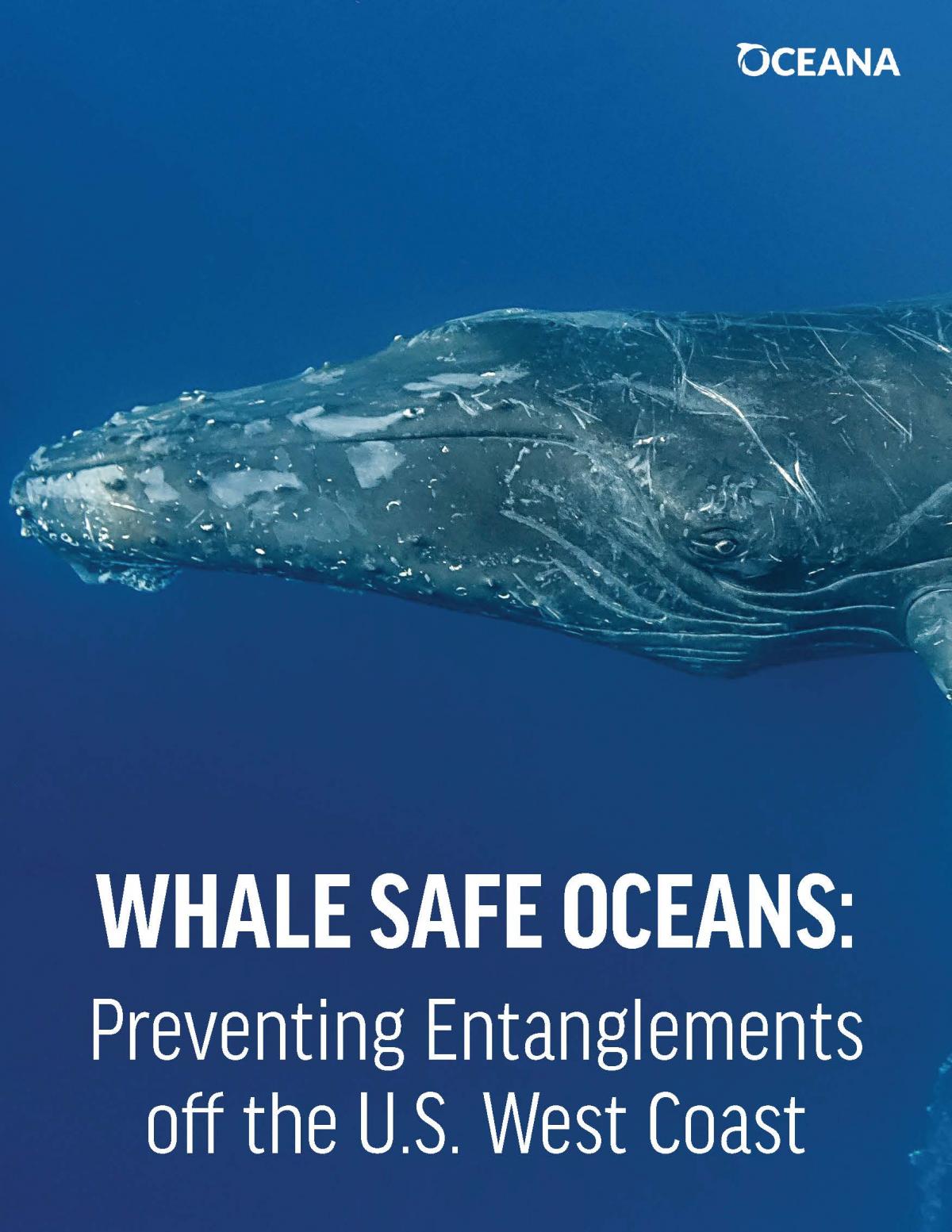 View our new report on whale entanglements by

clicking the cover image or the link below:

Whales and sea turtles face a gauntlet of fishing nets, lines and buoys as they swim and feed off the U.S. West Coast. Fisheries that deploy traps or pots use a vertical line that connects a metal trap resting on the seafloor to a buoy floating at the surface. Whales and sea turtles swimming by or feeding in the area can get tangled in this line. The line can wrap around a whale’s mouth, fluke or pectoral fins, or around the flippers and neck of a sea turtle. Once entangled in the fishing line, whales may suffer for months, dragging heavy fishing gear behind them that hinders their ability to feed. Many entangled whales eventually die from infection, severed appendages, starvation, drowning or a combination of these impacts. Sea turtles suffer similar fates as they get entangled and may become anchored to fishing gear and drown. While some animals are lucky enough to free themselves, or are freed by trained disentanglement response teams, approximately 75 percent of whale entanglements are fatal.

In the previous decade (2000-2009) an average of eight whales became entangled per year. In more recent years, these numbers have dramatically increased, to a high of 56 confirmed entanglements in 2016. Climate change is contributing to the increase in entanglements as warmer ocean waters have shifted whale and sea turtle feeding grounds, often into new areas that overlap with crab fishing. When whales and sea turtles are present in larger numbers, fishery managers can temporarily close areas to conventional crab fishing for a specific length of time to decrease the risk of entanglement. These areas can then be re-opened to fishing once whales and sea turtles leave the area. These time and area closures can be informed by a number of approaches.

Regular surveys of fishing areas using boats or airplanes can assess the overlap of fishing gear and wildlife. Dungeness crab gear visible from the air can be plotted using GPS to highlight places and depths where pots were most abundant.
In 2016, Oceana partnered with NOAA scientists and LightHawk — a nonprofit organization that coordinates flights to collect data in support of conservation efforts — to conduct the first aerial survey to quantify number and locations of crab pots. The California Department of Fish and Wildlife now conducts its own aerial surveys.

In addition, data from whale watching operations that maintain daily whale sightings can be used as an indicator for when whales arrive and depart, and systematic surveys by boats can be used to quantify the locations of both traps and wildlife. Movements of whales and sea turtles can also be tracked using tags attached to individual animals. New technologies enable real-time, automated data using electronic monitoring. For example, Global Fishing Watch is an online platform that could be used to automatically identify the location of fishing traps by tracking the movements of fishing vessels. The combination of whale and sea turtle sightings, oceanographic and forage fish data, and fishing effort can then be overlaid to determine specific times and areas of elevated entanglement risk.

Pop-up fishing gear stays connected to traps on the ocean floor until a release mechanism is triggered that allows a flotation device to surface so fishermen can retrieve the catch. Release mechanisms can be set to release at a certain time (“timed release”) or upon receiving an acoustic signal from a fishing vessel (“on-demand release”). Because there is no surface buoy, virtual gear marking can notify fishery managers and other fishermen of the location of traps.

In the near-term, pop-up gears that meet these criteria should be allowed throughout the Dungeness crab season, including in areas that are off limits to conventional crab gear due to the presence of whales and sea turtles. This will provide incentives for fishermen to use the gear and a way to fish while avoiding entanglements.

Other proposed solutions would sever fishing lines in the event of entanglements, potentially allowing a whale to free itself. These include weak links, Yale grip sleeves and line cutters that in theory would only break the line after an entanglement. Despite these changes being easy to incorporate, none of these solutions prevent entanglements and there is no clear evidence that they allow an animal to free itself.