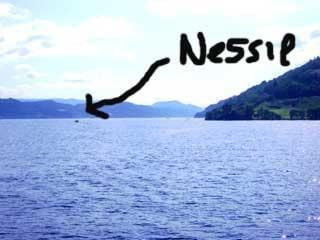 It took whale watchers off the southwestern coast of Iceland over an hour to decide the giant sea turtle they spotted was neither a whale nor a distant cousin of the Loch Ness monster.

Nevermind the fact that Nessy would have to leave the Loch and swim a good chunk of the Atlantic in order to greet the whale watchers, that’s beside the point.

The last time a sea turtle was spotted in colder Icelandic waters was 1963, though it’s still possible to see that turtle – biologists captured it, killed it and now display it at the Icelandic Institute of Natural History, where it supposedly can educate the public about key differences between sea turtles and our underwater ally.

And apparently there’s a lot of other stuff people don’t know about sea turtles, like how they’re endangered and we’re not allowed to kill them. In other news, a Cayman Islands man was arrested for turtle-napping a 350-pound green sea turtle, one of only 10 that still nest on beaches there.

Authorities found the reptile tied to a wheelbarrow in the man’s front yard, where it was allegedly about to be slaughtered.