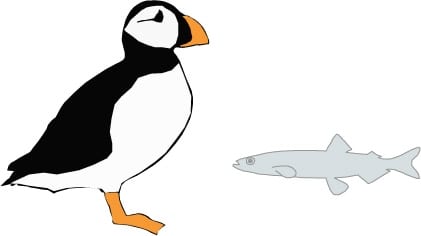 Puffins, charismatic seabirds populating the Atlantic Ocean, eat only a few species of fish, of which capelin is a critical component.

The Atlantic puffin, whose name aptly describes its distribution, is a diving seabird that feeds primarily on fish. Puffin diets change regionally, but in each place their diet is made up almost entirely of one or two species. In the northwest Atlantic, capelin is puffin’s preferred prey, sometimes accounting for up to 95 percent of its diet

Capelin are small silvery fish that have a key role in the food chain, as they feed on plankton and are themselves fed upon by a wide range of birds, mammals and fish. They are a schooling species that lives in cold open waters of the arctic and sub-arctic.

Commercial capelin fisheries in Canada, Norway, Iceland and Russia pose a threat for Atlantic puffins. Capelin are mainly used for fish meal and oil industry products and only to a lesser extent for food. Like so many other species, including Atlantic cod, Atlantic puffins are competing with the fishery for its main food source.