Today, Oceana released a new study that found shrimp, America’s favorite seafood, to be misrepresented in the United States. In the only known study of its kind in the U.S., DNA testing confirmed that 30 percent of 143 tested shrimp products—found in 111 restaurants and grocery stores—were misrepresented. Oceana also discovered that consumer information about the shrimp products—such as where and how it was caught or farmed—was often deficient, making it difficult for consumers to make informed choices about the shrimp they purchase.

“Despite its popularity, U.S. consumers are routinely given little to no information about the shrimp they purchase,” Oceana senior campaign director Beth Lowell said in a press release. “While shrimp is the most commonly consumed seafood in the U.S. and the most highly traded seafood in the world, its high demand has led to conservation concerns as well as a bait-and-switch on consumers. Without tracking where, and how our seafood is caught or farmed, and ensuring that this basic information follows the product through each step in the supply chain, shrimp will continue to be misrepresented.” 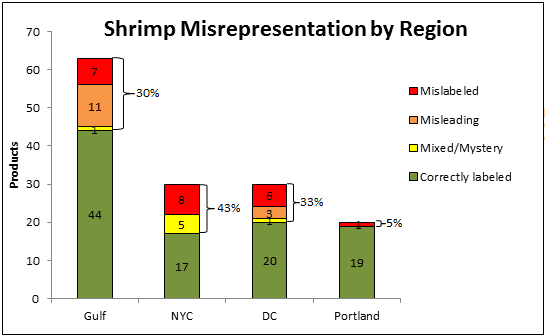 Oceana tested shrimp sold in four different areas, each with cases of misrepresentation. New York City had the highest amount of misrepresentation at 43 percent, followed by Washington, D.C. at 33 percent, 30 percent in the Gulf of Mexico region, and 5 percent in Portland, Oregon. Misrepresentation refers to products that are either mislabeled—like one species being referred to as another—or misleading, such as when farmed shrimp are labeled as being wild-caught, or multiple types of shrimp mixed together in one package.

“I’ve seen cute little cleaner shrimp in aquariums and while scuba diving, but never expected to find one on a grocery shelf,” report author and Oceana senior scientist Dr. Kimberly Warner said in the release. “We really know very little about the shrimp we eat, and the information we do get may not be trustworthy. Consumers have a right to know more about the shrimp they purchase in order to make more responsible choices.” 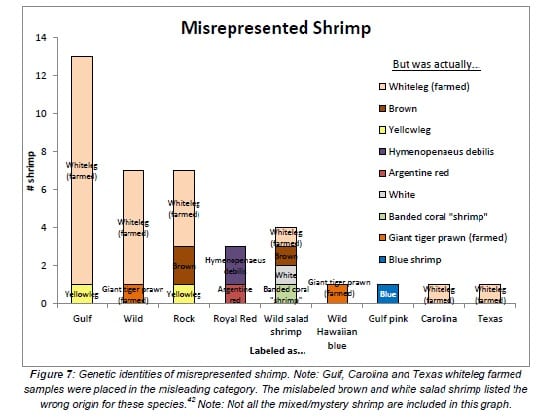 Other key findings from the report include:

• The most common species substitution was farmed whiteleg shrimp sold as “wild” shrimp and “Gulf” shrimp.

• Forty percent of the 20 shrimp species or categories collected and identified were not previously known to be sold in the U.S.

• A branded coral shrimp, which is an aquarium pet not intended to be consumed as food, was found commingled with another unidentified shrimp in a bag of frozen salad-sized shrimp purchased in the Gulf.

• Overall, 30 percent of over 400 shrimp products surveyed in grocery stores lacked information on country-of-origin, 29 percent lacked farmed/wild information, and one in five did not provide either.

• The majority of the 600 restaurant menus surveyed did not provide the diner with any information on the type of shrimp, whether it was farmed/wild, or its origin. 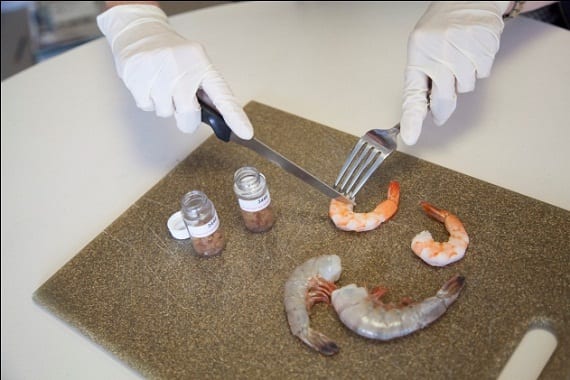 In June 2014, President Obama created a dedicated government task force to combat seafood fraud and help keep illegally caught fish out of the U.S. market. Oceana is encouraging the task force to take a comprehensive approach to addressing these issues, including requiring traceability for all seafood sold in the U.S. to ensure that it is safe, legally caught, and honestly labeled.

“Until traceability is the status quo, consumers should ask more questions about the seafood they purchase, including what kind it is, if it is wild or farm-raised, and where and how it was caught,” said Lowell. “And whenever possible, consumers should also support traceable seafood, which will tell the story of the product while helping to ensure that it is honestly labeled.”

President Obama’s recently designated Task Force on Combatting Illegal, Unreported, and Unregulated (IUU) Fishing and Seafood Fraud is developing solutions to tackle these problems now. Please join us in calling for seafood traceability to track shrimp from boat or farm to plate, allowing consumers to have more information about their shrimp. Click here to sign Oceana’s petition to call on President Obama’s IUU and seafood fraud task force to recommend traceability for all seafood sold in the U.S. to ensure that it is safe, legally caught, and honestly labeled.

Since 2011, Oceana has worked to expose seafood fraud in the U.S. In a nationwide study released last year, Oceana found that 33 percent of the more than 1,200 fish samples it tested were not accurately labeled, according to Food and Drug Administration guidelines. Click here to learn more about Oceana’s campaign to Stop Seafood Fraud, and visit www.oceana.org/shrimpfraud to access more materials related to the new shrimp report.