Uncovering Shrimp Seafood Fraud: Diaries from the Field, Part One

Yesterday, Oceana released a new report that uncovered widespread misrepresentation of America’s favorite seafood: shrimp. The report found 30 percent of DNA-tested shrimp samples to be misrepresented—often mislabeled for another species or said to be wild caught when it was farmed—across more than 100 restaurants and grocery stores nationwide. Some of the report’s wildest findings were uncovering an aquarium pet shrimp—banded coral shrimp in a bag of frozen wild salad shrimp—as well as uncovering many shrimp species not known to be sold in the U.S.

But, the results are only half the fun. Members of Oceana’s seafood fraud team—senior scientist Dr. Kimberly Warner and former science fellow Rachel Golden—road tripped around the Gulf of Mexico region to collect these samples, and had a great time along the way. Below, Rachel Golden shares the first installment of a two-part blog series about the life of a seafood sleuth. Stay tuned to learn more about this adventure!

Day 1: Diaries of a Seafood Sleuth

Welcome to the Gulf of Mexico! We have traveled a long distance to conduct an important mission: investigate seafood fraud. We’re particularly interested in the practice of intentionally mislabeling seafood, which may be done for economic gain. Previous studies at Oceana have shown that seafood fraud is a widespread issue in the United States and hinders consumers’ ability to make informed, sustainable, and healthy choices. Last year, we released a study revealing that one-third of more than 1,200 samples of fish we collected were mislabeled. Our studies show that swapping out, for example, a desirable red snapper for a cheaper tilapia could cost consumers hundreds of dollars annually. Seafood fraud also harms honest fishermen by skewing the perceived price of certain fish species; true red snapper fishermen must compete with the lower prices of fraudulent fish on the market. Given the scope of the issue, we are excited to get started sampling and investigate seafood fraud further.

What type of seafood should we investigate? Up until now, we have only studied finfish such as grouper and snapper, but haven’t delved into the interesting world of marine invertebrates (like crabs, oysters, and shrimp). We decided to focus our sampling efforts on shrimp, the most popular seafood in the United States. 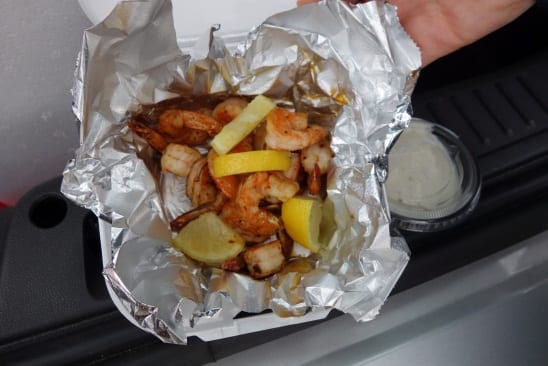 We’ve chosen the Gulf of Mexico as an ideal sampling site, as it is home to a large and vibrant wild shrimp industry. Family-owned businesses have shrimped in the Gulf of Mexico for decades and shrimp is a staple dish of choice for nearly every restaurant. Land-based shrimp farms are also a small but growing source of shrimp in Texas (see Figure 6).

We start planning our week: What kinds of shrimp should we collect? We decide to sample shrimp with specific labels such as “Gulf” and “wild” as well as shrimp without special labeling. This will give us a better idea of the types of shrimp available on the market.

We decide to purchase some “Gulf shrimp-n-grits” and “Buffalo shrimp” from restaurants in Mobile, Alabama, and tuck in for a delicious dinner. Not only do we get to engage in undercover science, but also we take the opportunity to savor some delicious southern cuisine. 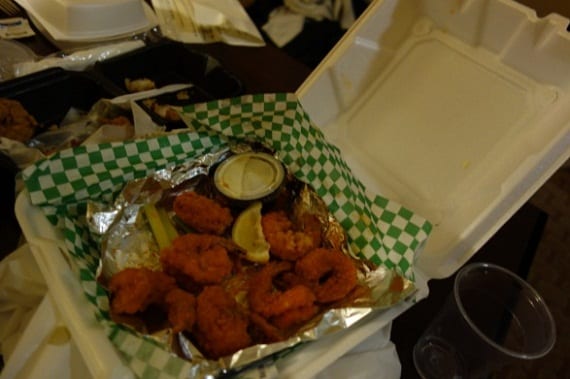 After a full day of traveling and sampling, we are full and sleepy. We dream of shrimp and wonder—will our shrimp samples be mislabeled? We will soon find out!

Day 2: Diaries of a Seafood Sleuth

Looks like a storm’s a brewin’! It’s day two of our Gulf adventure, and we’re caught in a tropical depression and experiencing some torrential rain. This, however, does not deter our seafood sleuthing efforts. We are up and out of bed early, ready for a full day of sampling. Today, we’ll visit several grocery stores and restaurants, conduct surveys, and purchase some shrimp. 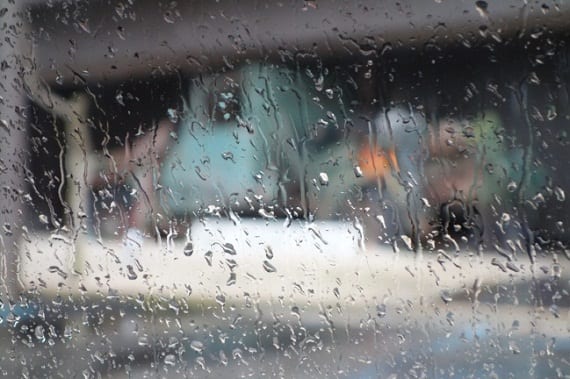 How do we sample seafood? If we’re sampling in a restaurant, the procedure requires some sneaking. We sit down for a meal, order a shrimp dish, and stash one shrimp into a small plastic baggie tucked away in a purse or tote bag. We then carry the shrimp out and process it later.

If we start in a grocery store, the process is a bit different. It is easy to purchase shrimp here for testing. But we also want to record how all shrimp for sale in a grocery store are labeled. We are trying to find out how much information shrimp shoppers typically are provided about the shrimp they purchase.  First, we prepare our recording device—I like to use my smartphone. We’ll use this to record the types of shrimp we see and the information printed on their labels. More sneaking ensues. We walk up and down the aisles and peruse the shrimp selections. We record information such as country of origin, price, and type of processing. Is it cooked and frozen in a box, or is it raw in a bag? This level of detail is important because some processed products sold in grocery stores are not required to be labeled with their country of origin.

At the very end of the day, we diligently process our seafood samples. To do this, we dissect the shrimp into tiny pieces and place them into little vials filled with non-toxic desiccant (drying) beads. We are careful not to cross-contaminate the samples, so we wash our equipment between each sample. We also fill out a datasheet for each sample to keep track of where we purchased it, the price, and other information on the label or menu. 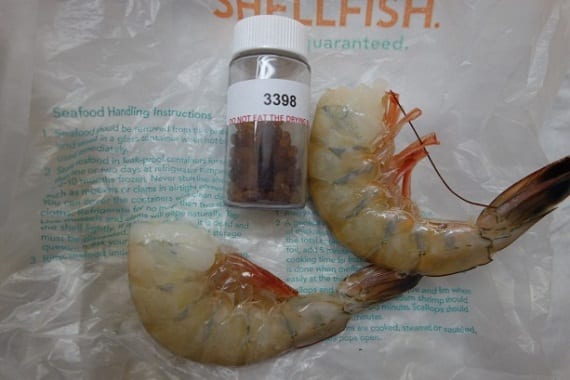 Even though we finish our sampling late into the night and return at 10:00 p.m., we still finish processing all samples before bed. Exhausted, we get ready for bed and gear up for another amazing day of sleuthing!