Far too often and for far too long, oil and gas companies have left their trash in the water. This year the U.S. Government Accountability Office reported that the federal government has allowed a massive number of pipelines to be abandoned instead of removed. Generally, companies must remove defunct pipelines from the seafloor, but the government can grant exceptions. These exceptions have become the norm. Since the 1960s, over 97 percent of all decommissioned pipelines in the Gulf of Mexico were left on the seafloor. That adds up to 18,000 miles of abandoned oil and gas pipelines, enough to stretch from DC to LA seven times.

Out of sight, out of mind is an unacceptable approach for industrial pollution.

Oil and gas companies ask the federal government to leave their pipelines on the seafloor because it is less expensive and easier for them; but taxpayers can end up paying for their removal instead. If the pipelines later pose safety or environmental risks, there’s often no clear way to hold the companies responsible for their removal. The government is typically unable to compel companies to clean up their old pipelines after previously allowing them to leave the pipelines in place. The government may be unable to even contact the previous operators because they may be bankrupt, liquidated, or unreachable.

Pipelines no longer in use may still contain oil or chemicals that can pollute our waters. Abandoned pipelines are left to the mercy of the waves and hurricanes with no active monitoring to ensure they are not leaking oil. As pipelines age they are more likely to corrode and spill oil and chemicals into the ocean.

Abandoned pipelines also get in the way of coastal restoration. Louisiana’s work to rebuild lost coastal land requires moving sand to build new wetlands and barrier islands. But, about 80 percent of the sand in the Gulf of Mexico that could be used to rebuild Louisiana’s coast is blocked by oil and gas infrastructure including pipelines. The pipelines make the restoration projects more difficult and costly.

The recent oil spill in California highlights the danger of oil and gas pipelines in our ocean and the need to move towards clean, renewable energy sources. A broken pipeline connected to an oil platform off the coast of Huntington Beach spewed tens of thousands of gallons of oil into the ocean. Dead birds washed ashore, and beaches and fisheries were closed. As always, oil disasters hurt our environment and coastal economies.

Every foot of pipeline in the ocean is another chance for pollution. There are 8,600 miles of active offshore oil and gas pipelines located on the seafloor of the Gulf of Mexico which are not reliably monitored for leaks. Double that mileage is no longer in use, but still taking up space on the seafloor and risking the health of our ocean for decades to come. Unfortunately, oil and chemical spills happen all the time. There were at least 7,000 oil spills between 2007 and 2018—an average of nearly two spills every day.

Responsible decommissioning should be part of all offshore energy development. Decommissioning infrastructure can create jobs, support local economies, allow the environment to recover, and support the clean energy transition.

The federal government must protect our coasts from offshore drilling. 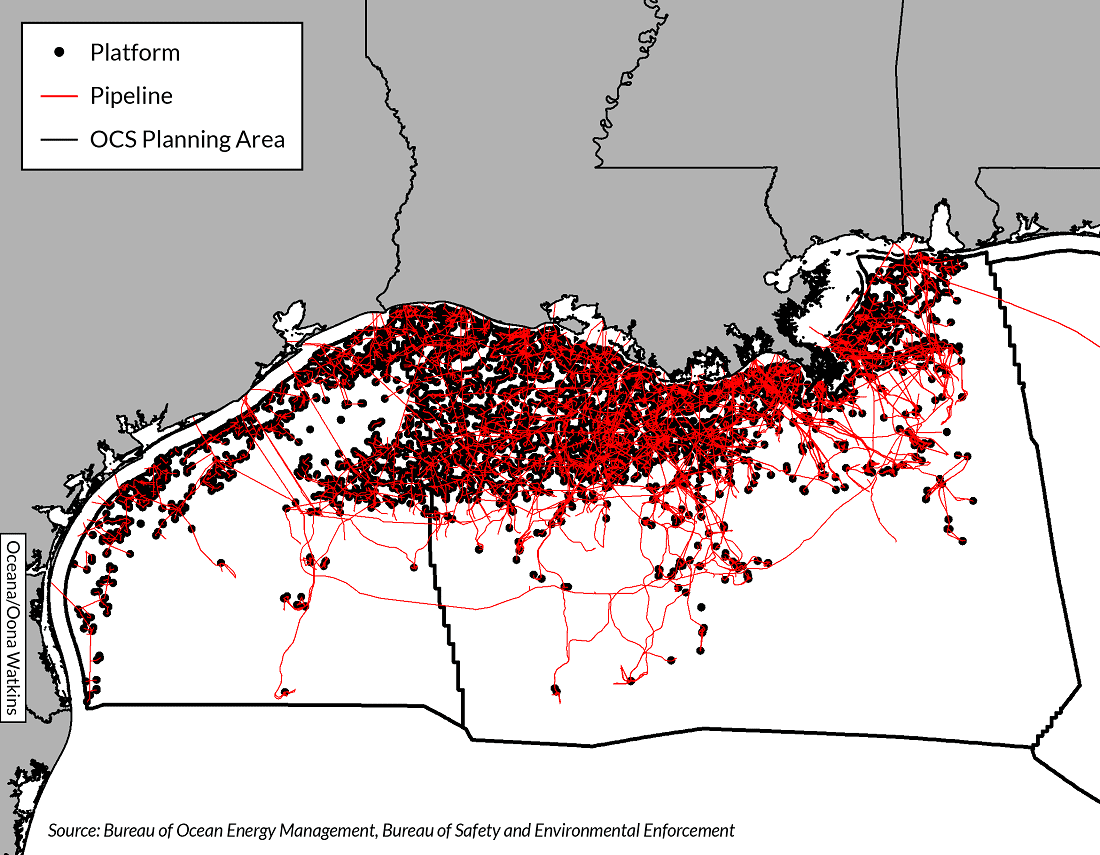