If you’ve ever witnessed a sea turtle nest hatch, you’ve probably noticed that it seems like these reptiles emerge from their nests in silence. Scientists have long assumed that too, but a new study adds to a growing body of literature that finds that baby sea turtles can in fact make noise—and this communication is key to a successful hatching  process.

In a recent study published in Chelonian Conservation and Biology, researchers examined leatherback sea turtle nests, and found that the hatchlings and embryos made multiple noises and sounds—indicating they’re communicating with each other in the days before they hatch. The scientists recorded more than 300 different sounds, and classified them into four unique sound types: chirps, grunts, and two “complex hybrid tones,” according to the Smithsonian.

“Detection of sounds from eggs of D. coriacea after 51 days of incubation at natural temperatures show that embryos that are close to full development are communicating,” write the authors. “Acoustic communication can be considered a cue for synchronized hatching, as suggested by others (Spencer and Janzen 2011).” 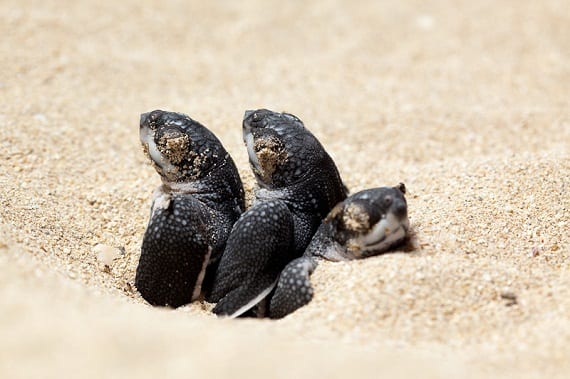 When sea turtle nests hatch, they largely emergence at once—often called a “nest boil” for the way they rapidly emerge from the sand. The study explains that this sound-based communication is important for coordinating such group behavior, and key to their hatching process. The researchers explain three main reasons for this behavior: coordinating boils to dig together to reach the surface, synchronizing hatching to reduce predation risk, and decreasing energy use.

The international team of researchers studied 12 leatherback sea turtle nests on Barra de la Cruz Beach, Oaxaca, Mexico. The researchers started monitoring sounds 51 days after the nest were laid—the time at which sea turtle ears should be fully developed, but before their average 53 to 62-day expected hatch time. They inserted microphones in sand close to the nests, and examined frequency, duration, and inflection points from recordings to classify sounds types.

Now knowing that sound transfer is critical to baby sea turtle coordination, this study carries broad implications for their conservation. From motor boats to other noises, the researchers note that anthropogenic noise may affect sea turtle hatchlings more than previously thought.