First a confession: I love cephalopods. In fact, if I could, I would surround myself with their squishy bodies and watch them wriggle and squirm. … OK, maybe that’s a little bit of an exaggeration, but I do really think they are cool. So, in keeping with the list format that Ben used last week, I will list a few of my favorite cephalopods and why they are so amazing. And since I am a deep sea science intern — they will all be deep sea species!

1. The Vampire Squid: No, it will not suck your blood or carry you off to a spooky castle. Actually this squid is only about a foot long but has amazing, beautiful, light-producing organs called photophores, which it can manipulate to frighten predators away.

2. The Seven Armed Octopus: So named because of the specialized arm that males have to deliver sperm, which they tuck under their right eye giving them the appearance of having only seven arms. It is also the largest species of octopus and can weigh as much as 165 pounds — quite a feat for a gelatinous blobby creature.

3. The Glass Squid: These guys just look like beautiful, delicate jewels to me. I know, I’m weird. Anyway, they have swollen, transparent bodies and short little arms. They are about as close to aliens as I think I will ever get.

4. Dumbo Octopus: Closely resembles the Disney character, except for the eight arms, 8-inch body and living in the abyss thing. … It flaps its “ears,” pulses its arms, and jets out water to move around the ocean floor looking for tasty snails and worms to eat. 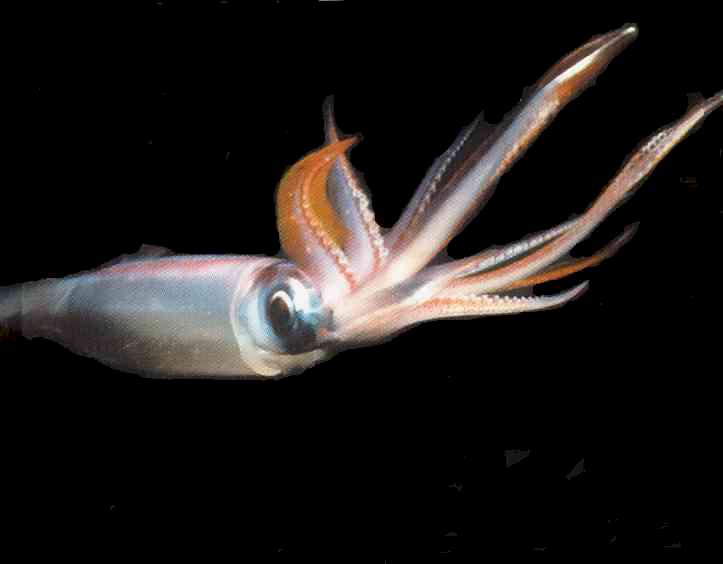 5. Colossal Squid: No list would be complete without the closest “relative” of the KRAKEN! This squid is the largest known invertebrate in the world, growing up to 46 feet long! Picture two 1976 Winnebagos bumper-to-bumper.

And of course there are many more exciting cephalopods lurking in the deep, hovering quietly, waiting for you to come close enough for them to wrap their arms around, but I can’t list them all! And there are probably some that haven’t even been discovered yet, which is why we need to protect them from deep sea disturbances like trawling.