CITES Listing Countdown: Less Than One Week until Hammerheads are Protected

On September 14, 2014, the Convention on International Trade in Endangered Species of Wild Fauna and Flora (CITES) will add seven sharks and rays to Appendix II, meaning that global trade of these species will be restricted. At Oceana, we work to protect marine species from overexploitation every day, so we’re thrilled about the new listings. To celebrate, we’re spotlighting all seven species that are receiving protections on September 14 in a series of countdown blog posts on The Beacon. We’ve focused on manta rays, porbeagle sharks, and oceanic whitetip sharks, and are now spotlighting a group of hammerhead shark species to be protected. Stay tuned for a final blog post on Sunday!

As the three largest hammerheads in the Sphyrnidae family, their fins are some of those most commonly found in the international shark fin trade. According to studies from 2006, these three species comprised six percent of the fin market in Hong Kong, and that 1.3 to 2.7 million scalloped and smooth hammerhead sharks were used in the shark fin trade each year, reports Shark Advocates. Since hammerhead shark meat is generally not desirable, hammerhead sharks are often finned and then thrown overboard to die at sea. These species are also taken as a target species and as bycatch in pelagic longlines, fixed bottom longlines, and pelagic trawls. 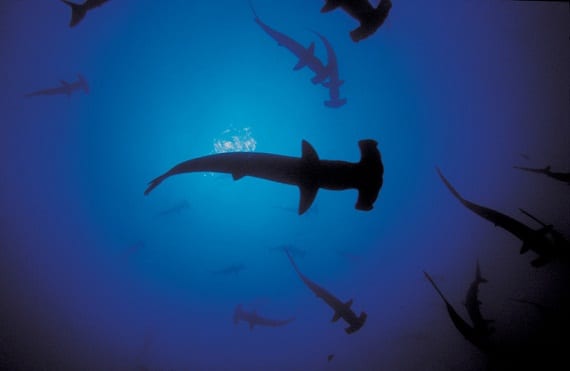 A study published this summer found that hammerheads may be “evolved for extinction,” meaning that the very traits that allow hammerheads to survive for 450 million years now may be making them even more vulnerable to human fishing pressures. For example, smooth hammerheads travel in highly complex schools, but this makes them a particularly vulnerable and predictable target. Being slow to grow and having low reproduction rates also make them susceptible to overexploitation.

This summer, four populations of scalloped hammerheads became the first sharks to be protected under the Endangered Species Act. While that is good news for this species, the National Marine Fisheries Service denied great hammerhead sharks protection in June, and did the same for smooth hammerhead sharks in 2013. This news disappointed many conservationists and environmental groups since these species are so rapidly declining. Despite that ruling, the International Union for Conservation of Nature lists both scalloped and great hammerheads as endangered and smooth hammerheads as vulnerable.

Under the new protections in the Appendix II listing, the take and trade of scalloped hammerhead, great hammerhead, and smooth hammerhead sharks will be controlled in an effort to protect them from further exploitation. They will join whale sharks and basking sharks, which were protected in 2003, great white sharks, which were protected in 2005, and the four other sharks and manta rays to be protected this month. These seven species received the Appendix II designation at CITES’ 16th meeting of the Conference of the Parties in March 2013, but the changes did not take effect for 18 months to allow Parties to work out technicalities of the listings.

Great hammerheads are the largest of the hammerhead shark species, reaching nearly 20 feet in length, and are found in temperate and tropical waters worldwide. Scalloped and smooth hammerheads can grow to about eight feet long and have a similar distribution.