On September 14, 2014, the Convention on International Trade in Endangered Species of Wild Fauna and Flora (CITES) will add seven sharks and rays to Appendix II, meaning that global trade of these species will be restricted. At Oceana, we work to protect marine species from overexploitation every day, so we’re thrilled about the new listings. To celebrate, we’ll be spotlighting all seven species that are receiving protections on September 14 in a series of countdown blog posts on The Beacon. We’ve focused on manta rays and porbeagle sharks, and are now spotlighting oceanic whitetip sharks. Stay tuned for more!

Oceanic whitetip sharks are aptly-named and easily distinguishable from other shark species for the rounded whitetips on their fins—as well as the deep, offshore waters that they prefer. Once considered to be an abundant species frequently seen in pelagic waters, oceanic whitetip sharks are now rarely spotted on the high seas. Bycatch in longline and gillnet fisheries have significantly contributed to the decline of this species, where tens of thousands might be captured around the world each year.

Of the various threats oceanic whitetip sharks face from fisheries, the international demand for their fins poses the greatest risk to this species, according to Shark Advocates International. Oceanic whitetips are one of six species most frequently found in the fin trade, primarily used for shark fin soup in China and Hong Kong. Whitetip shark meat has a low value compared to the fins, so their bodies are typically thrown out to sea and left to bleed to death after being finned. 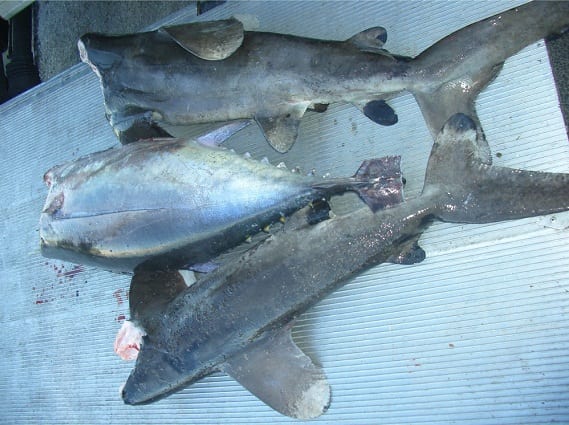 Juvenile oceanic whitetip sharks (Carcharhinus longimanus) and a tuna unloaded from a long liner in France in 2007. (Photo: Oceana / LX)

Under the new protections in the Appendix II listing, the take and trade of oceanic whitetip sharks will be controlled in an effort to protect them from severe population declines. They will join whale sharks and basking sharks, which were protected in 2003, great white sharks, which were protected in 2005, and the four other sharks and manta rays to be protected this month. These seven species received the Appendix II designation at CITES’ 16th meeting of the Conference of the Parties in March 2013, but the changes did not take effect for 18 months to allow Parties to work out technicalities of the listings.

Oceanic whitetip sharks are found in temperate to tropical pelagic waters worldwide. They’re a larger shark species, growing to about 11 to 13 feet, and can weigh several hundred pounds. Their preferred prey includes bony fishes like barracuda and tuna, as well as stingrays, sea turtles, and squid. They’re known to have aggressive feeding patterns, so scientists caution humans to be careful when diving around this species.