Did you know that coral reefs are home to about one fourth of all marine life? As the most diverse of the marine ecosystems, they’re aptly nicknamed “rainforests of the sea,” says the Smithsonian. With all of the spawning, feeding, and other activity occurring on coral reefs, it’s no surprise that coral reefs are actually pretty noisy environments.

But, as human activity like overfishing takes a toll on coral reefs, a new study published in Marine Ecology Progress Series found that the reefs are growing quieter. The researchers recorded sound among various coral reefs around the Philippines, and found that noise production at degraded reefs was one-third of the sound level around noisy reefs.

To reach this finding, the scientists took field recordings of both protected and unprotected coral reefs around the Philippines, and compared them to fish noise levels to help determine the quality of coral reefs. Not only were the unprotected reefs quieter, but the researchers also found that sound did not travel as far as it did from the protected reefs, says the study. 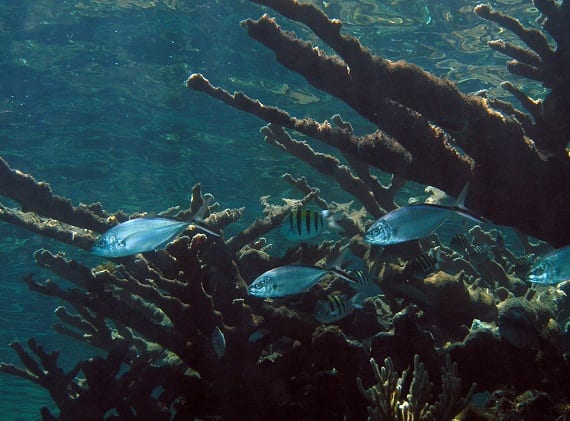 Since acoustics play an important role in fish larvae navigation and attracting new crustaceans and fish to the reef, these results hold significant implications for fish and other marine life, says a press release. In fact, with degraded reefs, larvae have ten times less of an ability to detect these coral reefs.

Thus, these findings also reveal that acoustics are a useful tool in monitoring coral reef health, says the study, and it adds to a growing body of knowledge that shows just how much acoustics affect marine life.

Click here to listen to the difference between a protected and unprotected reef.