Could This Be One of the last Atlantic Bluefin Tuna? 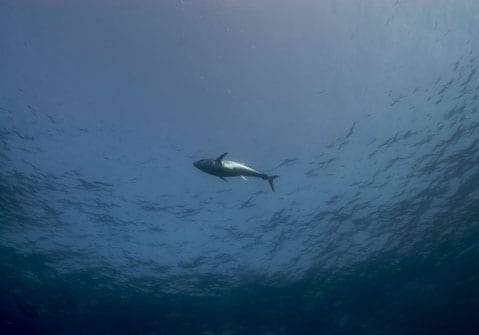 “If only we could pull out our brain and use only our eyes.” – Pablo Picasso

Beneath the surface at a depth of 25m/80ft in the Mediterranean Sea, I watched a single bluefin tuna swimming all alone. At that moment, I felt a sense of urgency that populations are really collapsing and disappearing. Then I imagined what life must have been like only a few years ago as abundant schools of breeding bluefin tuna passed in and out of these waters on their annual migration.

Not far away, armed with highly efficient and sophisticated fishing technology, I could hear the obtrusive sounds of fishing boats, nets extending into the water and the panic of the other tuna as they raced to save their lives. With fishing quotas exceeded in only one month, the Atlantic bluefin tuna is in real danger of becoming extinct from overfishing to satisfy a voracious Japanese sushi market. I wonder if we can control our desire for instant financial gratification trends in cuisine to maintain a sustainable and healthy future.

Yet despite all the regulations in place, the reality of overfishing and consumption is all too real. Removing all other factors — social, political, financial — if we know the Atlantic bluefin tuna numbers are declining, then I’ll ask the question, “If not now, then when should we start to conserving and protecting this spectacular living animal for future generations?” I hope it is not until there is only one tuna left in the Mediterranean Sea.

On behalf of the Atlantic bluefin tuna, I ask everyone to reduce their consumption of this precious fish and for fisherman to adhere to the European Union’s Commission decisions to stop fishing, as the fishing quotas for the year 2008 have already been filled.

“There is a sufficiency in the world for man’s need but not for man’s greed.” – Mohandas Gandhi