Forget the brown and gray stingrays that you’re used to—the blue-spotted ribbontail ray (Taeniura lymma) puts their drab coloring to shame with its olive skin and large, neon-blue spots. Also known as the blue-spotted fantail ray, these vibrantly-colored creatures are found on coral reefs throughout the Indian and western Pacific oceans.

Unlike other stingrays, the blue-spotted ray doesn’t bury itself in the sand to hide from predators. Instead, this ray makes sure that its brilliant blue spots are visible because they signal that the ray has a deadly defense—venomous spines in its blue-striped tail. If threatened, the ray can flip its tail and stab predators. 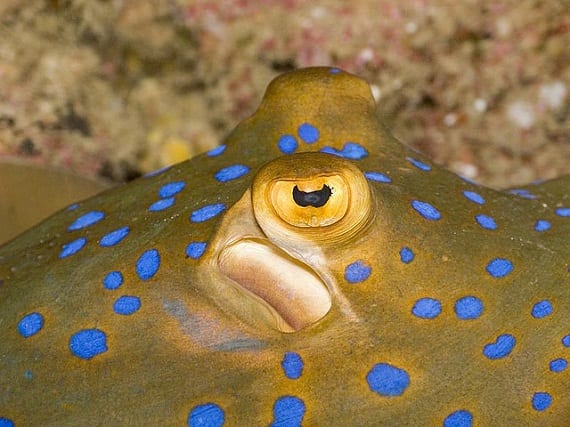 To help its spots stay bright and visible, the blue-spotted ray visits “cleaning stations” on the coral reef, where small fish and shrimp pick bacteria and dead skin off the ray’s body. This mutualistic relationship benefits both the stingray and its helpful cleaners—the ray stays healthy and the other creatures get an easy meal.

Blue-spotted rays are also adept predators. They hunt for crabs, shrimp, and mollusks using electroreception, sensing the electric fields given off by other creatures. The rays then pin their prey down on the sand and crush it between two hard tooth plates in their mouths. 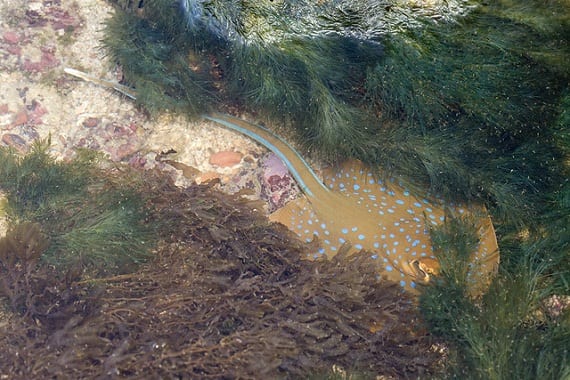 Blue-spotted rays are threatened by destructive fishing practices, habitat loss, and the aquarium trade. You can help Oceana protect these colorful creatures by adopting a blue-spotted ray for a friend or family-member this holiday season. Visit the Oceana adoption store to learn more, and check back for more Creatures Features on The Beacon.