There’s no doubt that harp seal pups are perilously cute. But did you know that once they grow up, these seals migrate thousands of miles each year?

Named after the dark, harp-shaped patterns on the backs of adult seals, harp seals are widespread in the chilly waters of the North Atlantic and Arctic Oceans. They spend their summers far north, and then migrate south each winter to breed on the pack ice.

Snowy-white harp seal pups are born on the ice between late February and early April. At birth they weigh about 22 pounds, and their mother’s high-fat milk quickly helps them gain a whopping five pounds per day. After the 12-day nursing period pups bulk up to around 55 pounds. Then the female harp seals abandon their pups on the ice and begin breeding again. 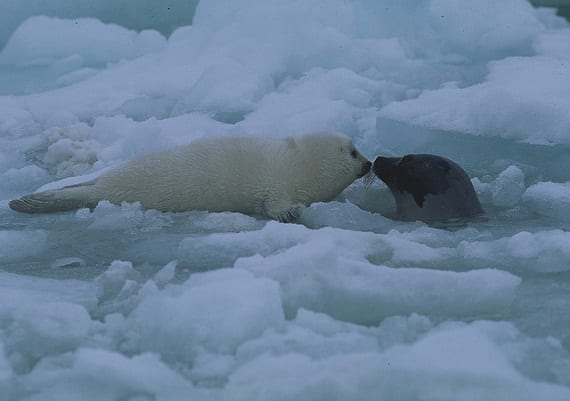 The pups stay put on the ice for up to six weeks, losing nearly 50 percent of their body weight because they aren’t ready to feed at sea. They also shed their white coats, growing a silvery-grey coat with black spots. The spots along their back gradually grown as they get older, and eventually merge into the distinctive harp-shaped pattern when seals reach sexual maturity, at about five years old.

Harp seals are highly migratory, traveling up to 3,000 miles round-trip each year. The seals spend the summer in their northern feeding grounds, hunting for fish and crustaceans. In September they begin the journey south to their breeding grounds. There are three different populations of harp seals, and each group has a distinct breeding area and migration route. The Northwest Atlantic population breeds in the Gulf of St. Lawrence, Labrador, and Newfoundland, and then migrates north to Hudson Bay, Baffin Island, and northwestern Greenland for the summer. The second population breeds on Jan Mayen island, north of Iceland, and spends its summers between Svalbard and Greenland. The third group breeds in the White Sea, and then migrates north to the Cara and Barents Seas. 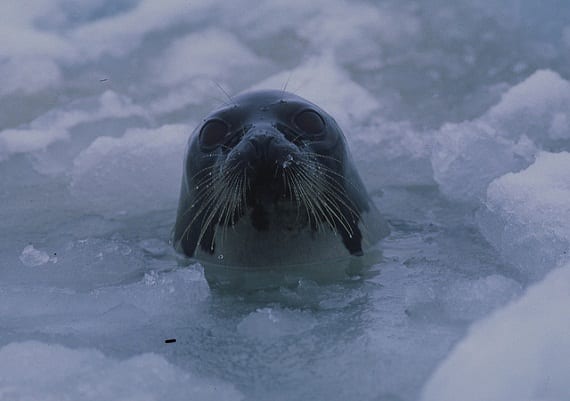 Ocean pollution and climate change pose serious threats to harp seals. You can help Oceana protect them by adopting a harp seal for a friend or family-member this holiday season. Visit the Oceana adoption store to learn more, and check back for more Creatures Features on The Beacon.