If you’re an ocean lover, you’ve probably heard of the mighty leatherback sea turtle—the largest of the seven sea turtle species. Leatherback sea turtles can grow over six feet in length, and weigh more than 2,000 pounds.  Besides their massive size, their unique appearance makes them easily distinguishable from the other sea turtle species. They lack a solid carapace, and instead have a dense layer of black, leather-like tissue, for which they’re aptly named. Researchers recently discovered that the pink spots on their heads act similarly to a “skylight,” cluing these reptiles into sunlight patterns that inform their migration and feeding behaviors. 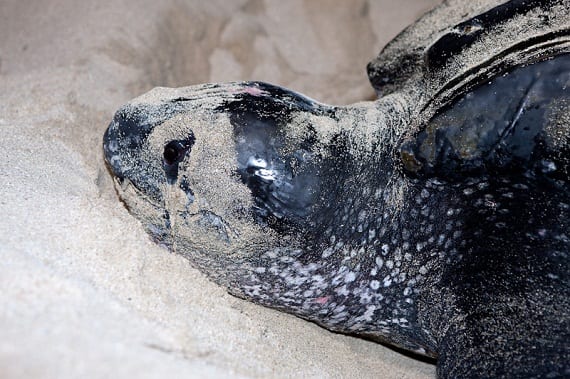 Leatherbacks also have the widest range of any turtle species and reptile. They’re primarily found in pelagic temperate and tropical waters across the globe, ranging from New Zealand to the Mediterranean Sea and South America, but sometimes enter coastal waters to forage or nest. In the U.S., the biggest leatherback nesting grounds are in the Caribbean along the U.S. Virgin Islands and Puerto Rico, as well as southeast Florida. Leatherbacks also have the longest migrations of any sea turtle species, traveling an average of 3,700 miles from their breeding and feeding grounds.

When female leatherbacks come ashore to nest, they haul themselves out of the ocean and crawl towards a desired beach nesting spot—typically picking beaches within their natal range. Leatherback nest clutch sizes average around 100 eggs, which resemble ping pong balls in shape and are slightly larger than other sea turtles’ eggs. Like many reptiles, sex determination is temperature dependent, with average nest incubation temperatures above 85° Fahrenheit predominantly producing females, and below that producing males. As soon as leatherback hatchlings crawl from their nest, often called a “nest boil” for the way they all crawl from the sand at once, they face a range of threats, like falling prey to hungry sharks and birds or being injured by beach or vessel traffic. It’s estimated that only one in 1,000 leatherback sea turtle hatchlings make it to adulthood. 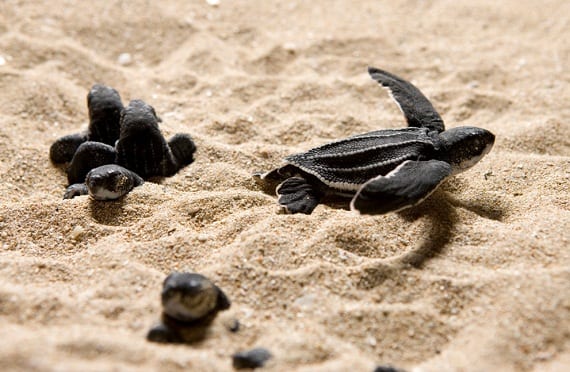 Leatherback hatchlings crawl out of their nest in the U.S. Virgin Islands. (Photo: Tim Calver / www.timcalver.com)

Leatherbacks lack the strong, crushing jaws of other sea turtle species, like loggerheads, and instead have sharp jaws and tooth-like structures that are well adapted for dining on open-ocean prey like jellyfish and squid. They can dive more than 4,000 feet deep—making them the deepest-diving sea turtle species—and stay submerged for up to 85 minutes.

These large reptiles are listed as endangered under the Endangered Species Act, and vulnerable under the IUCN Red List of Threatened Species. Some of their biggest threats include poaching and drowning in fishing gear, including gillnets, longlines, and trawls. Leatherbacks, as well as many other sea turtles, often confuse floating plastic bags for jellyfish, which can cause them to choke and die. Other threats include pollution, coastal development, and disease.

You can learn more about leatherback sea turtles on Oceana’s Marine Encyclopedia, and take a look below for more photos of this beautiful species. 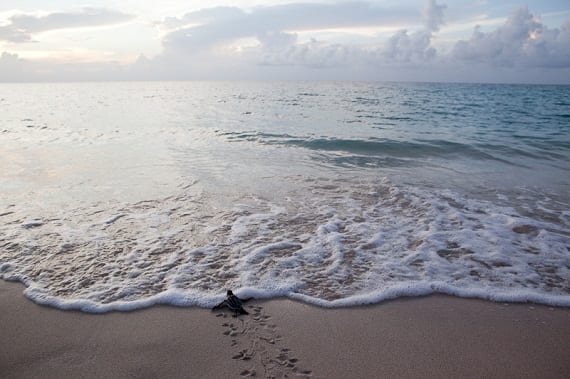 A leatherback hatchling in the U.S. Virgin Islands starts his journey to the ocean. (Photo: Tim Calver / www.timcalver.com) 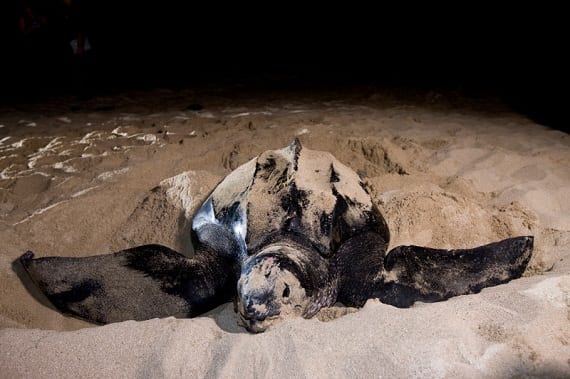 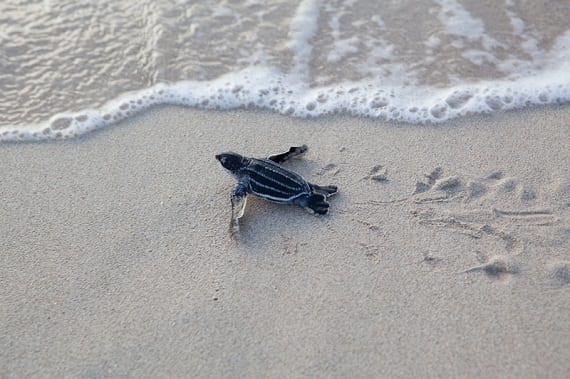