It’s venomous, voracious, and taking over reefs across the western Atlantic.

This strange-looking predator is a lionfish, a.k.a. Pterois volitans. Native to Indo-Pacific reefs, lionfish are anything but subtle. The large, striped spines protruding from their bodies are their main defense, filled with neurotoxic venom to deter predators. While the venom isn’t deadly to humans, running afoul of a lionfish isn’t fun—side effects include excruciating pain, headaches, difficulty breathing, and vomiting. Lesson learned: don’t mess with a lionfish.

Though lionfish are native to the Indian and western Pacific oceans, since the late 1980s they’ve been turning up on the other side of the world. Snorkelers and fisherman from North Carolina to Venezuela can now spot these freaky-looking fish in their home waters. Their introduction to the Atlantic was likely the result of accidental (or intentional) releases from aquariums and fish-owners. Lionfish are considered a particularly nasty invasive species because they chow down on native fish—a lot of native fish. An estimated 70 species end up as lionfish dinner, which spells trouble for local ecosystems. One study found that when lionfish arrive in a new Atlantic reef, they reduce native fish populations by a whopping 65 percent. 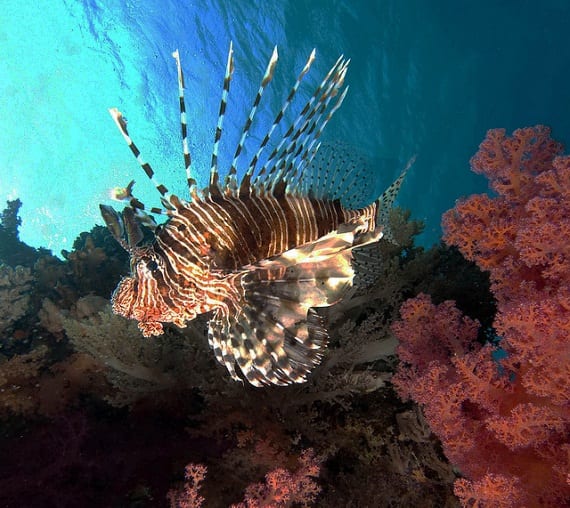 Since lionfish have no major predators, the National Oceanic and Atmospheric Administration (NOAA) is encouraging the public to catch and eat them by the dozens to help reduce the population. Adventurous foodies shouldn’t worry about gastronomic disaster: lionfish are venomous, not poisonous, meaning you can safely enjoy a nice lionfish filet as long as you avoid the spines. Best of all, lionfish are absolutely delicious. They have a flaky, white flesh that’s already featured on Southern and Caribbean menus.