If you’re a fan of sea turtles, you might have heard about the mighty loggerhead sea turtle. Growing 2 to 3 feet long and weighing in at a massive 165–350 pounds, loggerheads are heavier than many people. These reptiles are actually the second-largest marine turtle (only the leatherback is larger.) Named for their hefty heads, loggerheads are found in tropical and temperate waters around the world. Their big jaws help them capture jellyfish and crack down on small crabs living on the seafloor.

Female loggerheads lay three or four nests in one breeding season, but they don’t always breed every year. Each nest contains about 100 eggs, which take around 80 days to incubate in the warm sand. Temperature is very important for loggerhead eggs, because it determines the sex of the hatchlings. Warmer temperatures, around 90 degrees Fahrenheit, will produce an all-female clutch, while cooler temperatures of 82.5 degrees produce a group of males. If temperatures in the nest hover in the middle, around 86 degrees, then the clutch will be a mix of males and females.

Loggerhead hatchlings are tiny—just 2 inches long. After hatching at night, they dig up through the sand and scramble to the safety of the water. Researchers know very little about how these young sea turtles live out at sea (they affectionately term this stage as the “lost years”), but most swim out to deep waters to feed and grow, often using floating beds of Sargassum algae for food and shelter. Once a little older, sea turtles in the North Atlantic often undergo an 8,000-mile journey across entire ocean basins lasting between six and 12 years. 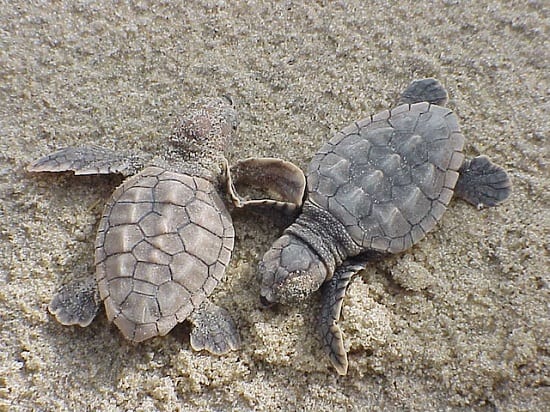 Loggerhead hatchlings get ready for a dangerous trek to the water, dodging hungry predators like seabirds and foxes. (Photo: U. S. Fish and Wildlife Service – Northeast Region)

All loggerhead populations are listed as either endangered or threatened under the Endangered Species Act. Tens of thousands of sea turtles are injured or killed every year in the Atlantic and the Gulf of Mexico by harmful fishing gear, like trawls, gillnets, and longlines. Habitat loss is another major threat to loggerheads. Critical nesting beaches are littered with trash, eroded by rising seas, and bulldozed to build hotels and apartments.

The government is required by law to protect loggerheads, and they recently proposed designating nearshore areas as critical habitat. But the government’s long-overdue proposal does not go far enough to give loggerheads the protections that will ensure their recovery and survival. The proposal only includes waters up to one mile from the shoreline, but nesting females usually travel much farther out to sea in-between trips to the beach to nest. It also doesn’t protect areas where loggerheads are known to gather in large numbers to feed and rest. Loggerheads are also threatened by fisheries and marine pollution, but the government’s proposal ignores these threats. Lastly, the proposal fails to protect any habitat for the endangered population of North Pacific loggerheads. Take action and help Oceana tell the government to step up protections for loggerheads. 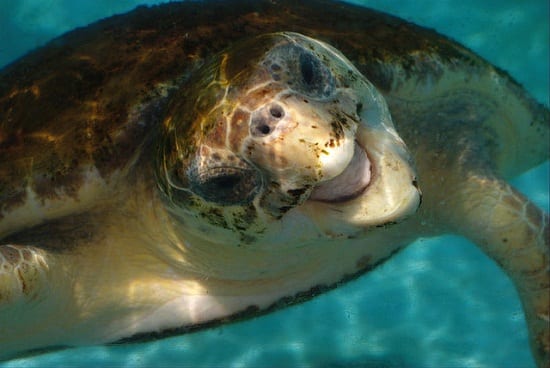