Magnificent frigatebirds aren’t the beauty queens of the bird world, but they do get points for bold style. These seabirds have a seven foot wingspan and an inflatable, bright-red throat sac under their bills that they used in elaborate courtship displays. Only the males have these sacs—female frigatebirds have a non-inflatable white neck, making them the only seabird species where the males and females look very different.

During mating season, male magnificent frigatebirds perch together in groups to seduce nearby females. Throat sacs inflated, they wave their heads from side-to-side, clatter their bills, and shake their wings. Female frigatebirds find this flamboyant display utterly irresistible. 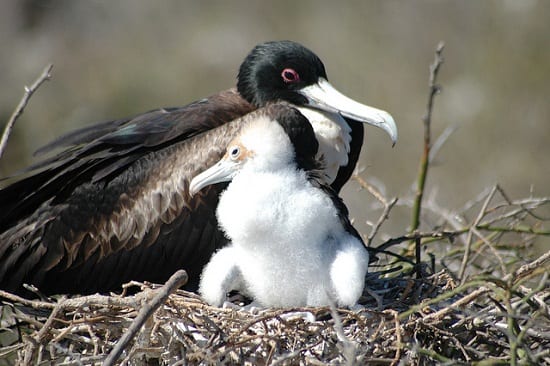 Though they usually breed south of the United States, magnificent frigatebirds wander northward along the Florida coast during the winter. They also have a nearly-identical Pacific cousin, the great frigatebird. Both species use their huge wings to cruise for hours over the open ocean, often spending entire days and nights aloft. They’re one of only two birds known to sleep on the wing—the other is the common swift. Unusual for a seabird, magnificent frigatebirds rarely land on the water, preferring mangrove perches instead.

Frigatebirds have a reputation as bullies: when they’re hungry they attack and chase other seabirds. Stressed and terrified, the birds vomit up their last meal, which the frigatebirds happily eat. They’ll also hunt fish on their own, snapping them up from the water as they fly above the surface.

So the next time you see a jaw-droppingly strange seabird overhead, say hello to the magnificent frigatebird! 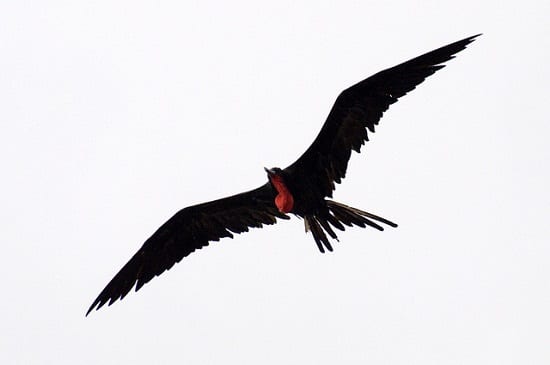 There’s no way you can mistake this high-flier for another bird. (Photo: Marc AuMarc)