When it comes to sea creatures with superhero powers, the common octopus (Octopus vulgaris) might take the cake: with jaw-dropping camouflage abilities, ink, and incomparable intelligence, the octopus is every marine biologist’s dream (and every prey species’ nightmare).

Perhaps the most incredible of the skills in the common octopus’s arsenal is its camouflage ability – by contracting or expanding a network of pigmented areas in cells called chromatophores and specialized muscles in its skin, the octopus can almost instantaneously match the colors, patterns, and even the texture of its surroundings. This unbelievable ability allows the octopus to lurk seamlessly among its surroundings, hiding it both from would-be predators and unsuspecting prey.

The common octopus is no slouch in the brains department, either, with the largest brain of any invertebrate. The octopus has 130 million neurons in its brain (humans have about 100 billion neurons), but, somewhat freakily, three-fifths of an octopus’s neurons aren’t in its brain – they’re in its arms, giving each arm, quite literally, a mind of its own. Researchers have found that if an octopus’s arm is cut off, not only does the octopus regrow the limb (an important skill for evading predators), but the severed limb continues to crawl around on its own, and, if it comes into contact with food items, the limb will grasp the food and attempt to pass it to where the mouth would be if the limb were still connected to the octopus’s body. 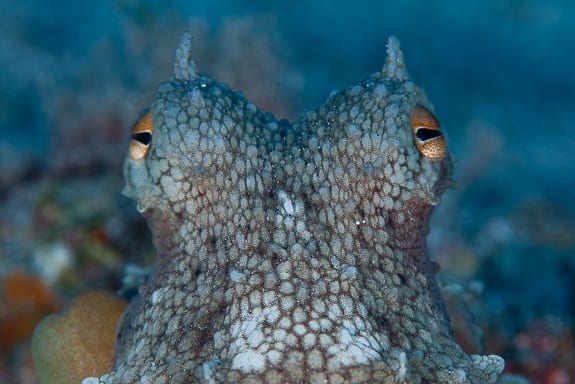 If discovered or threatened, the common octopus shoots a cloud of black ink to obscure its attacker’s view, giving the octopus the chance to swim away. The ink also contains a chemical that dulls a predator’s sense of smell, making it harder to track the fleeing octopus. If all else fails, the common octopus can also squeeze its soft body into tiny cracks and crevices to evade pursuing predators (the octopus can squeeze its body into holes as small as a quarter!) 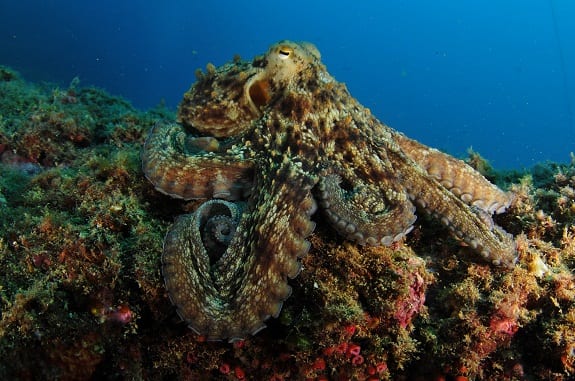 …and did we mention that the octopus has three hearts? The common octopus is one of the oceans’ most incredible creatures, and one that we love dearly with all of our (single) heart!