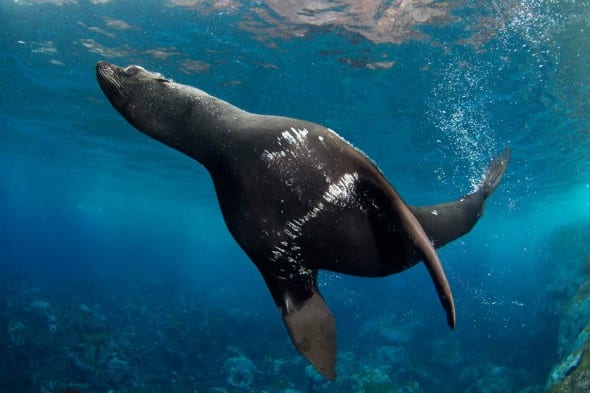 When we think of predators, our minds often picture large animals with sharp teeth and scary faces, animals that have evolved just to kill humans. Our collective memory makes us fearful of the night, and almost everyone has been startled by unknown noises in a dark forest. This fear has been engraved in our collective unconscious like carvings in a rock. When it comes to the ocean, many people still fear sharks (despite repeated evidence that sharks are the ones who should be scared of us) or deep alien creatures that hide in the darkness to attack unexpectedly.

The top predator at the Desventuradas is not the typical reef shark, or a grouper with a huge mouth able to swallow a diver. It is not a fearsome animal that kills at night either. The largest predator here is the Juan Fernández sea lion (Arctocephalus philippi), the cutest carnivore we have found in any of our Pristine Seas Expeditions to date. They spend much of the day hanging out on rocky platforms near the water. When we approach them, it’s like someone brought free candy to a school. The sea lions raise their heads, get indeed very excited, and drag their fat bellies from rock to rock until they jump in the water. 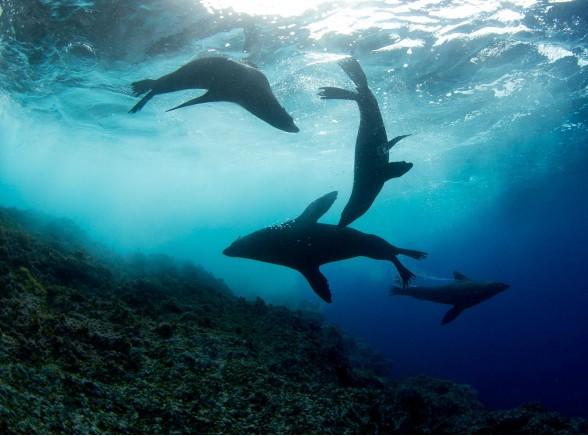 The Juan Fernández sea lion is the cutest carnivore we have found in any of our Pristine Expeditions to date. (Photo by Enric Sala)

Underwater, the sea lions become torpedoes of enormous grace and elegance. Their eyes are large as a Japanese cartoon character’s, and their looks pierce us as they swim very fast between us divers. After playing with our bubbles and checking us out very closely, they just hang out, their backsides on the surface and their heads hanging down like bats. 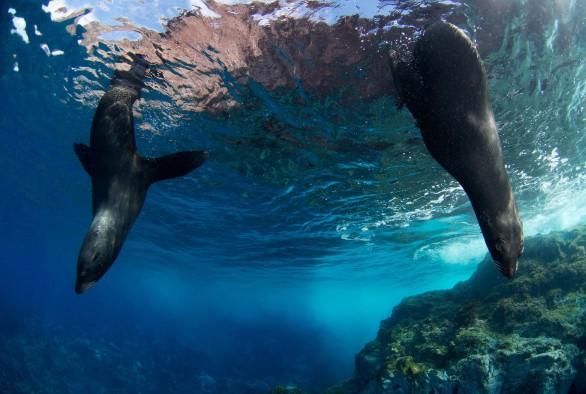 A supple spine and a blubbery outer layer allow a sea lion to twist, stretch, and compact itself into ever changing forms, making the “true shape” of a sea lion almost impossible to describe. (Photo by Enric Sala)

The Juan Fernández sea lion lives only in the Desventuradas Islands and the Juan Fernández archipelago (800 km south of the Desventuradas). It was very abundant before European whalers and hunters started to exterminate them. In the Juan Fernández archipelago between three and five million were killed for their skins and their oil between the 17th and the 19th centuries. In 1880, the scientific community of the time thought them extinct. Fortunately, a few individuals survived and were able to start replenishing their population. In 1970, about a hundred years after they had been seen for what was thought the last time, two juvenile sea lions were observed at San Ambrosio. In 1975, 300 individuals were observed.

We have seen only five sea lions at San Ambrosio. The strong winds have restricted our work to the northern side of the island. Also, the Chilean Navy did not allow us to dive around San Félix Island, where there is a military base. Therefore we cannot determine whether there are still hundreds of sea lions in the archipelago. That is a shame, for not many scientific parties ever make it here. I only hope that the sea lions are coming back, and that the restricted access will keep them safe.