Dancing with a blue whale 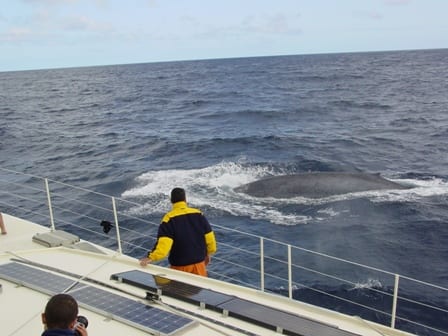 The weather started to change. There is a 20 knot wind that allows us to navigate towards the east, at a speed of eight knots. It is not bad at all. The sea is agitated, the waves swell up, but is manageable. It is not an easy task moving around the ship without having to hold on here and there, or work on the computer, but the two hulls of the catamaran provide for an enviable stability nevertheless. For now, nothing is falling or sliding off, as is so common in ships with conventional hull.

This afternoon has been extraordinary. After lunch, I was on my cot when I heard voices and hustling outside, and one of my companions knocking loudly against the glass hatch connecting my cabin to the deck, trying to wake me up. I went upstairs as fast as I could, towards the messroom where I bumped against Bibi, the boatswain, who was coming down yelling: “Xavier, there is a whale!” I went to deck expecting to see a whale at a distance, but instead, I found myself staring at an animal swimming barely one meter from the ship, measuring 13 meters long, emerging just as I was coming up on deck. I had to retreat to get my camera and wait for the successive appearances of the animal. Everyone was on the prowl to get photographs.

The whale did not let us down. It seemed to be playing with the Ranger and we even went on a race. It swam at times by starboard side, stretching almost half the length of the ship or going under the ship, where we could see it through the net extended between the prows of the two hulls. It emerged again and again, at least half dozen times, and accompanied us for at least twenty minutes. It would surface and look at us when it blew air, then it would arch its back and submerge again for three or four minutes. After it tired of the game, it disappeared, leaving us all wet from the splashes and fascinated by what we just witnessed.

When we recovered from the experience, those of us who took photographs dashed to download the photos onto the computers. The best of them are, no doubt, Nuño’s. Instead of crowding around deck to be as close to the cetacean as possible, which most of us did, Nuño had the sense to remain higher up at the bridge, which gave him the best perspective of the deck area and the surrounding sea. He set his camera on high speed and got an excellent representation of the spectacle we have witnessed.

The absence of white spots on the fins and the size of the animal told us that we were not in the presence of what in English is called a minke, the smallest and most common type of whale. The next logical conclusion was that this was a common whale or fin whale. But there was something amiss there too. It had the tiny dorsal fin, almost vestigial, situated towards the back; the skin clearly covered in grayish speckles and the whale had a very flat skull. Indi, Nuño, Carlos, Alice, Bibi, Sole and I checked the cetacean guide books we had onboard and compared the information with the photographs we had just shot and the picture was becoming clear: the Ranger had just had en encounter with a blue whale, an animal placed at the edge of extinction by whaling ships.

There is no evidence if the populations left are recuperating since the International Whaling Commission implemented a moratorium on commercial whale hunting two decades ago. The specimen we just saw was probably a juvenile of the largest animal species on the planet of which only a few hundreds are left among the north Atlantic populations.

The sighting presented us with another interesting consideration. When Nuño consulted the nautical chart to register our position during the encounter (36.07 N, 51.32 W), it coincided exactly with the location of the Rockaway Seamount, an underwater mountain towering 6,000 meters from the sea floor, whose summit comes 800 meters from the surface. It is an excellent example of the high seas ecosystems that Oceana and other conservation organizations are intent on protecting from bottom trawling and other aggressions, advocating for the prohibition of these type of activity in vulnerable areas such as these.

Was it a coincidence that the blue whale was in that exact area? Maybe. Whales do not live in one place on a permanent basis; they travel through the oceans following seasonal migration patterns. However, its presence in Rockaway fits in perfectly with our arguments in favor of the protection of underwater seamounts. These are areas whose geography produces upwelling phenomena, an outcrop of nutrients carried by vertical water currents from the bottom to the surface of the water. Consequently, they become areas populated by dense biodiversity, with great biological richness, making it an oasis in the midst of biologically poorer areas. They are like stopovers along the way, where migrating species find food and where other organisms spend their entire life.

Today was not a bad day at all. No one can be bored here.