Oceana launched a campaign to save dusky sharks this past summer, but these fantastic divers beat us to it! Read on to learn about an uplifting story of a dusky shark rescue in the Bahamas.  It’s sure to make your day!

While on their annual A Cotton Photo photography workshop this past spring, the crew of Epic Diving—a dive company operating throughout the Bahamas—had a unique encounter with a dusky shark.

It all started when a large (seven-to eight-foot long) but emaciated adult male dusky shark with a deep wound around his head, just behind his gills, swam near the dive boat during an oceanic whitetip expedition.

“We could tell he was injured, but were not really sure how bad it was,” Epic Diving owner and operator Vincent Canabal told Oceana.

Typically, dusky sharks are quite bold and territorial, he explained, but initially, this individual was quite shy.

“The first day we saw Atlas, he was very shy and didn’t come close to any of the divers or other sharks, and left the scene quickly,” he said. But two days later, he came back. The crew and several others on the expedition were already interacting with five oceanic whitetip sharks (which you can see in the photos below) when Atlas “came right up to the group.”

“At that point, we could see the extent of the wound and how thin/starved he was.” They noticed the wound was made by a large rope embedded in his flesh. The rope was wrapped so tightly that it was pinning down one of his pectoral fins. Based on the severity of the wound, Vincent and the others guessed that the rope have been there for at least several weeks.

After seeing the wound, “the whole group agreed that we should try to intervene and help the shark out,” Canabal said. To avoid any unnecessary safety risk, the rest of the group remained on the boat while Vincent and Debra Canabal, and Amanda Cotton, the expedition leader, attempted to cut the rope and free the shark. 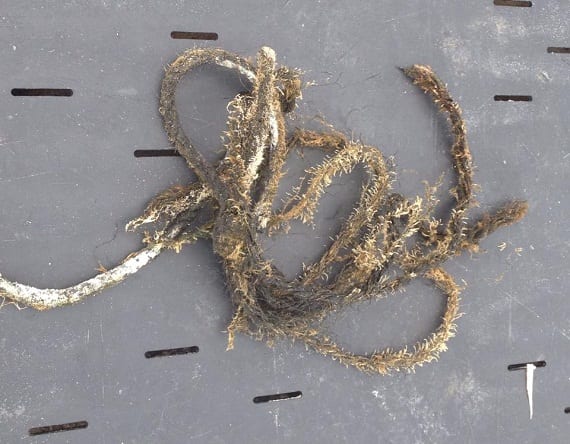 “Atlas came right up to us and seemed to stop swimming, allowing me to get the rope up out of the wound and cut it off using shears. Once the rope was cut, the shark actually rolled over completely, unwrapping himself. As soon as the rope was removed, the whole boat erupted in cheers and everyone was thrilled that we were able to get it done,” Canabal said. “After that, Atlas remained at the side of our boat for the rest of the day, and the entire group had the opportunity to interact with him.”

We often hear stories about divers untangling marine mammals that seem to ask for help and even show gratitude (or what we interpret as gratitude) after the gear is successfully removed. Vincent explained that his experience wasn’t necessarily like this.

“I can’t be certain if he was asking for help or not,” he said. “As a pelagic shark, it’s unlikely that he had encountered humans before. I would think that he observed us for a while and got the sense that we were not a threat. He was probably comforted by the fact that there were other sharks there. 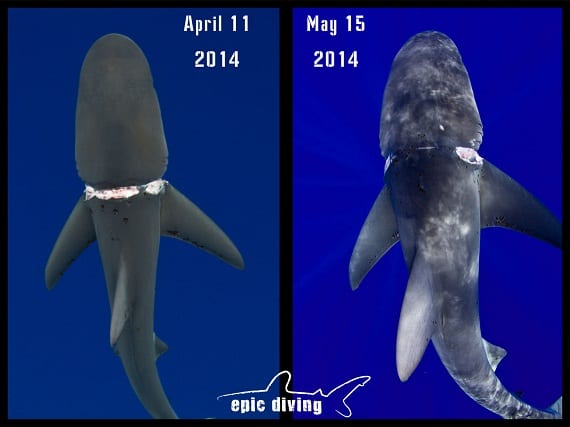 Atlas, before and after the rescue. (Photo: Epic Diving)

He was never threatening in his approach toward any of the divers, so we did not feel like there was danger. We knew that trying to remove the rope would be risky and possibly lead to a dangerous situation, but also knew that he would surely die if we didn’t help.”

After the rescue, Atlas stayed with the group for a few hours before the boat left for the day. About a month later, Atlas caught up with the Epic Diving team again, looking much healthier.

“The wound had healed significantly and he clearly put on some weight. He was a regular at the boat, showing up almost every day for the remainder of the season.”

The successful rescue “was truly one of the most rewarding experiences of my career diving and interacting with sharks. We see so many injured animals, typically from hooks/fishing gear. This was one experience where we were able to help a shark that was clearly suffering from an injury caused by human trash in the ocean. The fact that the shark came back to our boat on a daily basis and we were able to monitor his healing was a great reward.”

Meet Atlas and Other Dusky Sharks in Person!

With Epic Diving, you can see sharks year-round. Oceanic Whitetip Expeditions run from March through June out of Cat Island. Because dusky sharks are pelagic species, like the oceanic whitetips, the crew often encounters them during these expeditions. For the remained of the year, the team heads to Grand Bahama Island to run Tiger Shark Expeditions.

Epic Diving specializes in “conservation minded shark tourism.” For the owners, what started as a fascination with sharks grew into a recognition that sharks need protection. By bringing divers on “safe, up-close encounters” with many shark species in the Bahamas (including tigers, oceanic whitetips, lemons, hammerheads and more), Epic Diving owners Vincent and Debra Canabal aim to change people’s perception of sharks in order to inspire action and further shark conservation.

Oceana’s Efforts to Save Dusky Sharks

Dusky sharks (Carcharhinus obscurus) are certainly not the most famous shark species, but they are a species in trouble. Overfishing and incidental take in fishing activities—known as bycatch—are estimated to have caused an 85 percent decline in dusky shark populations. In 2000, the National Marine Fisheries Service started prohibiting the take of dusky sharks, but they have since not taken any action for protecting dusky sharks from bycatch.

For that reason, Oceana launched a campaign this past summer to save Northwest Atlantic dusky sharks. Through this public awareness campaign, a fictional dusky shark is making appearances across the country, encouraging the federal government and other stakeholders to protect this species before it’s too late. Click here to learn more about Oceana’s campaign, and you sign up here to help support dusky sharks.