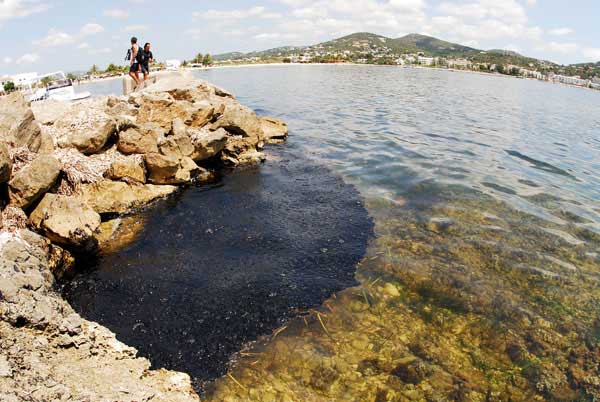 Yesterday, we continued to study the sea floors around Cabo de La Nao.

We carried out a couple of dives with the divers between Isla de Portixol and Cape San Martin. Again, we spotted gorgonians, including the white sea fan, the yellow sea fan, many nudibranchs, cardinal fish with their eggs in their mouths, conger eels and many other fish. Posidonia oceanica was present on the sea floor, along with large banks of salema fish.

We used the ROV for only one dive, because when we were preparing the second dive, we heard the news about the Don Pedro in Ibiza. We decided to pick up and head towards Denia to fill up the tanks and sail to the Balearic Islands.

We reached the area in the morning, at approximately 7 a.m. The first thing we noticed was the strong smell of fuel and then we saw the oil slick and amongst it, a group of bottlenose dolphins.

After sending letters to the Maritime Authority in Ibiza, to the SAR team and the local government of the Balearic Islands offering our collaboration, especially using the submarine robot to analyze the ship’s hull, we travelled around the affected area to assess the situation.

The oil slick extends various miles towards the southeast coast of the island, especially around the port where the merchant ship had sunk. For the most part, the oil slick was not very dense although larger, thicker slicks were concentrated in other areas.

As we passed over the area where the accident took place, we could clearly see the bright yellow merchant ship on the sea floor at 43 meters depth. Two small vessels belonging to the local Balearic government were working in the area, removing as much fuel as they could. Further north, the SAR vessel Clara Campoamor was carrying out its job, and occasionally a second vessel could also be seen in the area. Later, some airplanes flew over the area and provided information about the location of the denser slicks to the vessels in charge of removing the oil.

We were surprised that no beacons had been installed and there were barely any anti-contamination barriers. The truth is everything was strangely calm, as if nothing out of the ordinary had happened there. Only the divers seem to be taking it seriously, as they work to seal the cracks so no more fuel leaks out into the ocean. They are the ones who are working on site at the wreck, trying to remove as much fuel as they can.

Soon after, the oil slicks started to appear on the coast and the first radio alerts were given about the closing off of beaches.

Although this is the area with the heaviest summer maritime traffic in Spain, there is practically no infrastructure in place to fight against spillage or to respond when there is an accident. And the same occurs off most of the Spanish coast. We still don’t have satellite detection systems for spills or many other things necessary to be prepared for a disaster.

After sailing a few miles around the affected area, we anchored and waited for a response, but 12 hours later, we’re still waiting.

We’ve gone to see the beaches, rocks and coves in the area, where the oil slick was beginning to pile up and some workers started to remove it. We spoted the first oil-stained animals: cormorants stained with fuel, crabs, barnacles and coastal algae completely smothered in oil and fish swimming between the slicks. As the day went on, new oil slicks reached the coast.

Luckily, it wasn’t a large tanker that wrecked, although in isolated cases, the contamination is serious. We are, however, feeling quite discouraged. We realize no lessons have been learned, that the same mistakes are made over and over again.

After six o’clock that night, when the recreational fishing boats come back to port after spending the day at sea, another pitiful scene takes place: yachts sailing all around the SAR vessel, from stem to stern, on all sides. All the vessels were sailing at high speeds, making waves and causing the oil slicks to pass over the containment barriers. Since there are no beacons in place, the port has not been closed and no system is in place to detour maritime traffic, the returning yachts created the same chaos they always do when coming back into port.

But the people in charge of removing the fuel really became angry when another vessel belonging to ISCOMAR, the same shipping company that owns the Don Pedro, passed by at high speed and caused waves that made pure venom come out of the VHF radio.

If it weren’t for the seriousness of the event, this would look like one of those funny Mediterranean movies.

Tomorrow we’ll see if the authorities give us any news. We don’t want to take action on our own because this type of work needs to be coordinated in order to avoid hindering the removal of the fuel and the work of the divers.