Exploring Marine Snow: A Nutritious and Vital Type of Snowfall for the Deep Sea

Snow: Aside from it being beautiful and peaceful, it’s widely celebrated by children and adults alike for building snowmen, sledding, and perhaps receiving a few “snow days.” As we move further into winter and many regions begin to see increased snowfall, did you know that the oceans have their own type of snow—one that falls all year?

Marine snow refers to detritus—dead and decaying plant and animal material, sediment, sand, and other organic material—that drift from the upper or mid layers of the water column and drift to the seafloor. As these particles fall, they clump together and former larger particle sizes, helping them to reach the seafloor much faster. 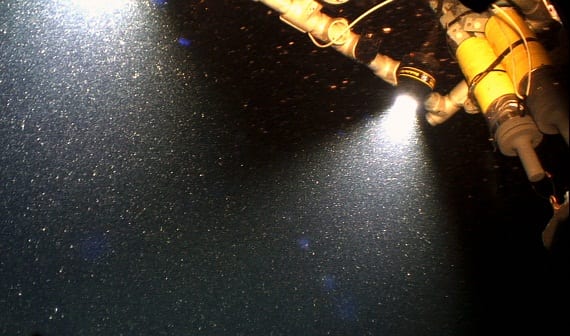 In fact, National Atmospheric and Oceanic Administration reports that the deep sea floor builds about 20 feet of this organic material every million years. And by using sediment traps, scientists have found that the seafloor traps 815 million tons of carbon per year —making them extremely important carbon sinks, according to the Smithsonian Ocean Portal.

Despite the continuous descent of marine snow, many of these organic clusters don’t actually make it to the seafloor; instead, many marine animals feed on this incredibly nutritious material along the way, making marine snow the backbone of many deep-sea creatures’ diets and food webs. For example, scientists only recently discovered that this detritus is the main food source of the ghoulish-looking vampire squid, which uses long filaments to trap and cover the particles in balls of mucus before eating them. Additionally, tiny tadpole-like larvaceans build mucus net-like structures to capture falling marine snow, says the Monterey Bay Aquarium Research Institute.

Take a look below to catch marine snow drifting to the seafloor. Now, when it snows this winter, you can appreciate the snow that falls both above and below the ocean’s surface.