A Field of Spectacular Bamboo Coral 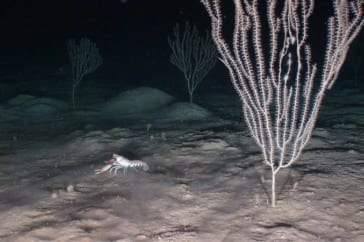 Two ROV submersions and a dredger in Ses Olives in the South are the result of a fairly complete day. This mount, some 20 nm to the east of Ibiza is the one we were looking at before the ROV broke down, and we have returned here to continue documenting its deepest slopes and beds. We had the opportunity to film three hours of seabed in the morning and about four hours in the afternoon with a dredger to collect a sample of the type of seabeds between submersions.

The two submersions have been very, very interesting, but we have to stress the luck we had in the second one in stumbling upon a field of bamboo coral or Isidella elongata, one of the most important deepwater species, considered as a sensitive habitat whose protection is being internationally claimed. This species of gorgonian has practically disappeared entirely from the Mediterranean as it grows in typical muddy trawling areas. This is why it is practically impossible to find specimens anymore like the ones we found today after almost half a mile of searching. It seems that the location of a submarine cable, that prevents trawling in this area, has saved this field and the biodiversity it maintains, from disappearing from trawling.