Since a lot of what happens in the oceans is hidden from view, the issues we discuss here on the blog can often be abstract and hard to visualize.

That’s why starting today, I’ll be featuring an ocean infographic by artist Don Foley each week. These infographics also appear in Oceana board member Ted Danson’s book, “Oceana: Our Endangered Oceans and What We Can Do to Save Them.”

I thought I’d start with one of the most mysterious players in the ocean: fishing gear. I don’t know about you, but I’ve never actually seen any of these in real life (have you?), so I find this infographic quite helpful: 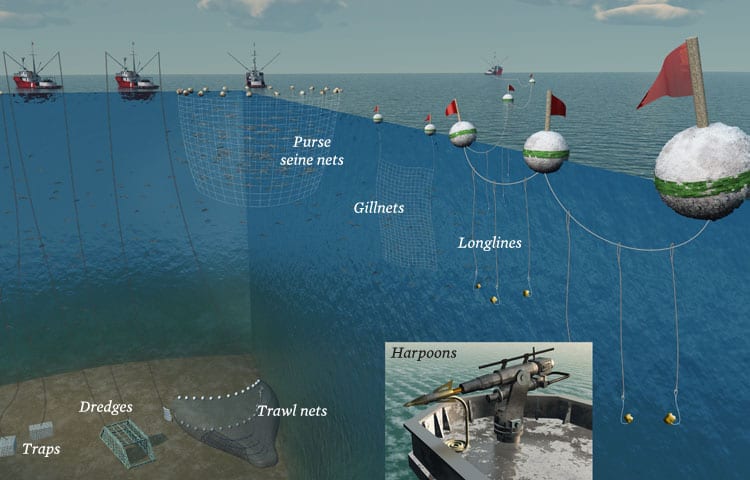 Dredges catch scallops and fish by dragging across the seafloor. They can crush corals, catch sea turtles, and dis­turb all kinds of seafloor life.

Purse seine nets catch schooling fish like tuna by en­circling the school with a wall of netting. They can cap­ture dolphins and other natural predators feeding on the school.

Trawl nets catch shrimp, cod, haddock, and other fish. Bottom trawls drag weighted nets across the seafloor, crushing corals or any other marine life in their path. Bot­tom trawls also discard more unwanted fish than almost any other form of fishing and are extremely destructive. Midwater trawls drag large nets through the water to catch pollock and other schooling fish, and when their nets are full, they may also drag on the bottom.

Gillnets are one of the most widely used methods in the world for catching salmon and sharks. When not closely tended, gillnets can entangle and drown sea turtles, sea­birds, and marine mammals. Some gillnets also snag large numbers of juvenile fish, which contributes to overfishing.

Longlines catch tuna and swordfish with miles of baited hooks that also capture sea turtles, sharks, and endan­gered sawfish. One longline can have thousands of hooks.

Read more about fishing weaponry and see a larger version of this infographic, and come back next week to ogle more ocean visuals!