Friday Infographic: The Rise and Fall of a Coral Reef

This is part of a series of ocean infographics by artist Don Foley. These infographics also appear in Oceana board member Ted Danson’s book, “Oceana: Our Endangered Oceans and What We Can Do to Save Them.”

Coral reefs cover around 1 percent of the world’s continental shelves, yet they provide habitat and food to at least a quarter of all species in the oceans, including 4,000 species of fish. These diverse habitats also provide food, income and coastal protection for some 500 million people. 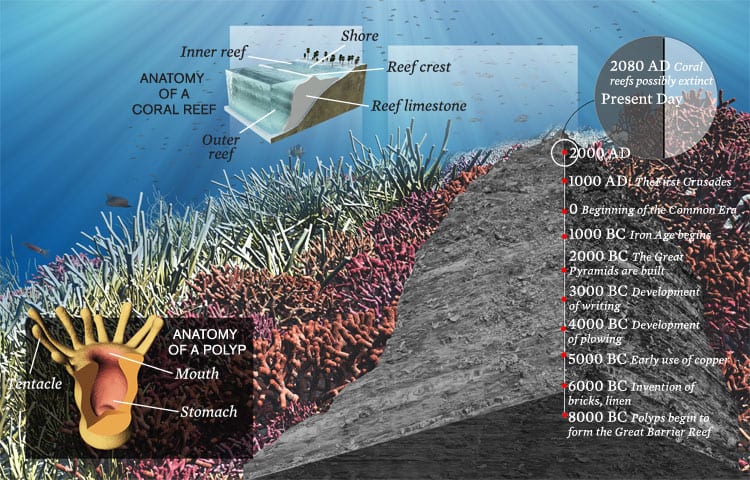 But coral reefs and the species that rely on them are increasingly threatened by an invisible menace: ocean acidification. Thanks to human-produced carbon dioxide emissions, the oceans are now 30 percent more acidic than they were prior to the industrial revolution and more acidic than at any point over the past 20 million years. Corals and other species are unlikely to be able to adapt to this rapid change in acidity and are likely to suffer severe decline.

Coral reefs are built by tiny, soft coral animals, or polyps. These polyps are relatives of jellyfish and have evolved to secrete calcium carbonate skeletons that provide the polyp with structure and protection.

Colonies of hundreds to thousands of polyps live together as corals and can build huge reef structures over many years. Not only are coral reefs some of the most diverse habitats on Earth, but they are also some of the oldest. Corals grow only millimeters to centimeters per year, and it can take tens to hundreds of thousands of years for large reefs to form.

You can help protect coral reefs by telling your Senators to reduce carbon emissions and stop ocean acidification.