Friday Infographic: What is Trawling?

This is part of a series of ocean infographics by artist Don Foley. These infographics also appear in Oceana board member Ted Danson’s book, “Oceana: Our Endangered Oceans and What We Can Do to Save Them.”

Bottom trawls, enormous fishing nets that are dragged across the sea floor, clear-cut everything living in their path. The mouths of the largest nets are big enough to swallow a Boeing 747 Jumbo Jet, and trawls and dredges can destroy century-old coral reefs in mere moments. 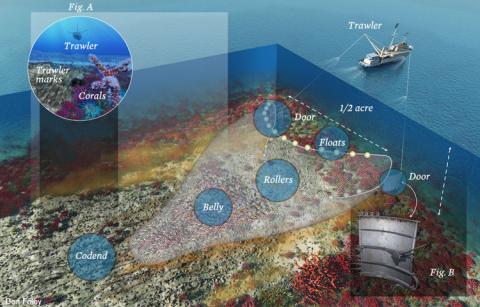 How Extensive is the Damage? (Fig. A)

• The largest deep-sea bottom trawling ships—“supertrawlers” —are 450 feet or longer (the length of 1.5 football fields).

• A large trawler can drag over a half-acre swath of seabed with one pass.

• Each year, the world’s fleet of bottom trawlers disturbs a seabed area twice the size of the contiguous United States.

• Deep-sea trawling destroys seabed habitat at a faster rate than the aggregate loss of the world’s tropical rain forests.

• European scientists have calculated that bottom-dragging trawlers in the North Sea destroy 16 pounds of marine animals for every pound of marketable sole that is caught.

Heavy doors keep the mouth of the net open and on the seafloor. Rubber and steel rockhoppers roll across the seafloor, while floats lift open the net above them.