The Good, the Bad, and the Ugly: EU Fishing Subsidies 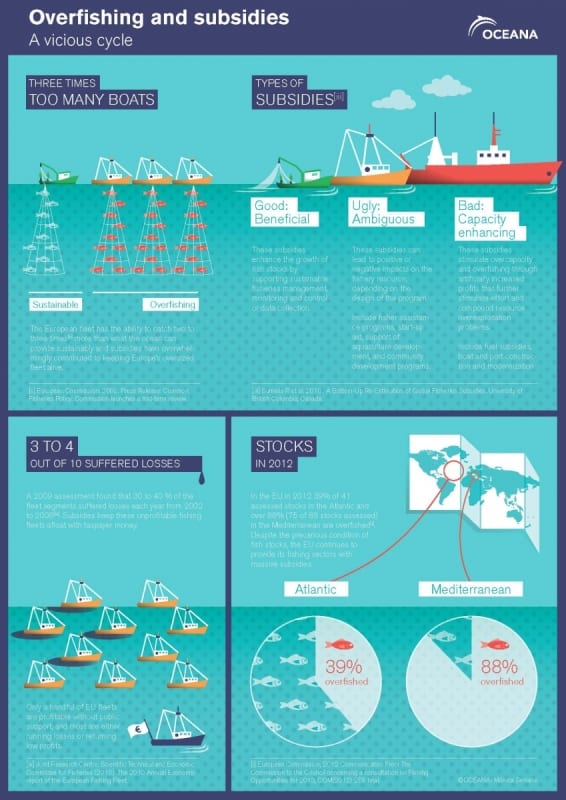 Yesterday, Oceana released the results of a six-month study on European Union (EU) subsidies to the fishing sector since 2000, and the results were shocking. Our report showed that 4.9 billion euros in subsidies were granted in the form of “state aid” for the fishing sectors, with most of this €4.9 billion ($6.3 billion) fueling overfishing and environmentally harmful practices. Our estimates show that of this €4.9 billion, only 1% can be identified as beneficial to the marine environment. To add insult to grave environmental injury, despite the EU’s commitment to transparency, we found that information on how tax payer money is being spent and allocated to these fishing subsidies is both scarce and unclear.

“Public funding should be used for the public good – while that seems obvious to most of us, it doesn’t seem to register with Member States when it comes to funding the fishing industry. Over the past 13 years only 1% of state aid subsidies have gone to directly benefit the very environment and resource that the industry relies on”, stated Xavier Pastor, executive director of Oceana in Europe.  “When you consider the poor state of EU fish stocks and the degradation of the marine environment, and look at the fact that 65% of these subsidies are feeding into these very problems, one cannot help but be outraged.”

Since signing the UN Law of the Sea, the EU has declared itself dedicated to ensuring the management and conservation of its living marine resources. Over the past decades, however, the discrepancy between reality and rhetoric has become increasingly clear – many of Europe’s fish stocks have been overfished for decades. This overfishing is fueled by huge fishing subsidies that have allowed European fleets to fish longer, harder, and over wider expanses than would otherwise be economically and ecologically feasible.

Many European fleets could not survive without these subsidies; the European Union and its Member States are thus using taxpayer money to keep alive a fleet that has the ability to catch two to three times more than what the ocean can provide sustainably. 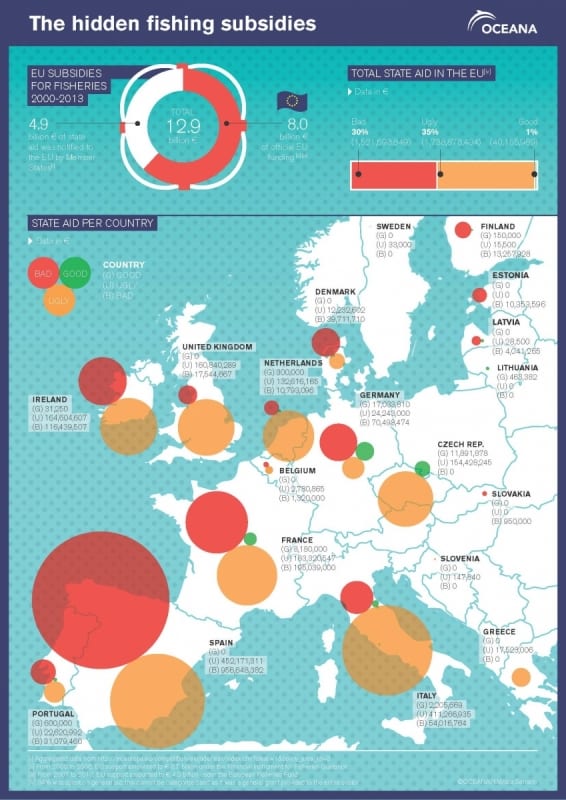 “Oceana urges the members of the Committee to stop the vicious cycle of overfishing and overcapitalization of European fleets and end subsidies that fuel overfishing,” explained Vanya Vulperhorst, policy advisor at Oceana in Europe. The EU should exclude environmentally harmful and capacity-enhancing subsidies and financially support the protection of the marine environment through the creation of marine protected areas, the increase of fisheries controls, and investment into scientific research.

Just yesterday, we celebrated a huge EU victory with the adoption of a strict ban on all shark finning. Tomorrow, a decisive vote on the new financial mechanism for the fisheries sector, the European Maritime and Fisheries Fund, will take place in the Fisheries Committee of the European Parliament. There is no question that the European Union can adopt the practices and regulations needed to bring its fishing under control. The only question is, will they choose to do so?