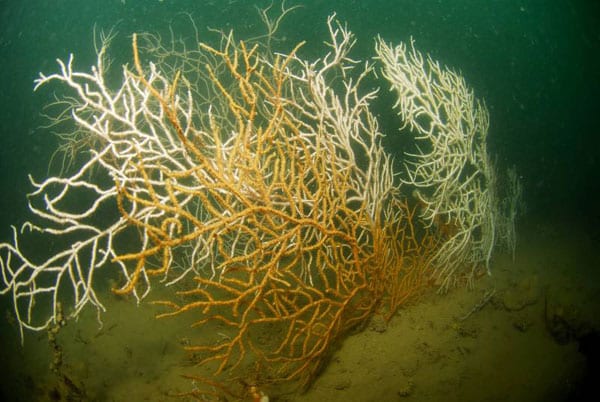 Today, no one had hopes of finding anything exceptional on the sea bed. After five months of campaigning, the crystal-clear waters of the Mediterranean and the marvelous ecosystems we’ve observed, it’s difficult to make everyone understand the importance of these waters and their riches.

That’s why, when we submerged the ROV after mapping the area with the sonar, we were completely dumbfounded when a dense forest of gorgonians appeared before our eyes. We saw gorgonians that were probably hundreds of years old and reached up to 2 meters in height and Dendrophylla corals rooted in a rocky sediment, covered by a fine layer of mud. The area was so dense that each movement made by the ROV was a threat to some of these animals, so we cancelled the dive with the ROV and the divers will continue in the afternoon.

The divers collected all the graphic material they could during a difficult dive with such poor visibility that they had to stay close together in order to not get lost. After speaking with Ricardo Aguilar, we found out the majority of the gorgonians were different species belonging to the Leptogorgia genus.

We set sail towards Mazagón to spend the night, still impressed by what we’ve seen.