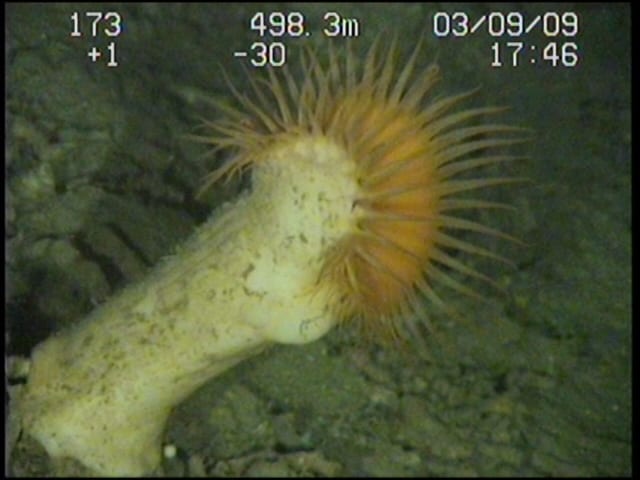 We are still in the southern islands. Today, we worked in front of Mogan again, protected from the trade winds.

Pitu had an intense day today piloting the ROV; we did three dives south of Grand Canary. We went down to 540 meters for the first time!

We had a few surprises. For starters, while the ROV was descending to approximately 410 meters, a thresher shark passed by us, directly in front of the camera. And as soon as we reached 540 meters…we were very surprised by the communities we identified. There were abundant sponges in a variety of colors on the rocky seabed, especially sponges in the shape of chupa-chups lollipops.

Oceana had already documented similar sponges in the Alboran Sea and in the deep waters of Galicia, possibly from the Stylocordila genus. But in this case, white lollipops were blended with blue ones, and we have yet to identify this species. It is surprising to see these colors at such depths.

And the last surprise was a solitary Venus flytrap anemone on the muddy seabed, which bears the name of the carnivorous plant it resembles. It looks like Ricardo made some kind of deal with the archipelago’s communities. Most mornings, he would wake up and say something like, “and today, it would be perfect if we found a…” and then… He would say a long name in Latin. That’s how our day started: we wanted to find a Venus flytrap anemone.

Cristina Fernández from the Oceanographic was with us. For years, she has been working on issues concerning conservation, science and the dissemination of information throughout the islands. She’s a diver, so she knows these areas quite well. But, looking at the screen, she couldn’t hide her surprise as the ROV descended to 500 meters right before her very eyes. She no longer has to imagine the scenery.