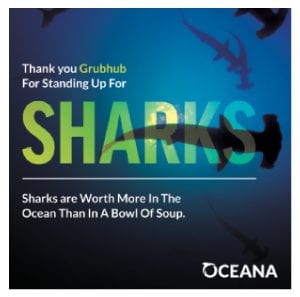 Today, we celebrate a huge step towards protecting sharks, many of which are threatened with extinction. Grubhub, the popular online food delivery service, has banned the sale of shark fin products through its website and subsidiaries. It is joining the ranks of other companies like UPS and Marriott in rejecting the trade and transport of shark fins, and is the first food delivery service to take a stand for sharks.

Shark fin soup may not be everyone’s first seafood choice. But internationally, and especially in some Asian countries, the dish is a status symbol, and a single bowl can sell for up to $300. Shark finning, the practice of cutting off the shark’s fins, is less palatable. Since only the fins are used in the dish, the rest of the shark is often wasted—mutilated and tossed overboard to bleed to death, starve, suffocate, or become prey. Mmm… shark fin soup.

Oceana works to protect shark populations in our oceans, and is determined to end the destructive practice of shark finning, as well as the overfishing of threatened shark populations. We are not alone: over the past few years, concern about this wasteful practice has spread. Shark finning bans have been enacted in a number of countries and the European Union, and the practice has been made illegal in U.S. waters. Also more than ten U.S. states and territories have passed laws banning the possession, sale and trade of shark fins.

This is no small deal. Grub Hub features menus of more than 35,000 restaurants in over 900 U.S. cities. All of those restaurants are now prohibited from selling shark fin products through Grubhub.

Though the shark finning business is on the decline in the U.S. as more people become aware of the problem, as many as 73 million sharks are still killed each year to satisfy the international shark fin demand. This demand comes at a cost, and not just to those individual helpless animals—sharks are apex predators, which are important to ocean ecosystems. Without them those ecosystems could collapse.

The North Carolina scallop fishery provides a striking example of this: As shark populations off North Carolina dwindled, cownose rays no longer had a predator, so their numbers increased.  The larger population of rays then consumed many more bay scallops than they had previously. This predation led to a collapse of the scallop fishery, hurting fishermen’s livelihoods. The loss of scallops, a filtering bivalve species, also led to degraded water quality which has implications for other species, as well. Here, declining shark populations spawned a destructive ripple effect. Clearly, sharks are more environmentally and economically valuable in our oceans than they are in soup.

Grubhub is doing its part to end shark finning and restoring shark populations in our oceans. But despite victories like these, sharks are still in serious trouble.

Sharks are vulnerable to extinction because of low reproductive rates and slow growth. Since they have difficulty replenishing their populations, almost all of the more than 400 shark species in the world’s oceans are in trouble. Last year, the International Union for Conservation of Nature (IUCN) found that a quarter of all shark and ray species are threatened with extinction. Even in the U.S., where shark finning is illegal, sharks are far from safe. A 2012 study by Stony Brook University evaluated the DNA of sharks served in shark fin soup in 14 U.S. cities. The researchers discovered that consumers could unknowingly be consuming the fins of species that are considered to be at-risk, including the globally endangered scalloped hammerhead.

Thanks to Grubhub, shark fins will no longer be available to consumers who order online from many restaurants in the U.S. But the fight to protect sharks is not over. We must continue to speak out against shark finning, and work to end this senseless practice.

Want to support Oceana’s ongoing campaigns to protect sharks and restore our oceans? Click here to make a donation today.