A History of Hooligan: An Iconic and Threatened Fish

Eulachon [yoo-luh-kon] is the official name for a fish that also goes by many others – smelt, ooligan or hooligan, and candlefish, to name a few – and has played a large role in the diets, culture and commerce of the people of the Pacific Northwest since long before Lewis and Clark first arrived. And they are increasingly threatened, which is why they need your help.

But first, let me give you a little background on this iconic fish. In 1806, Meriwether Lewis not only referenced and sketched this small fish in his journal, but went on to praise its deliciousness: “They are so fat they require no additional sauce, and I think them superior to any fish I ever tasted, even more delicate and luscious than the white fish of the lakes which have heretofore formed my standard of excellence among the fishes.”

The scientific name for eulachon, Thaleichthys pacificus, means roughly “oily fish of the Pacific,” and it is indeed their oily nature which has made them so famous. Eulachon oil was such an important trade item for tribes that the trade routes became known as “grease trails”. The name “candlefish” also stems from this quality – if dried and strung on a wick, the fish can actually be burned as a candle.

Eulachon spend most of their lives in the open ocean. For a short time each spring they migrate up freshwater rivers to spawn, formerly in vast numbers. This was when the fun would begin – when the fish were at their fattest, they would gather at the shallow mouths of their spawning streams, and residents would catch huge numbers of them with traps, rakes, or most commonly dip nets. Yearly festivals were held to celebrate the abundant runs, which were such a big event in Kelso, Washington, that the town earned the title “Smelt capital of the world!” 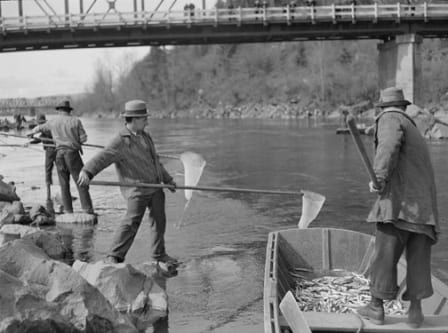 Unfortunately, the formerly abundant runs have been declining drastically in the past decades, and the fish have now reached such low numbers that all commercial and recreational fisheries for the species had to be closed last year in Oregon and Washington.

Their decline is due to several factors including climate change impacts and large amounts of bycatch in the pink shrimp trawl fishery.

In March 2010, in response to a petition from the Cowlitz Tribe, the government listed the southern distinct population of Pacific eulachon as a threatened species under the Endangered Species Act.

NOAA Fisheries is now proposing to designate 292 miles of estuary and river habitat as “critical habitat” for the southern population of Pacific eulachon within the states of California, Oregon, and Washington. This is an important first step for protecting eulachon, but it is not enough. They also need protection for their ocean habitat, where they spend 98% of their lives, and where the factors causing their decline have the biggest effect.

Eulachon play a critical role as prey in the marine food web. Whales, dolphins, seals, and seabirds are just a few of the many predators that will suffer without healthy eulachon populations. Many recreationally and commercially important fish such as salmon, halibut and cod also feed on eulachon. Forage fish, like eulachon, are highly susceptible to climate change and impacts from fisheries; the decline of the Pacific eulachon demonstrates this and shows why we need comprehensive forage fish protections.

So what can you do to help?

NOAA Fisheries is accepting comments on the proposed critical habitat designation until March 7. Please take a moment to tell them why protecting eulachon habitat is so important, and encourage them to expand the designation to include open ocean habitat. It will only take a few minutes to help protect a small fish with a big impact!