There’s no denying that sea otters rank right alongside baby sea turtles and tiny clownfish as some of the cutest ocean inhabitants. Fortunately, these creatures receive an entire week each September to be celebrated through Sea Otter Awareness Week – a time for scientists, conservationists, and the general public to celebrate these adorable marine mammals and learn more about their key roles in marine environments.

Sea otters are found in Pacific waters off the coast of North America and Asia, though primarily around the Alaskan coastline. Commercial hunting for their thick fur drove them to near extinction through the early 1900s, though they’ve rebounded to about 100,000 to 150,000 individuals today, according to National Geographic. Sea otters are now listed as threatened under the Endangered Species Act and as endangered under the IUCN Red List of Threatened Species. Though sea otters are recovering, it’s been a slow comeback: The southern population has only grown by about 5 percent over the last two years, where the numbers might rise by less than ten otters in any given year.

Other than being terribly cute, why should we care about these marine mammals? Sea otters are a keystone species, and also act as good indicators of ocean health. They keep kelp ecosystems healthy by preying on species that would otherwise ravage kelp forests, which are important feeding and breeding grounds for many species.

Take a look below for some seriously adorable pictures and facts on sea otters, and click here to learn more about sea otters on Oceana’s Marine Encyclopedia.

1. Sea otters have the thickest fur out of any marine mammal—850,000 to one million hairs per square inch!

2. Sea otters are skilled eaters: They use rocks, shells, and other tools to crush prey, which is often shellfish but also includes sea urchins and fish, while balancing the prey on their stomachs as they float on their backs. 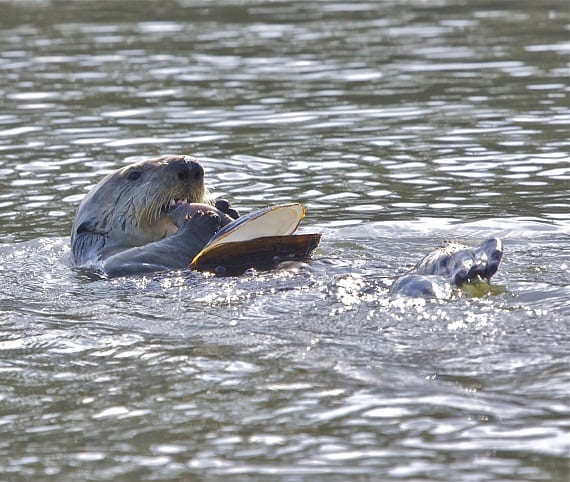 3. Adult sea otters can eat roughly 25 to 30 percent of their body weight in one day.

4. Sea otters are the smallest marine mammal, but the largest member of the weasel family.

5. Sea otters do not have insulating fat, so all of that densely packed hair keeps their skin dry—a crucial adaptation since they live in cold environments and spend most of their lives in water.

6. To keep their skin warm and dry, sea otters spend about 15 percent of their days grooming themselves to remove dirt and debris from their fur.

7. Sea otters often sleep together in large groups called rafts so that they don’t float away from each other, and sometimes link their paws together.

8. They can close their ears and nostrils when underwater.

9. Sea otters have flaps of skin under each front leg that double as pockets to store prey when diving for food.

10. Sea otters are the only otter species that give birth in water. 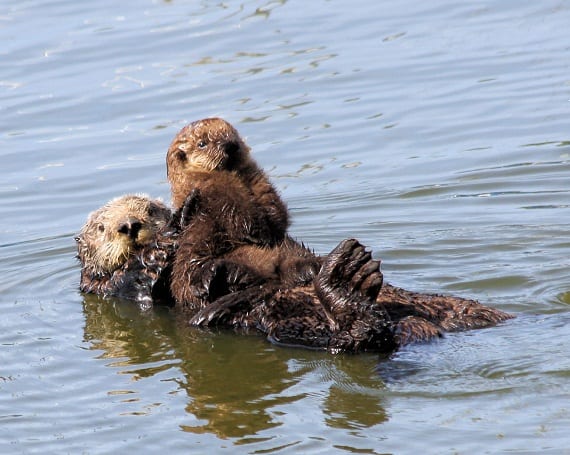