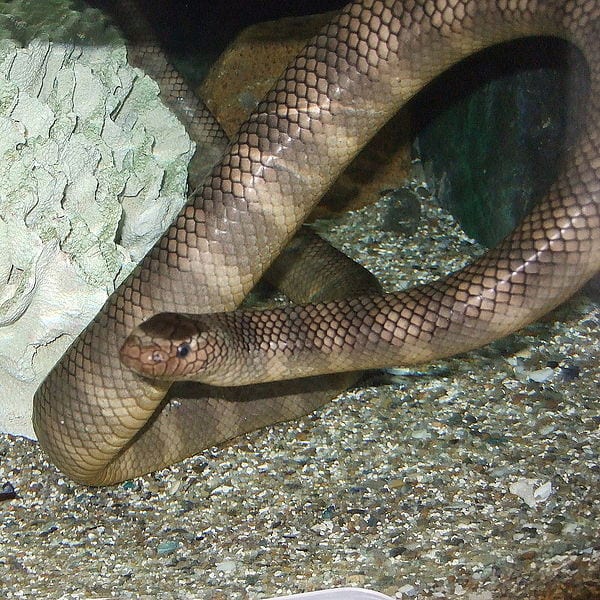 Most sea snakes are members of the family Hydrophiidae and are characterized by vertically flattened tails and nostrils with valvelike flaps. Unlike eels, sea snakes have scales but lack gills or fins. While they spend much of their time underwater, they must surface periodically to breathe.

Sea snakes are found often in protected coastal waters and near river mouths.  However, they also thrive in other habitats, ranging from muddy or turbid water to clear waters and coral reefs.

The yellow-bellied sea snake or pelagic sea snake, Pelamis platurus, has a remarkably wide geographic range, which reaches the western coasts of North and South America from the Baja peninsula to Ecuador.

Sea snakes are not found in the Atlantic Ocean, the Caribbean, or along the North American coast north of Baja. Hawaii is the only U.S. state where sea snakes are found. Only one, however, has ever been reported in Hawaiian waters, the aforementioned Pelamis platurus, which is the only open-ocean marine snake. While its range extends to these waters, it’s very rarely ever encountered, with only 20 specimens documented.

While they may be feared by the populace at large, generally, sea snakes are not aggressive, and they are not thought to strike humans unless provoked, nor do they typically actively pursue swimming prey.

Five major groups of sea snakes exist. The hydrophiids, or “true” sea snakes, numbering around 54 species, are the largest group of sea snakes, having evolved from Australian terrestrial elapids, closely related to cobras, which returned to the marine environment around 30 million years ago.

The laticaudids, or sea kraits, comprise five species, of which four are marine species.  They are banded and sometimes seen in large numbers on beaches in Southeast Asia and some Pacific Islands. Sea kraits have also evolved from terrestrial elapids and have highly toxic venom. However they are very placid and unlikely to bite unless provoked.  They are the only group of sea snakes that are oviparous (egg laying) and must return to land to breed.

The acrochordids, or file snakes, comprise three species. One species is fully marine while the others live in estuaries and freshwater habitats (file snakes are not venomous).

The homalopsids, or mangrove snakes, are colubrids that are confined almost entirely to estuarine environments. Nine species of aquatic homalopsids are found primarily in tropical Asian waters and northern Australian waters. Only three species are fully aquatic.

Finally the natricids, or salt marsh snakes, are confined almost entirely to salt marsh environments. The three species of marine natricids are confined to temperate and subtropical North America and are not venomous. It’s thought that these natricids might be in the early stages of evolving marine adaptations.

All sea snakes except the sea kraits (latidcaudids) give birth to live young after gestation periods that range from four to 11 months, depending on the species. The timing of the reproductive cycle varies enormously between species and also differs between geographical locations for the same species.

These oft-maligned marine animals are incredibly successful predators occupying a unique niche in coastal tropical seas of the Pacific.  As there bodies gracefully undulate, propelling them through the seas like a gymnast’s ribbon, many species face a number of threats in the form of degraded and destroyed habitats, warming seas, changing ecosystem structure, and industrial fishing.