Last week, a United States federal judge ruled that BP’s reckless and negligent behavior is at fault for the 2010 Deepwater Horizon oil spill, which killed 11 people and caused 200 million gallons of oil to flood into the Gulf of Mexico. Today’s ruling opens up BP to billions of dollars in possible civil penalty fines, including a possible $18 billion under the Clean Water Act. Clean Water Act civil penalties can amount to $1,100 per barrel spilled in the absence of “gross negligence or willful misconduct,” according to court documents.

The BP oil spill caused a range of ecological and environmental impacts on the Gulf of Mexico, many of which are just becoming understood. A study found that oil from the spill caused serious defects in the hearts of tuna embryos and larvae when exposed in a laboratory, while another study found that dispersants from the spill lingered in deep sea corals and on beaches for quite some time after the spill. Many fishermen’s catches have still not recovered more than four years later.

One fisherman, George Barisich, who is also the president of the United Commercial Fisherman’s Association, has not seen fishery production recover. Barisich gave Oceana a look at the staggering impact of the 2010 spill on his company’s catch: 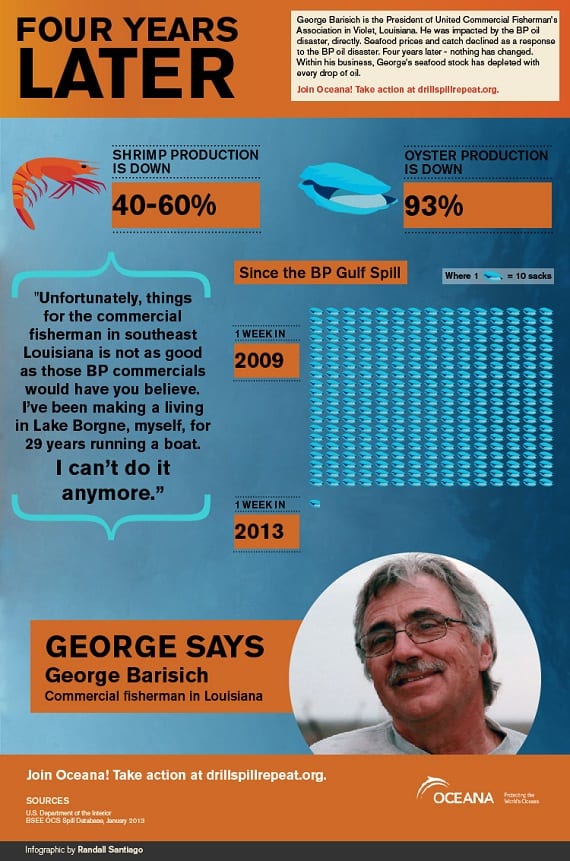 Today’s court finding that BP’s negligent behavior is at fault for the Deepwater Horizon oil disaster is recognition of what anyone paying attention already knew: BP’s negligence caused the worst environmental disaster in U.S. history, and the company needs to be held accountable.

BP’s many fatal errors and corner-cutting mistakes could be a textbook example of negligence. The fines levied against BP must reflect the scale of unprecedented and far-reaching damage to human life, marine life and coastal economies that the spill caused. The $18 billion estimate for Clean Water Act fines is just part of the full price BP should be required to pay. According to our own estimates, BP owes Americans much more, possibly even an additional $30 billion when we consider the natural resource damages, as well as other civil penalties.

The science around the true, long-term environmental impacts resulting from the spill continues to build. One study links multiple dolphin deaths to the oil spill. Another from NOAA suggests the exposure to oil can harm tuna hearts in a number of different species. In addition, commercial fisherman and oysterman report reduced catch rates in areas they had previously fished for decades.

The Obama administration recently announced that it would open up the Atlantic to the dangerous process of seismic airgun blasting to search for oil and gas deposits deep beneath the ocean floor. These steps take us in the wrong direction and many coastal residents are outraged. In fact, 20 coastal towns along the East Coast have already passed resolutions, and more than 200 local, state and federal elected officials have expressed opposition. But the government has refused to stop taking these dangerous steps towards the next oil spill.

We hope this decision serves as a wake-up call to those who are pushing for seismic testing to remind them that offshore drilling is high risk. It leads to environmental disasters that can overshadow any financial benefits in the blink of an eye. In every ocean where we have drilled, we have spilled, and unless we change course, we are likely to repeat that.

The federal judge’s ruling has received extensive media coverage over the past few days. To learn more about the judge’s decision and the recent history surrounding the spill, check out a few of these stories below:

“BP Lashes Out at Journalists and ‘Opportunistic’ Environmentalists” — Mother Jones