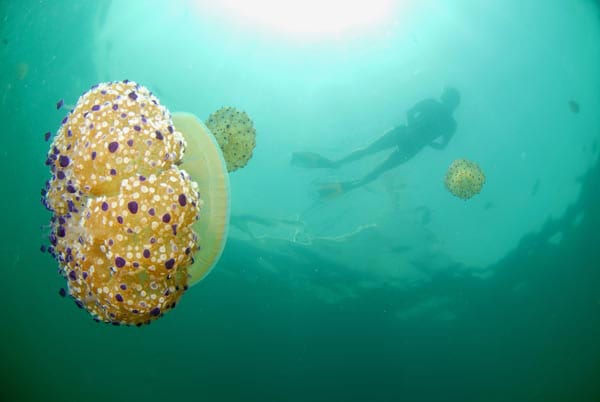 Last night, we laid anchor outside of the Mar Menor (Minor Sea) and this morning, we passed through a drawbridge and into this unusual world unto itself. In the weightless air of early morning, we moved ahead into emerald waters and thousands, actually more like MILLIONS of jellyfish.

We lined up along the front railing and my jaw dropped as jellies began to float by in groups of five, ten, thirty at a time in a continuous flow past both sides of the pontoon. Amazing, and in numbers beyond the imagination. Ricardo counted 2,774 passing between the pontoons of the catamaran in order to try and estimate how many there might be.

These jellies were unlike any I’ve seen before. Words are probably insufficient but to give an idea they are as spectacular as tutus of professional ballerinas, extravagant Easter bonnets or works of modern art in blown glass. The ones known as “fried eggs”  (Cotylorhiza tuberculata) have a bell with soft edges the color of peaches. Beneath this cap, they reach out with four “arms” that are used to capture food. And the entire animal is surrounded by a mantle of brilliant jewels in shades of purple and white. When you approach them underwater, they pulse habitually and unconsciously, circulating nutrients through their body and maintaining their position in the water column.

Today I had the beautiful opportunity to dive with the Ranger’s official photographers and expert divers — Juan, Thierry, Pilar and Jorge. We entered the water with a giant stride at the foot of the catamaran, to land in a great tide of non-stinging jellies. We spent an hour and a half observing them from above and below, from every possible angle. It’s easy to get caught up in watching the swaying tentacles, small and large groups of jellies turning in the light as it passes through the water.

How very cool to be able to dive on board the Oceana catamaran. At the same time, how amazing the amount of work to make it possible. Each day, the crew and Riki make plans on where we can find marine life, document human impacts and get into the water in a safe and straightforward way. On arrival, the next step is to look for an appropriate site with enough density of flora and fauna of species that we are interested in.

The divemaster stores all of the dive gear in the bow, conducting maintenance and repairs in a very small space. Between dives, the tanks are refilled with air one by one using a generator on deck. Before and after every dive, the photographers have to care for, clean and dry the video, still cameras and the custom waterproof cases used to carry their equipment underwater.

Did I mention yet how much fun it was to dive from the Ranger? On entering the water, you can look back at a distorted version of the boat — the masts, pontoons, the Oceana logo. Below the jellies in this shallow sea, you land in a seascape full of marine plants native to this area, a carpet of short curly leaves (Caulerpa prolifera) with long strands of linguini reaching up in between. Colonial sea squirts and other animals grow on top of the leaves and fish hide underneath.

Before lunch, we left behind the scuba equipment and Juan and I returned to the warm water to free dive. We saw more jellies including the second species that was less common though just as impressive in its beauty and its extraterrestrial nature. The pearl-colored bell with a scalloped purple edge of Rhizostoma pulmo opens and shuts around complicated arms shaped like cauliflower or brains. The oceanographer we hosted on board mentioned the its latin name pulmo refers to its appearance reminiscent of a human lung.