On May 19, 2018, thousands of Americans across the country participated in Hands Across the Sand, a display of unity against dirty and dangerous offshore drilling. One-hundred and seventeen Hands Across the Sand events took place in 18 states and seven countries. For 15 minutes, all around the world, attendees held hands along the water in solidarity against offshore drilling and seismic airgun blasting, drawing a symbolic line of protection in the sand for the oceans they love.

Saturday’s events demonstrated the powerful, diverse, and growing opposition to offshore drilling and exploration. In denouncing the administration’s continued efforts to expand oil and gas drilling and exploration, Hands Across the Sand participants joined communities, business leaders and elected officials from across the country. As of today, opposition and concern over offshore drilling activities includes:

It’s time for the Trump administration to listen to coastal residents – the people with the most to lose — and reverse its plan to drill for oil in our waters at any cost.

Check out our highlights from Oceana’s Hands Across the Sand events: 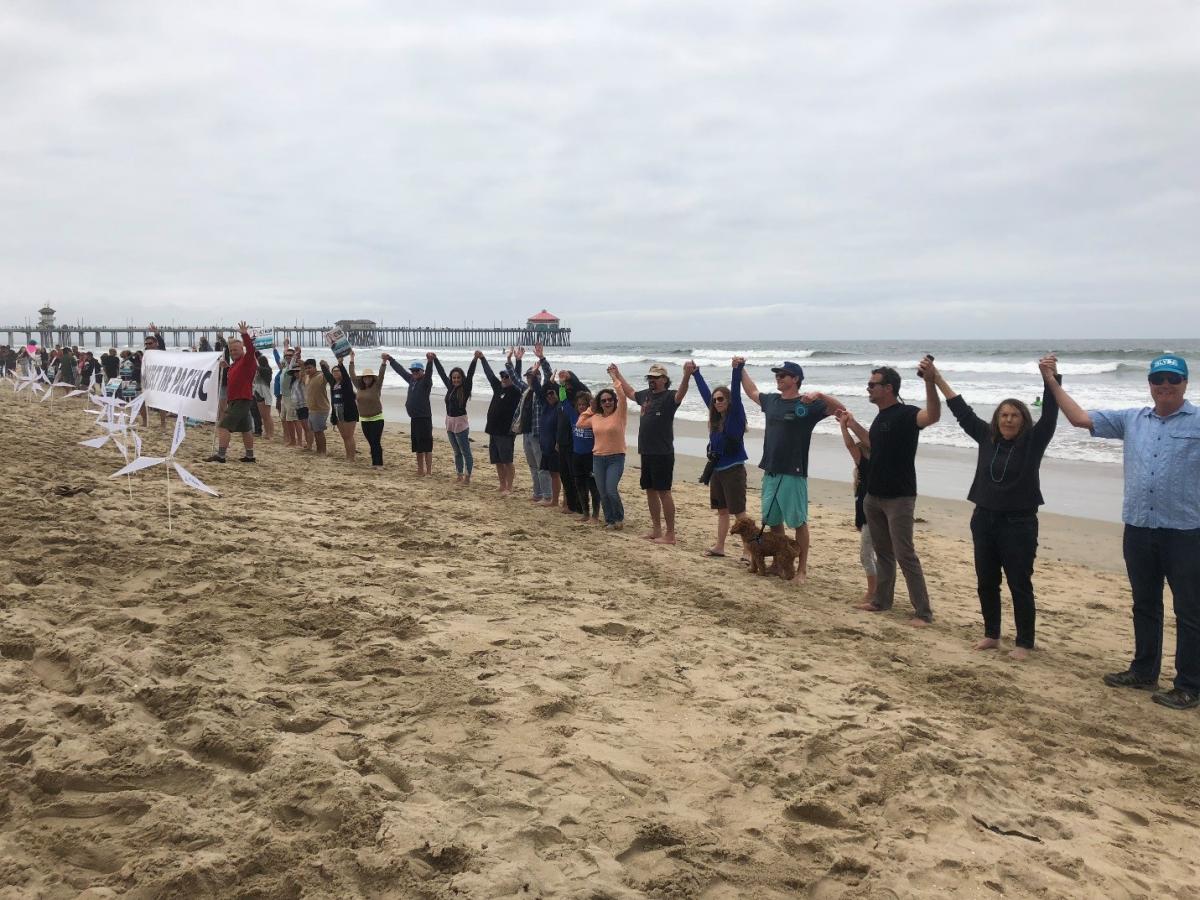 A large sign read “PROTECT THE PACIFIC” at the Huntington Beach, California demonstration. In addition, Oceana joined events at Moonlight Beach in Encinitas and Mission Beach in San Diego. Californians – including those with wagging tails and four legs – lined the beach and made it clear that dirty and dangerous offshore drilling has no place off the coast of The Golden State. 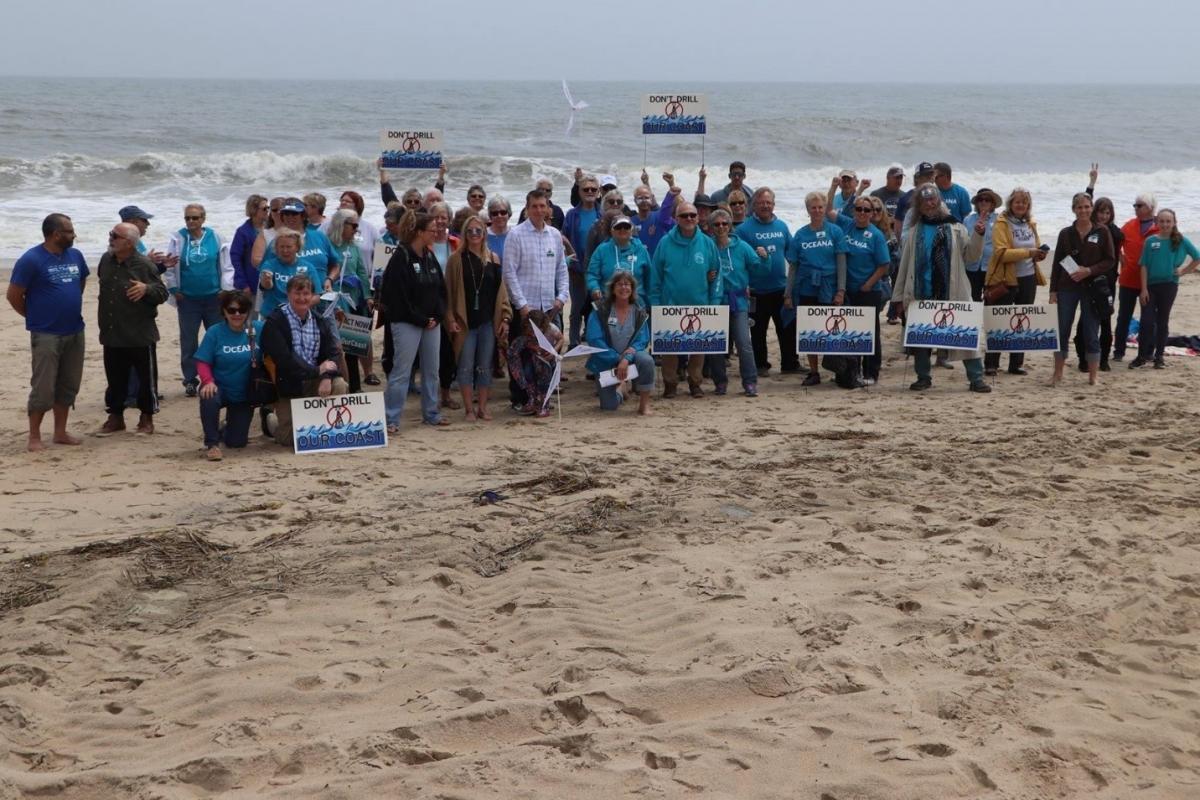 Clad in ocean blue, over 100 coastal business leaders, community members and activists toughed out the rain in Rehoboth Beach, Delaware. Drilling and exploration for oil and gas off the coast of Delaware risk over 25,000 jobs and about $1.2 billion in GDP for only eight days’-worth of oil and seven days’-worth of gas. 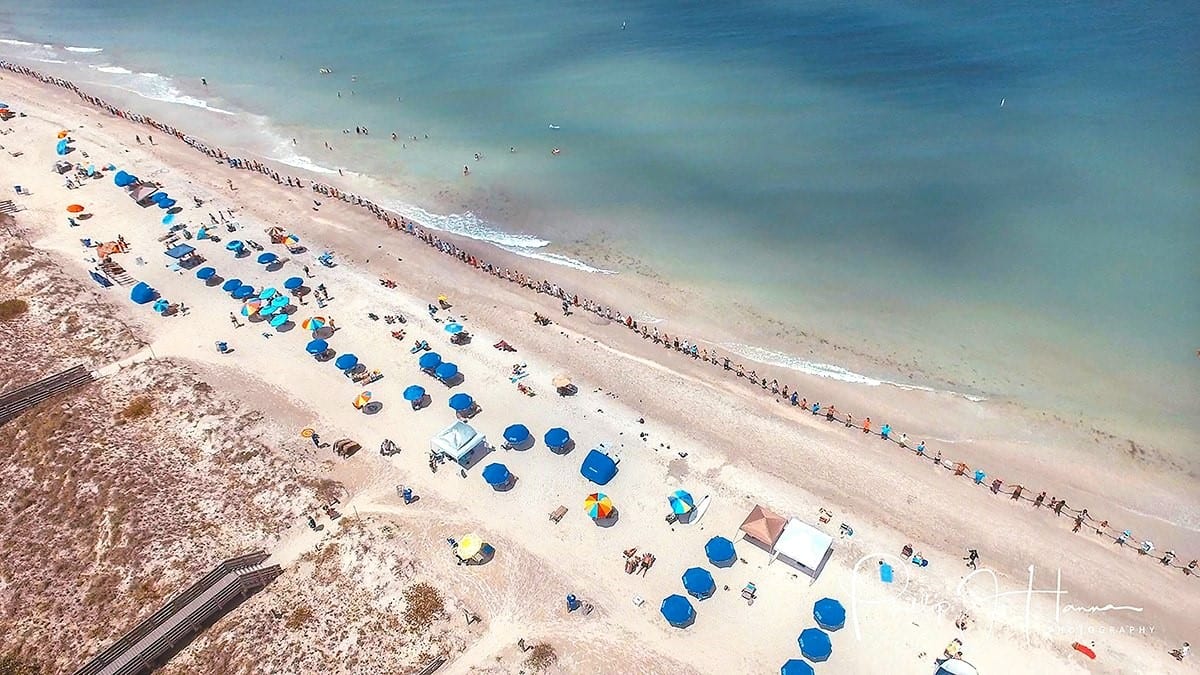 Yes, that’s a line of people! Hundreds flocked to the Indian Rocks Beach shores in Florida on Saturday to join hands in opposition to dirty and dangerous offshore drilling. Floridians have made it clear that opening the eastern Gulf to seismic airgun blasting and offshore drilling would be shortsighted and wrong. Florida’s fishing, tourism and recreation industries on the Gulf coast support 304,556 jobs and generate $17.5 billion in GDP. In contrast, by 2020 the economic impacts of the BP Deepwater Horizon disaster on commercial and recreational fisheries will be about $8.4 billion in economic losses. 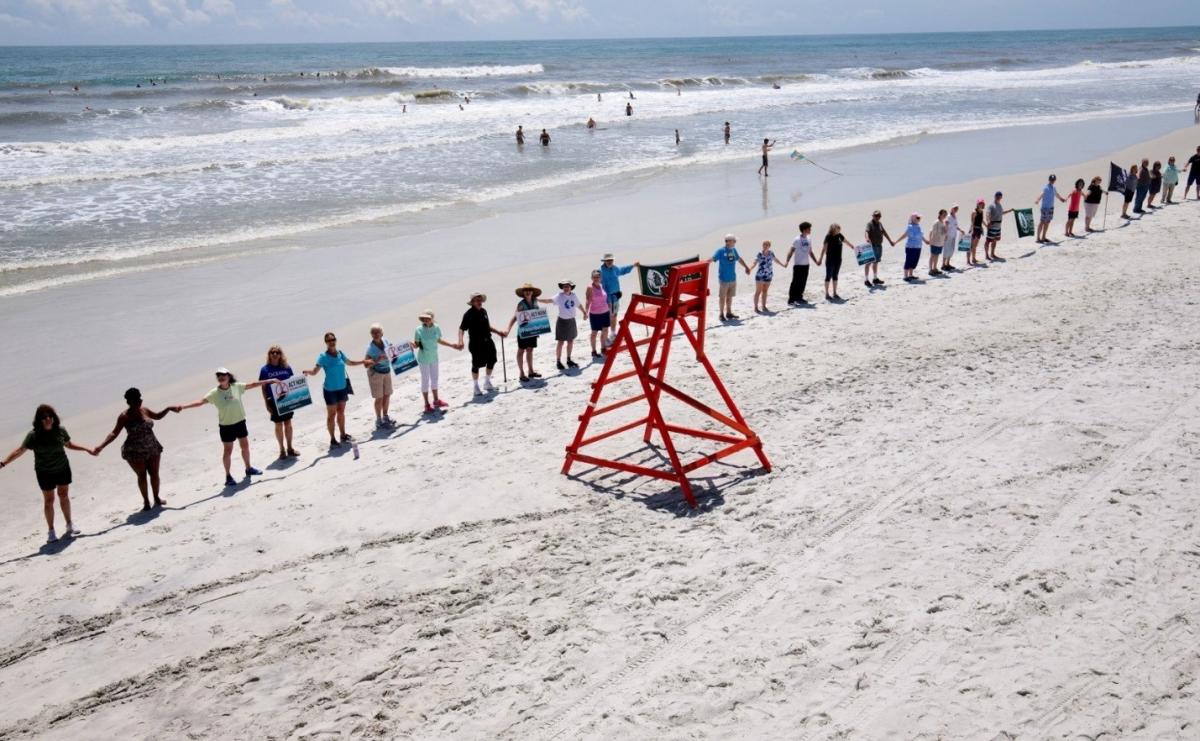 The skies cleared and the sun came out to shine on Saturday morning in Jacksonville Beach, Florida, just in time for coastal residents to stand hand-in-hand against proposed offshore oil exploration in the Atlantic Ocean. Sixty-five coastal municipalities in Florida have passed formal resolutions against new offshore drilling and seismic airgun blasting. 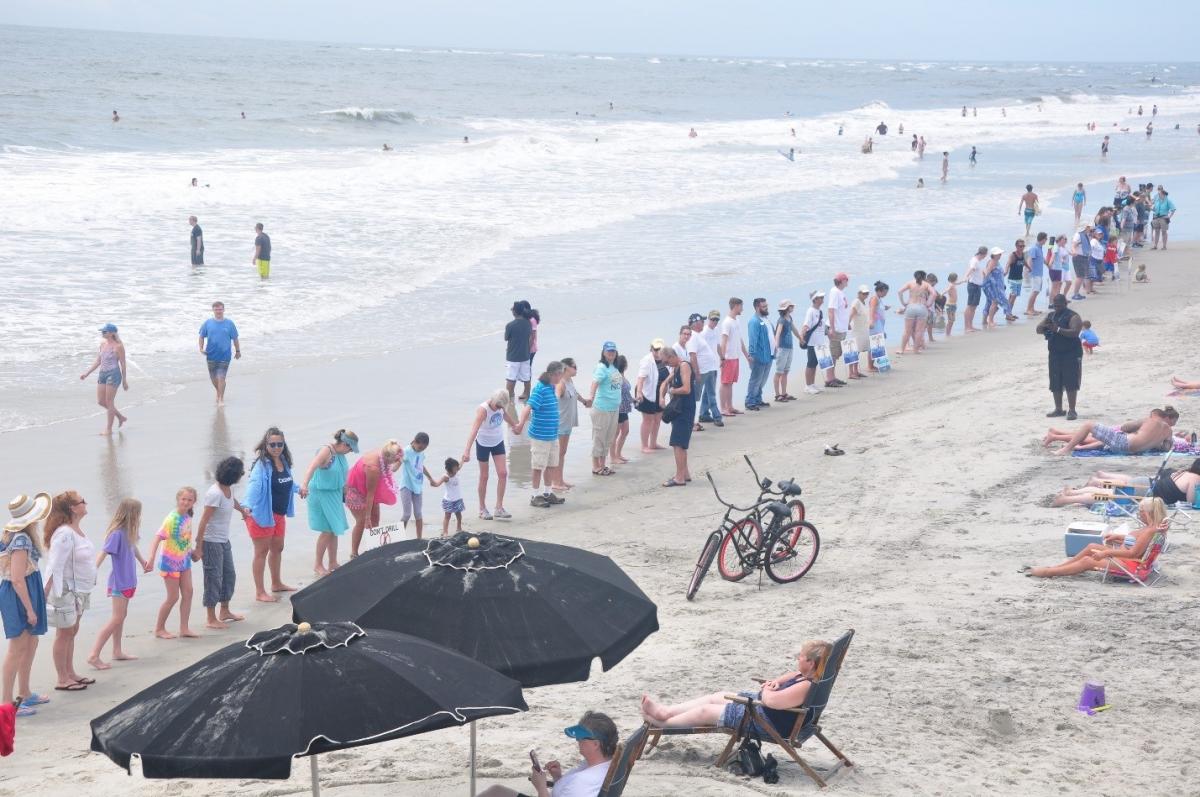 Nearly 80 people joined hands on Georgia’s Tybee Island oceanfront at noon on Saturday. Many locals – especially the youth in attendance – were energized by the turnout and voiced their excitement to continue the fight against dirty and dangerous offshore oil exploration. Oceana’s Clean Coast Economy report showed that offshore drilling activities risk more than 23,000 jobs and about $1.3 billion in GDP in Georgia for only one day’s-worth of oil and one day’s-worth of gas. 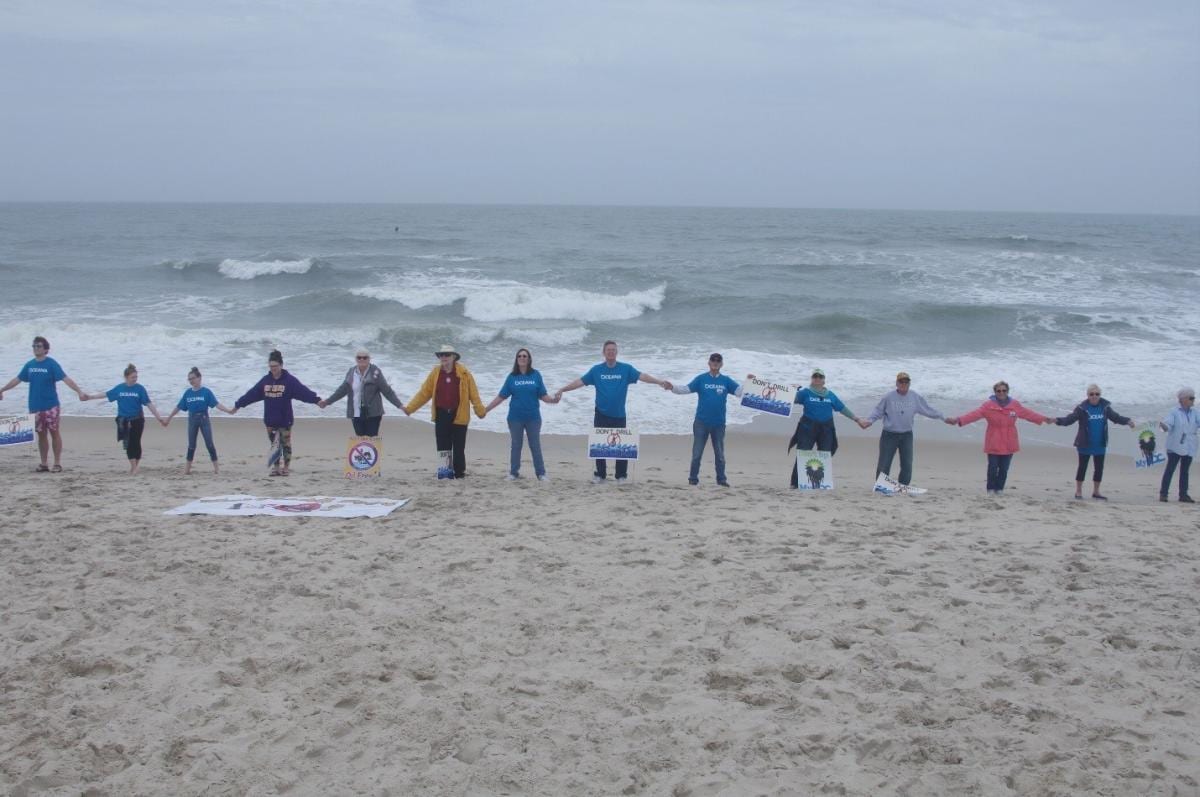 Ocean lovers joined hands on Maryland’s Assateague Island on Saturday. Despite rainy conditions, nearly 100 coastal Marylanders – some came all the way from Baltimore – stood together in opposition to dirty and dangerous offshore drilling. 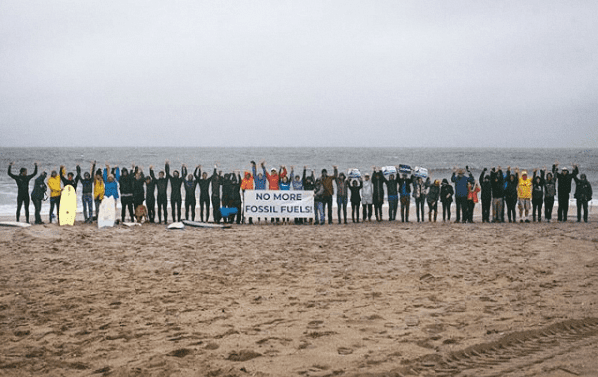 Weather was no match for these New York ocean champions! The Rockaways saw dozens of activists bundle up and stand against offshore drilling. The beach event was followed by an indoor rally and press conference where local advocates shared their thoughts on protecting their coasts from the threats of offshore drilling and seismic airgun blasting. 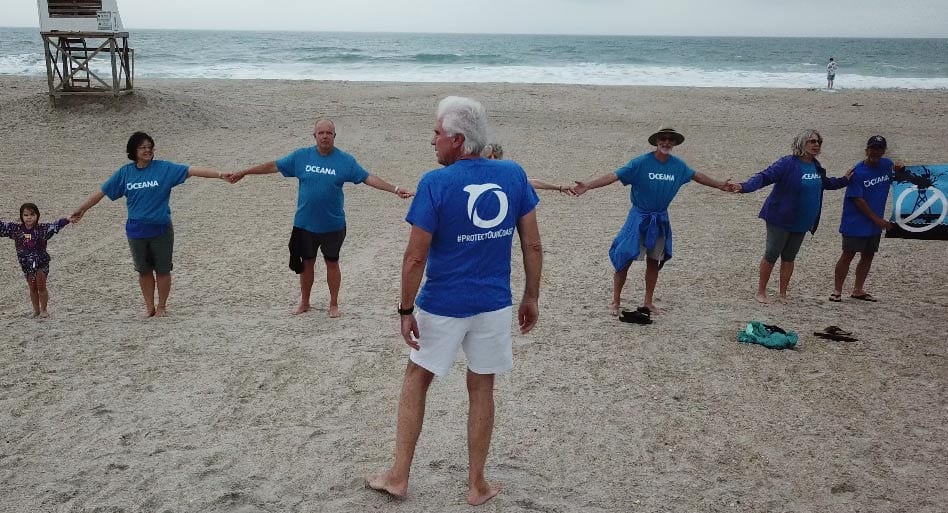 North Carolinians gathered in the sand at 13 different locations on Saturday, including Wrightsville Beach. Oil-soaked animals and oil-slicked beaches have no home on the Carolina shores. 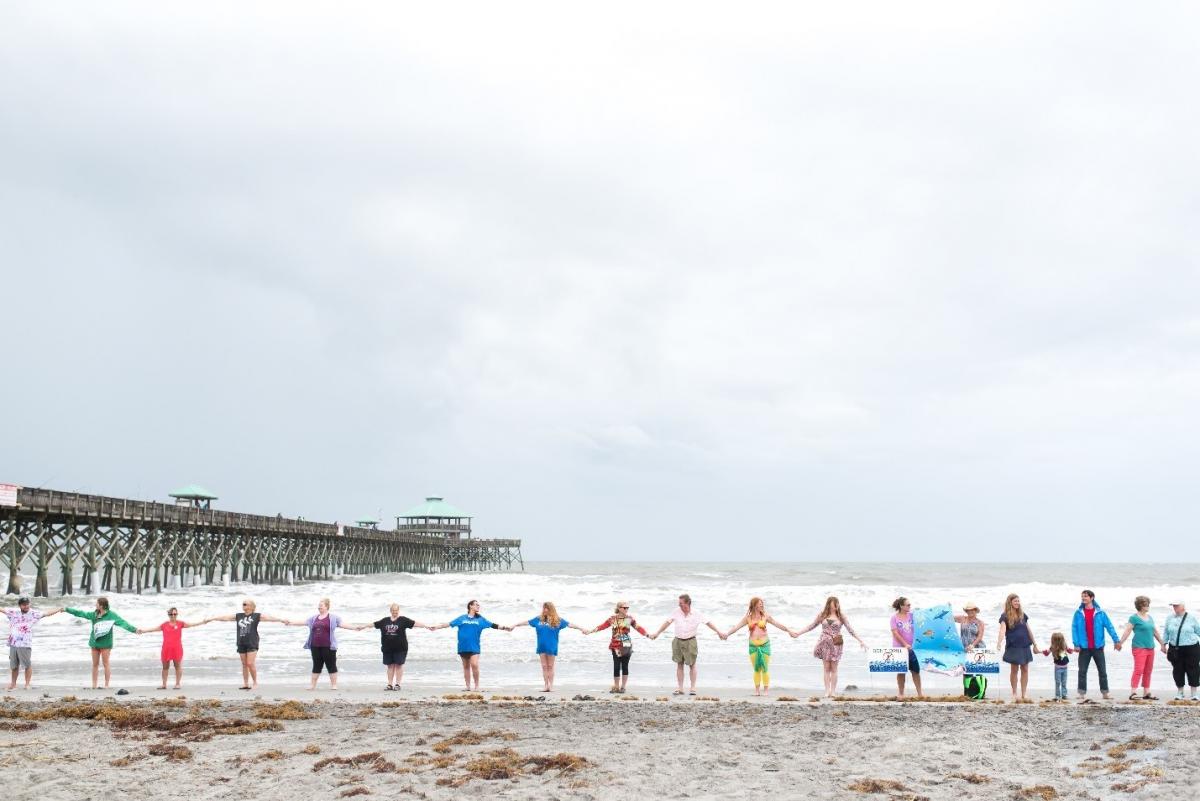 Seventy-five people lined the sand of South Carolina’s Folly Beach during Hands Across the Sand on Saturday. Activists of all ages stood in front of the choppy waves and made clear that South Carolina’s coastal way of life is too precious to be threatened by reckless offshore drilling exploration in the Atlantic. 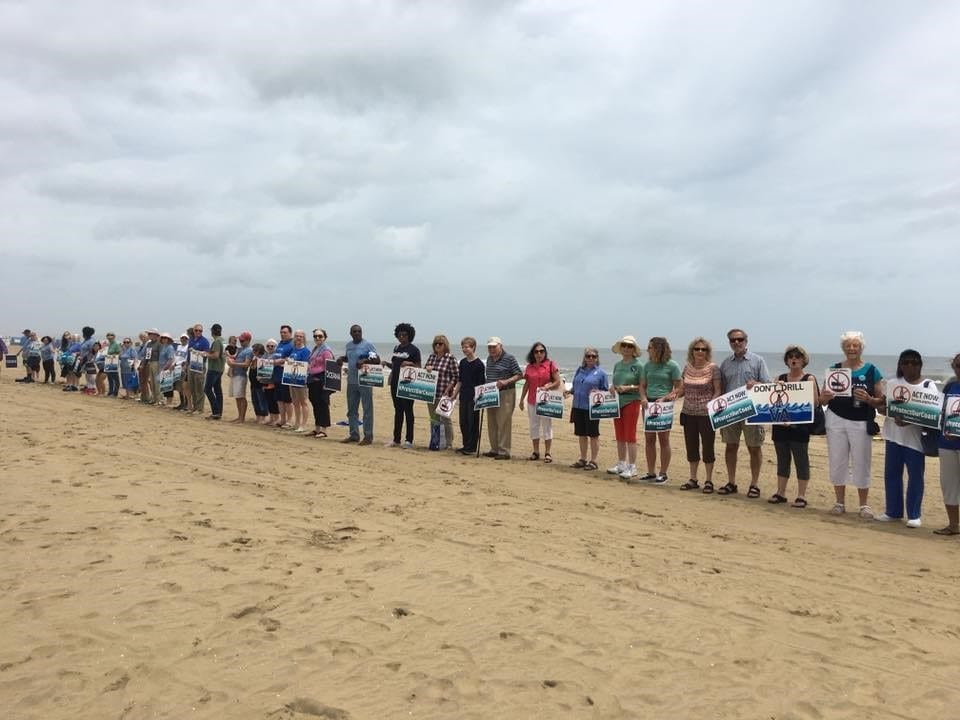 Saturday’s cloudy skies didn’t turn away concerned Virginians. About 300 people gathered in Virginia Beach to send a strong message to decision makers in Washington: listen to coastal communities, those who would be most impacted by offshore drilling and seismic airgun blasting, and protect our coast!