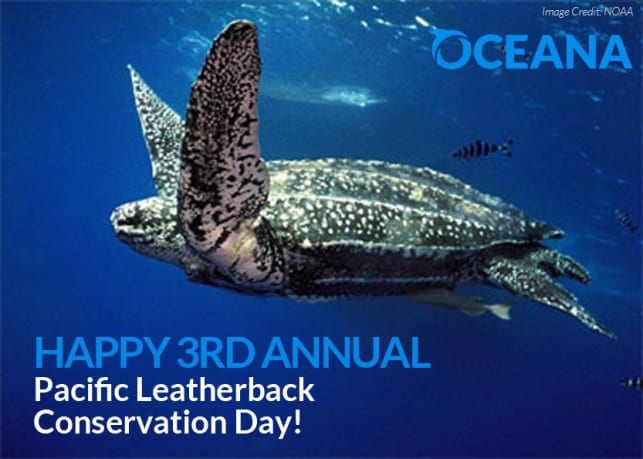 Join Oceana in celebrating California’s third annual Pacific Leatherback Sea Turtle Conservation Day, an entire day designated to celebrating the ocean’s living dinosaur. Today’s festivities are not limited to only California residents. We encourage everyone around the world to take a moment to learn and share with your friends, family, and co-workers a few fun facts that make Pacific leatherback sea turtles the coolest living dinosaur on the planet.

The endangered Pacific leatherback sea turtle swam onto California’s official list of state symbols three years ago when Governor Brown signed a bill (AB 1776) into law designating this largest sea turtle as California’s state marine reptile. The bill, introduced by former Assemblymember Paul Fong and co-sponsored by Oceana, promotes a fun way to learn about and appreciate the leatherback, while engraining the ecological importance of this ancient species into state law. The bill established every October 15 as California’s annual Pacific Leatherback Sea Turtle Conservation Day and encourages California public schools to include leatherback sea turtles into curriculum when possible while asking the state to support efforts to recover and preserve the leatherback.

Endangered Pacific leatherback sea turtles used to roam the earth with the dinosaurs, having survived for 100 million years virtually unchanged. Now, they swim throughout the Pacific Ocean among humpbacks whales, bottlenose dolphins, sea lions, and a plethora of awe-inspiring wildlife species—one of many reasons the Pacific Ocean is such an amazing place.

Pacific leatherbacks are truly an intriguing species. Hatched on beaches in Papua, Indonesia, full-grown leatherbacks make an impressive migration from these nesting beaches to California waters to feed on jellyfish—a 12,000 mile, round-trip journey! Brown sea nettle jellyfish are an absolute favorite food of the leatherback, but they will also settle for moon jellies and other gelatinous marine life as well. Adult female leatherbacks return to the same beaches on which they were born to lay eggs. They tediously dig a nest into the sand where they lay approximately 100 eggs, then carefully cover their unhatched offspring with sand. When the hatchlings are born, they break free of their egg shells and scurry to swim into the water before being swept up by hungry seabirds. Hatchings weigh less than 2 ounces, lighter than a cell phone. Once an adult, they can grow to up to nine feet long and weigh up to 2,000 pounds—as big as a Mini Cooper car! 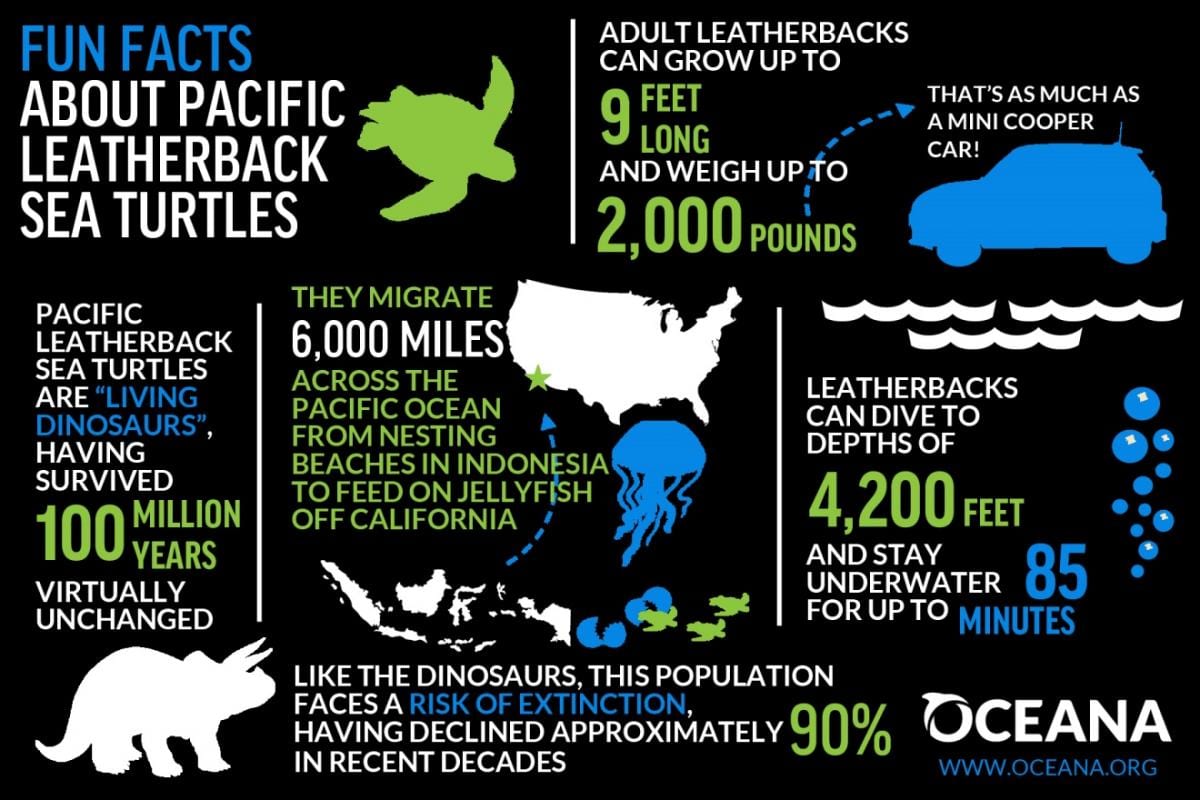 You can learn even more about Pacific leatherbacks by downloading this activity book.

Pacific leatherback populations face serious risk of extinction having declined by approximately 90 percent in recent decades. Sadly, these navigation specialists encounter a gauntlet of threats as they make their journey across the Pacific such as poaching, ingestion of plastic bags— which they mistake for jellyfish— and entanglement and drowning in gillnet fishing gear and longlines used to target swordfish, sharks and tuna off the coast of California and on the high seas (waters outside 200 nautical miles).

Oceana is dedicated to the recovery of the Pacific leatherback. Over the years we have made many strides in providing further protections to ensure safe passage for these turtles as they swim offshore the U.S. West Coast in search of food.

In March 2014, Oceana successfully thwarted efforts to expand the use of destructive swordfish drift gillnets into the Pacific Leatherback Conservation Area off California and Oregon. These nets are a serious threat to Pacific leatherbacks as they ensnare many species of wildlife that swim in their path.

In November 2013, Oceana convened a new international partnership with Indonesia to save endangered Pacific leatherback sea turtles. Scientists and government leaders from California and Tambrauw Indonesia convened for three days to determine how to best share information and resources to address threats both on nesting beaches and in the ocean in an effort to increase chances for survival of Pacific leatherbacks.

In January 2012, Oceana helped secure 41,914 square miles of ocean habitat as critical habitat off the shores of Washington, Oregon and California for the endangered Pacific leatherback sea turtle.

There is still more we must do to help protect leatherbacks while they are off the U.S. West Coast. Federal fishery managers are considering proposals that will allow West Coast fishermen to start fishing with pelagic longlines inside the West Coast EEZ (3-200 nautical miles offshore) and on the “high seas” (waters outside 200 nautical miles). Pelagic longlines are fishing lines that can stretch for up to 62 miles in length and contain thousands of baited hooks. In the quest for swordfish and tuna pelagic longlines ensnare sea turtles, false killer whales, dolphins, sharks, and sea birds—to name a few—which are discarded, many of them thrown overboard injured, dying, or already dead. Oceana defeated similar efforts over the past decade, and we are fighting to stave off this destructive fishing gear, which is currently banned due to bycatch concerns.

The National Marine Fisheries Service is also considering authorizing two swordfish drift gillnet fishing vessels to fish inside the Pacific Leatherback Conservation Area off California and Oregon under the guise of a “test” to see whether they can fish in that area with mile long nets and not kill leatherback sea turtles. This is a key conservation area that was designated in 2001 specifically to protect leatherbacks from drift gillnets while they migrate and feed off our shores. The protection provided by the Pacific Leatherback Conservation Area is now at risk from drift gillnet fishermen who want to get the nets back in that area.

You can help protect leatherback sea turtles from these threats by signing a petition to decision makers urging them to prevent both the introduction of pelagic longlines and expansion of swordfish drift gillnets.