A Life for Every Tentacle 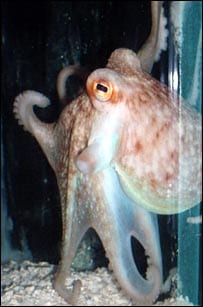 Osborne the octopus is anything but common. He narrowly avoided a potentially sticky situation after he was accidentally netted by a fisherman in frigid waters off the coast of Hampshire, England.

Ordinarily common octopuses can be found in much warmer Mediterranean waters. In fact, scientists at the Blue Reef Aquarium, where the octopus is recovering, are a bit perplexed as to how Osborne (aquarium staffers gave him the name) drifted so far from his natural habitat.

One thing’s for certain, though: Osborne is one lucky cephalopod. Then again, if cats can have nine lives … can octopuses have eight?