Just one year ago in early June 2010, tar balls began washing up on the beaches of Pensacola, Florida, and oily waves lapped the shores of the federally protected Gulf Islands National Seashore. Graphic images of oil-covered cormorants and pelicans emerged in the news.

Over one-third of federal waters in the Gulf of Mexico were closed to fishing and BP released the first video clips of a hole the size of a dinner plate gushing crude oil into the deep dark waters of the Gulf. But one year later a different disaster of great magnitude has occurred — the worst environmental disaster in U.S. history has largely been forgotten.

A phenomenon deemed “oil spill amnesia” has been uncovered after the U.S. House of Representatives voted to greatly expand offshore oil drilling in federal waters with less safety provisions than before the Deepwater Horizon disaster. This made it obvious that many of our politicians had forgotten about the risks of offshore drilling, but how much the general public and media has forgotten about the Gulf oil spill was speculative, until now.

Google has come out with a new tool that is perfect for data nerds called Google Correlate. It can relate two different search terms or phrases and show their correlation in terms of internet search activity. Based on search activity Google has been able to accurately predict rates of flu, and these tools may serve great importance in our society.

It has also revealed that people have indeed largely forgotten about the impacts of the BP oil spill.

I used Google Correlate to relate search activity for “BP oil spill” and “oil spill news” which showed a strong correlation of 0.96. The correlation isn’t as surprising as the levels of search activity in the time series graph which speaks for itself. Public interest in the spill peaked in the summer of 2010, but has significantly dropped off to near pre-spill levels just a year after the incident occurred. 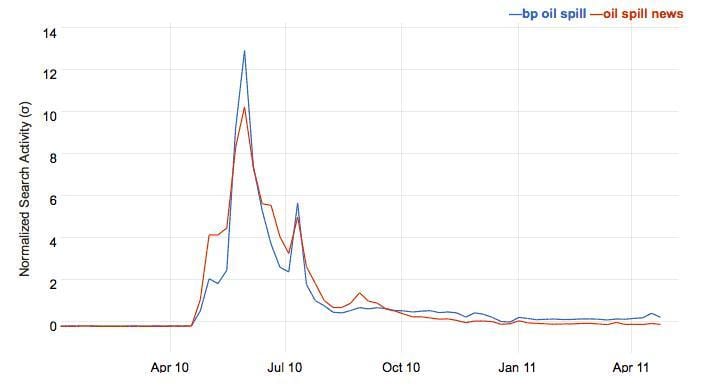 In fact, the media coverage and search activity started to dip before the well was even capped, demonstrating America’s short attention span. In 2011, BP put forth an expensive advertising campaign making false claims that the oil was cleaned up and the environmental impacts were over or benign.

The impacts of the spill are not over. And the Gulf of Mexico has not been restored. Tar balls still appear on beaches, Gulf residents are out of work or suffering from bizarre illnesses, the BP claims commission has helped few residents, scientists are investigating dozens of premature and baby dolphin carcasses washing ashore, red drum fish have lesions, plankton species show deformities, ancient deepwater corals are dying and the list goes on. But Congress has done nothing to make drilling safer, and even the media seems to have largely moved on.

Have we, as a society, turned our backs on these ongoing impacts?Do we agree with our elected representatives that we should drill more holes in the Gulf?

That’s doubtful. Most people recognize that drilling is not a real solution to our energy problems, and we need to respond to this disaster as we did to past oil spills, by paying attention. Media coverage and public pressure persisted for years after the 1969 Santa Barbara Spill influencing historic pieces of legislation like the Clean Water Act, the National Environmental Policy Act and the first Earth Day.

After the Exxon Valdez disaster, the media and public stayed deeply engaged and the incident led to the Oil Pollution Act which eliminated similar tankers from entering Prince William Sound, the site of the spill.

But after the Deepwater Horizon disaster (17 times the size of the Exxon Valdez), we have failed to raise the liability cap on oil spills, improve offshore drilling safety measures or do the appropriate thing and reinstate the moratorium that bars the expansion of offshore drilling.

It’s upsetting that people are ignoring the ongoing impacts of the Deepwater Horizon spill. But you can show that you remember by joining us on June 25, when thousands of individuals will gather on beaches, in parks, and on sidewalks all over the world and in your hometown to join hands in a demonstration against offshore drilling and to show support for clean energy.

WHAT: Hands Across the Sand

WHERE: Your hometown, Washington, D.C., Australia, Chile – all over the world