Seafood fraud is a pervasive and growing global issue. It includes any number of ways that seafood is misrepresented: low quality seafood sneakily substituted for higher-value fish, labels including inaccurate information to obscure seafood origin, and seafood’s true weight falsified with overbreading and overglazing. Cheap, low quality fish sold at a higher price and name can cheat consumers out of their hard-earned money, undercut honest, hardworking fishermen who play by the rules, and put our ocean ecosystems in jeopardy.

In a new report released today, Oceana reviewed more than 200 published studies covering 55 different countries, on every continent except Antarctica, in order to reveal the global scope of seafood fraud.  The report coincides with the release of an easy-to-use online map that allows users to explore cases of seafood fraud across the globe, updating Oceana’s 2014 literature review of seafood fraud.

One in 5 of the 25,000 samples of seafood tested worldwide were mislabeled, with this fraud occurring at every step of the seafood supply chain: retail, wholesale, distribution, import/export, packaging/processing and landing. The top three fish most commonly used as fraudulent substitutes were Asian catfish (pangasius), hake and escolar/oilfish.

All this fraud can have a major impact on your health, your wallet and conservation efforts at large. Examples of these impacts are numerous. In Chicago, toxic pufferfish was sold as monkfish, sending people to the hospital. Outbreaks of intestinal illness occurred in Spain, Australia, Canada and Hong Kong, caused by escolar masquerading as other fish. Consumers are ripped off by mislabeled Asian catfish, which was found to be substituted for 18 different species of higher value. River dolphin in Brazil are killed and used as bait for the “vulture catfish,” which consumers only buy if the fish is sold under a fraudulent name. Most shockingly, endangered sei whale meat was illegally sold in California after being intentionally mislabeled as “fatty tuna.”

These cases and more can be found by exploring the global seafood fraud map, which can be found at www.oceana.org/seafoodfraudmap.

The seafood fraud map has more than 400 points representing the general locations of studies and other cases that have observed seafood fraud, however, the actual retail or business locations where seafood mislabeling occurred are not depicted in the map. These points are symbolized on the map by colored fish icons which depict the level of seafood mislabeling. For studies conducted in multiple locations, a fish icon is placed on each sampling area included in the study. The colors of the fish indicate the amount of mislabeling found in each study, with darker red colors indicating higher levels of fraud. Other observations of fraud or instances in which individuals or businesses were busted by the authorities for committing seafood fraud are represented by striped “jailbird” fish, while studies conducted by Oceana are represented by a blue Oceana logo:

The map is interactive: clicking on a fish reveals location of the study it represents, a summary of the findings, a link to the source material, the year in which the study was conducted, and a citation for the study. The sidebar on the side of the map contains a description of the map and a legend that can be used to toggle the different layers of the map on and off. One can remove the sidebar clicking on an additional options symbol and selecting “Collapse map legend.” 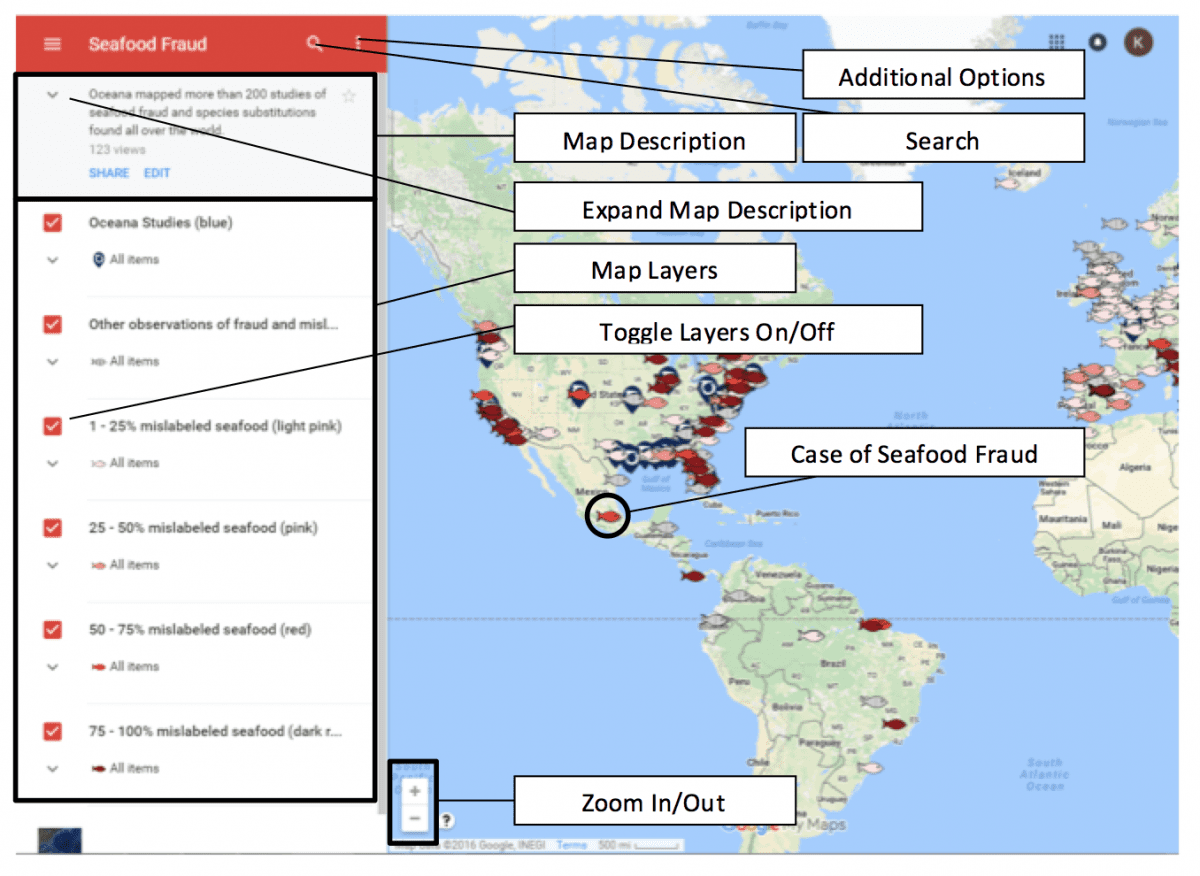 A search function at the top of the sidebar is also available, allowing the user to find specific observations of seafood fraud in their own community and worldwide. By clicking on the magnifying glass icon, the user reveals a search bar. Once a search term has been entered (escolar in the case of the screenshot below), the sidebar will fill with the locations of all icons in which that search term can be found. Clicking on a search result will reveal study information on the sidebar and move the map to the location of the study. 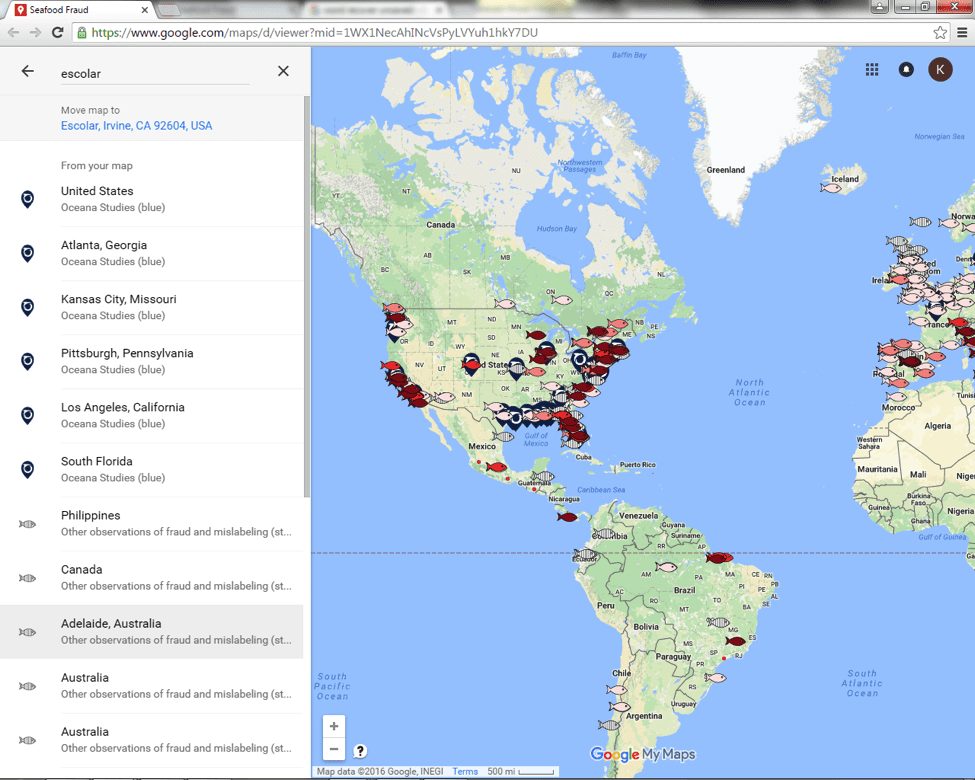 If the frequency of seafood fraud in your community has you alarmed, take action by supporting seafood traceability. Effective seafood traceability means that essential information about a seafood item, such as species name, where and when it was caught or farmed, and the gear used to catch the seafood follows the seafood from the moment it is caught and stays with the seafood item through each step of the supply chain and all the way to you, the final consumer. Tracking fish throughout the supply chain, from boat or farm to plate, will help to curb the issue of seafood fraud by removing opportunities for substitution and other forms of mislabeling because there will be increased transparency and accountability throughout the entire seafood supply chain. More information following our fish through the supply chain will ensure that fish were legally caught, allow for faster recalls, deter fraudulent activities, and help target enforcement to prevent seafood fraud.

The good news is that traceability measures seem to be working where they are implemented. Oceana’s new report “Deceptive Dishes: Seafood Swaps Found Worldwide” describes how the enactment of stronger anti-IUU measures, seafood traceability rules, and mandated consumer information in the European Union (EU) has coincided with a decline in the EU’s overall seafood mislabeling rate over time. The association of strong traceability requirements with reduced seafood fraud is promising.

Earlier this year, the President’s Task Force on Combating Illegal, Unreported, and Unregulated (IUU) Fishing and Seafood Fraud proposed a rule to address these issues that would require traceability for 13 “at-risk” types of seafood from the fishing boat or farm to the United States border. Oceana contends that while this is a good step forward, the government needs to expand traceability requirements to include all seafood sold in the U.S. and extend traceability throughout the entire supply chain, from boat or farm to plate. Full chain traceability would ensure that all seafood sold in the U.S. is safe, legally caught and honestly labeled.