Bycatch, the capture and waste of non-target fish and ocean wildlife, costs fishermen and the marine environment in more ways than one.  In addition to being ecologically wasteful, discarding fish is akin to throwing money into the ocean.  Today, Oceana released a new report that spotlights the economic losses from bycatch—an amount that could reach a staggering $1 billion annually.

The new report, “Wasted Cash: The Price of Waste in the U.S. Fishing Industry,” shows that bycatch costs fishermen time, gear, and access to healthy fish stocks, which adds up to a significant amount of lost money and jobs. “Wasted Cash” supplements another Oceana report released in March, “Wasted Catch: Unresolved Bycatch Problems in U.S. Fisheries” that outlined some of the dirtiest fisheries in the U.S. for bycatch. The new report is also accompanied by a brochure that highlights the economic waste.

“Bycatch is bad business. We’re not just throwing away fish, we’re throwing away money,” Oceana campaign director Dominique Cano-Stocco said in a press release. “The bottom line is that $1 billion in wasted catch is too much. The U.S. must continue to move forward on reducing the amount of bycatch in our nation’s fisheries.”

The report examined economic losses in three main regions: the South Atlantic and Gulf of Mexico, New England and Mid-Atlantic, and Alaska and the Pacific Coast. The southeast region had the most valuable discarded fish at $1.20 per pound, including fish like shrimp, grouper, snapper, tuna, and swordfish.  Popular dinner plate discards in Alaska and the Pacific include halibut and Bluefin tuna, while sea scallops and flounder are often wasted in the New England and Mid-Atlantic region. 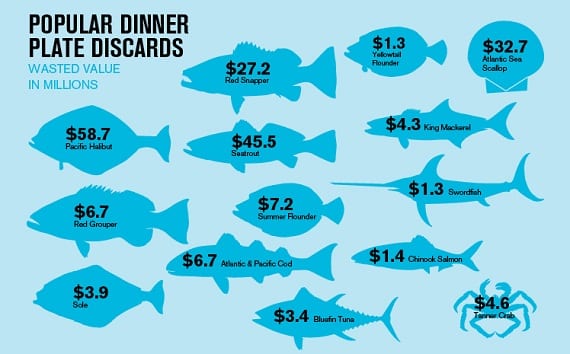 “The staggering amount of fish thrown away every year in the U.S. represents a real loss, both to fishermen and the future resilience of ocean ecosystems,” Oceana marine scientist and report author Amanda Keledjian said. “Fisheries should take the same steps other successful businesses do to cut waste and increase efficiency. In many cases, fishermen have the means and knowledge to make these changes, but lack the economic incentives to do so.”

To calculate these losses, Oceana multiplied the most recent bycatch data from the National Marine Fisheries Service by the price per pound of discarded fish. Though this analysis is conservative (since it doesn’t account for observer bias, undocumented mortality, or include sea turtles or marine mammals), it provides insight into the true costs and benefits that must be weighed when making fishery management decisions.

To increase fisheries efficiency and stop this economic and ecological waste, Oceana recommends a three-step approach:

1. Count – Account for Bycatch: All species caught in a fishery, including bycatch, should be counted. Accurate and precise data are essential for avoiding the negative consequences of overfishing and lost future revenue.

Click here to access all of Oceana’s materials on “Wasted Cash,” including the full report, a brochure with a summary of the findings, photos, expert biographies, and more. Oceana campaigns for responsible fishing by urging policy makers to protect habitat, reduce bycatch and overfishing, and eliminate harmful fishing gears. To learn more about our efforts to promote responsible fishing, click here.