Beachgoers on Myrtle Beach, the Outer Banks and Virginia Beach were treated to aerial displays this Labor Day Weekend, thanks to a partnership between Oceana and the Natural Resources Defense Council (NRDC).

Over the holiday weekend, planes towed banners over the shores of Virginia and the Carolinas that read “Pres. Obama: Keep Oil Off This Beach.”

The banners were aimed at raising public awareness of the Obama Administration’s proposed plan to allow offshore drilling off the coasts of Virginia, Georgia and the Carolinas. If approved, the plan would open large swaths of the Atlantic Ocean to industrial offshore drilling for the first time in U.S. history – threatening marine wildlife and putting ocean ecosystems at risk of a catastrophic oil spill like the BP Deepwater Horizon disaster. 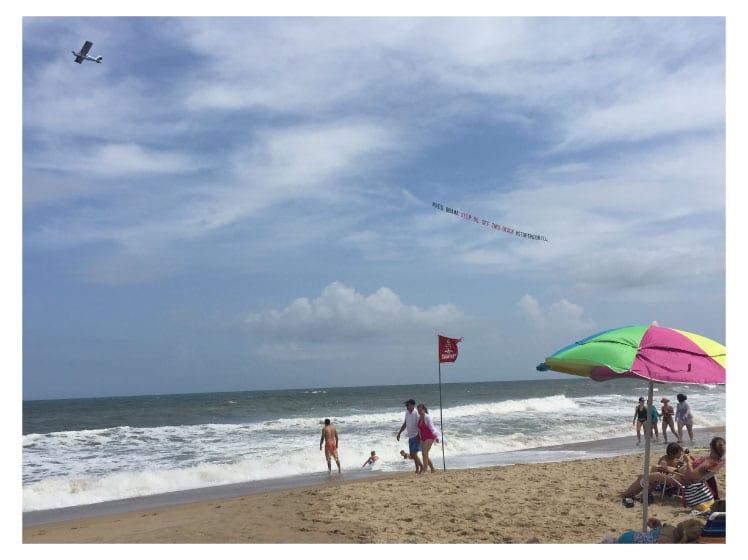 Even offshore drilling exploration is extremely dangerous. In March, 75 leading marine scientists sent a letter to President Obama stating that “…the proposed seismic activity is likely to have significant, long-lasting, and widespread impacts on the reproduction and survival of fish and marine mammal populations in the region. Opening the U.S. east coast to seismic airgun exploration poses an unacceptable risk of serious harm to marine life at the species and population levels…”

Oceana and NRDC’s opposition to offshore drilling reflects the sentiments of more than 75 East Coast municipalities (many others expected soon) representing more than 1 million citizens, more than 90 Members of Congress, 500 state and local officials, and over 160 conservation and animal welfare organizations, that have all come out against Atlantic drilling or exploration.

As the President considers proposals from the oil and gas industry, Oceana will continue to spread the word about the irreversible consequences of opening the Atlantic Outer Continental Shelf to oil drilling operations. This weekend’s air displays reminded ocean lovers that the health and beauty of their coasts are far from guaranteed and that it is up to them to stand up and protect their coasts.