Each issue of Oceana magazine highlights one Oceana supporter. The summer 2014 issue of Oceana magazine put the spotlight on Jean-Cristophe Vie, who is the director of SOS – Save Our Species, a coalition that supports field conservation around the world to protect many of the most endangered animals. Take a look below to learn more about Jean-Cristophe Vie and SOS – Save Our Species.

Jean-Cristophe Vie, director of SOS – Save Our Species

Why did your organization choose to partner with Oceana?

I have been familiar with Oceana’s activities in conservation and education for some time. SOS is funding Oceana’s work to protect the vulnerable shortfin mako in Chilean waters, because Oceana’s proposal was well articulated, convincing, and it was likely to have an impact. We select projects through a competitive process and we benefit from the technical advice of the 9,000 experts of IUCN’s Species Survival Commission as well as the SOS Technical Advisory Group. We receive hundreds of proposals after each call and the Oceana proposal was one of 25 projects selected after our last call for proposals.

SOS – Save Our Species supports conservation of many threatened species. Why sharks?

SOS was designed to channel much-needed funding into conservation priorities as informed by the IUCN Red List of Threatened Species™, the world’s most comprehensive “barometer” of life on earth. This allows us to act strategically when determining calls for proposals. All species of sharks and rays have been evaluated. Many are threatened and we know reasonably well what drives them to extinction. Sharks were also intensely discussed at the last meeting of the CITES with positive outcomes. We thought that it was important to build on this momentum. In addition, our donors expressed an interest in supporting more marine projects. We believe all wildlife has the power to inspire and amaze us, but sharks especially so.

Why did SOS choose to help Oceana protect shortfin mako sharks from being caught as bycatch?

Populations of this remarkable migratory fish are suffering because of the use of steel lines in swordfish fisheries, and Oceana has identified a simple solution to reduce the threat of bycatch: switching to nylon line. Proposed targeted actions are clearly tackling specific threats and we were convinced of Oceana’s ability to implement it effectively.

Can you tell us about your personal connection to the oceans?

Like many in my generation, Cousteau has been an eye opener but I did not embrace ocean conservation immediately in life. I started my career as a wildlife veterinarian with a specialization in primates. I did not grow up nor did I live by the sea for a long time. About 20 years ago, my work led me to French Guiana, a fabulous area for marine turtles. I created a conservation NGO there and I started working on marine turtles. In parallel I also discovered scuba diving and have not stopped since. 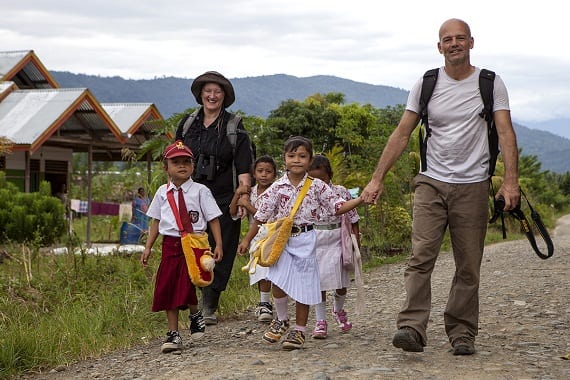 Do you feel hopeful about the future of endangered and threatened ocean species?

Yes, of course! One must keep hopeful but also with good reason. Being hopeful does not mean that we do not recognize that the situation is globally quite serious today. After years of debate, some sharks species were listed by CITES! This was a significant step not only for them, but for the marine environment. Through my career I have seen what can be achieved even by just a few people working together. There were significant results in Europe regarding deep sea fishing. There have been many success stories on land — including the Arabian oryx, the black footed ferret, and the California condor but also for marine species: the situation of some cetaceans species like the humpback whale have improved. Of course, much remains to be done.

Is there anything else you want to tell readers of Oceana?

Thank you for their support to Oceana and the conservation community in general. Oceana is one organization in an ocean of dedicated NGOs working with the same passion and for the same cause. Conservation is probably the noblest battle we can find, benefiting all human beings. Nature is our life support system and without it we would not be here — so please keep up the support.