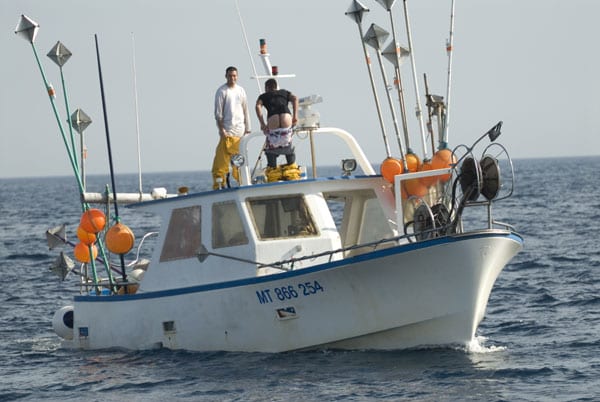 Following five days spent in Marseilles with the weather unsettled and the driftnetters moored and waiting for the good weather conditions that would allow them to return to their habitual robbery, we finally set sail at dawn on 18 May, bearing for Hyeres, fearing that we would again find driftnetting activity near the port. If so, we would again film the illegal fishing.

We left the bight of Marseilles, sailing through the strait between the island of Ratonneau and the shore. As with so many places that we have encountered in our campaigns in the Mediterranean in recent years, there is history evident at every turn.

There are city walls, castles or stone buildings that have seen pass before them the square sails or lateens of legendary seafarers, merchant adventurers and fearsome corsairs. It makes us think of those times when the Mediterranean was probably brimming with life and would have contained specimens of sizes that today seem incredible, as we observe the usual catches in this over-harvested sea.

At two o’clock in the afternoon, we arrived in Hyeres and after a brief wait, as we feared, the drifnetters set sail again.. Alter filming some of them casting their driftnet , we withdrew and waited patiently until they had most of their nets in the water.

At about 11 p.m., we approached again and by locating the buoy’s beacons on the radar, we measured a pair of nets that were each of 6 to 7 kilometers.

We continued our routine for another day, checking the Cavalaire area. We recovered a life raft for 30 people that we found drifting, fortunately with no sign of having been occupied by the survivors of a shipwreck, and reported the finding to the maritime authorities via the radio. On 20 May, we docked in Port Frejus to take on fuel. After leaving the raft at the fuel wharf so that the authorities could pick it up, we stationed ourselves off the port of San Raphael to wait for possible driftnetters setting sail for their fishing grounds. They didn’t take long to appear and we returned to following their activity.

We again filmed some of them at work, casting their illegal nets, and when it was getting dark, we withdrew a few miles to remain in the area until daybreak and then to try to document them taking in their nets. We had seen dolphins in the area and believed that more of them would be caught today. When this happens, they usually delay in taking in their nets and it’s possible to film the fishing in daylight. After two weeks of doing the same thing with no incident to report between the driftnetters and the Ranger, today we were in for a shock.

Obviously, the fishing was significant. We were documenting the catch of the Gallus and after watching us for several minutes, they decided to fire a flare at us, which passed across the bow of the Ranger. Despite this grave infraction of the international shipping regulations and the huge criminal negligence involved in firing a flare close to people, in the beginning I thought the intention of the madman was to scare us, to put it one way. I remind you, respectfully and with no intention of trivializing, of the boy who died in the sad incident of the flare that was fired across a football ground.

However, in the video recording, we could see that the flare was aimed directly at us and that it was only the lack of accuracy that caused the flare to divert from the trajectory intended by the criminal who fired it. Anyway, we remained impassive and calm, not reacting and not preventing or obstructing their work, hoping that they would realize what they’d done and believing that, after this crazy tantrum, their usual indifference would return.

Well, that’s what happened, at least at the beginning, and so we documented two more trawlers. With the last of these, the Santa II, things changed radically. We believe that the trigger was a catch that the driftnetters particularly fear, especially when they are being filmed. Several members of our crew sensed at a particular time, when just the last few meters of the net were left in the water, that there was a cetacean (probably a dolphin) in the catch that they had begun to lift from the water.

The fishermen reacted immediately and in a second threw the net back into the water, preventing us from filming the catch. After a moment of indecision, and while we could see that the trawlers that had already finished gathering their nets were closing in, we saw the crew of the Santa II rush to their net and begin to cut it away, leaving a buoy attached to it so they would be able to pick up the last few meters later, which we assumed contained the trapped dead dolphin that we had almost managed to film.

From that point on, it’s quite simple. The criminals, having been filmed and photographed throughout the previous afternoon and that morning, decided to attack the Ranger. This is no surprise given the rabble we were looking at, although you never get used to the fact that these shameless delinquents, subsidised by our taxes, do what they want in front of intimidated governments and helpless citizens. Yes my friend, with your money, taken from your pocket and ending up with the “poor pirate drifnetters.” It is something else to be added to the list; they make millions at your expense. Remember that when you are thinking about paying your mortgage or the options for education of your children.

The seven fishing boats that had gathered around the Ranger attempted for an hour and in every way possible to immobilize us with nets and ropes hurled at our propellers, while some threatened us, showing us their backsides and their genitals, the latter, unfortunately, in a state of repose, which somewhat lessened the feeling of danger.

When we saw how things were developing, we decided to call the French authorities to let them know was happening and request their intervention. As was bound to happen — seven against one, we can’t perform miracles! — they entangled our propellers. With the Ranger immobilized, they began to hurl rays with poisonous stings. This was extremely dangerous for those on board the Ranger, as one of these can put you in hospital, at the very least. They also threw other “discarded” fish that they had on board, plastic bottles filled with water. In all, they were giving the vessel a real lashing. Some were trying, boat hooks in hand, to board the Ranger to take our cameras and tapes.

That was the situation when the first helicopter sent by the French coast guard arrived and the result was devastating. After a moment of being disconcerted, the attacking fleet began to disconnect itself from the ropes they’d been able to attach to the Ranger and took flight in a display of clean conscience and exemplary citizenship. Minutes later, a Navy helicopter appeared.

For our part, we lowered Carlos Suárez down to the propellers and after an inspection, we set to work, managing to cut away and disentangle the ropes after almost half an hour of work. After confirming that we had managed to avoid serious damage to the propellers and shafts, and with the valiant band of assailants put to flight by the arrival of the helicopters, we decided to head towards Bastia in Corsica, where we docked the following day. I’m sure that Xavier will later report what occurred, in the form of a campaign report, in order that you will be able to appreciate the significance of what the Ranger is doing in documenting the activities of drifnetters in the Mediterranean.

To my colleagues on the crew, bravo for your endurance and determination in a high-pressure situation; to you, the readers, and to those of you who have sent us messages of congratulations and support, thank you for not forgetting us; and to our driftnetter friends, we will continue reporting.

…on board the Ranger