As you may have previously read on The Beacon, Oceana in Europe recently wrapped-up a ten-day expedition to the Balearic seamounts off Spain to determine the need for Marine Protected Areas (MPAs) in the region. The expedition crew traveled to a series of seamounts in the Mallorca Channel (Emile Baudot, Ausias March, and Ses Olives seamounts) as well as the coralligenous reef of Fort d’en Moreu, which lies east of the Cabrera archipelago—and found that areas within this region are indeed in need of protection.

In addition to documenting and mapping these fragile habitats with the help of an underwater robot (ROV), crew members kept “expedition diaries” while they were out at sea, commenting on aspects like weather conditions and local marine life. Whether you’re a budding scientist or simply interested in life at sea, these diaries provide a behind-the-scenes glance into Oceana’s most recent expedition. 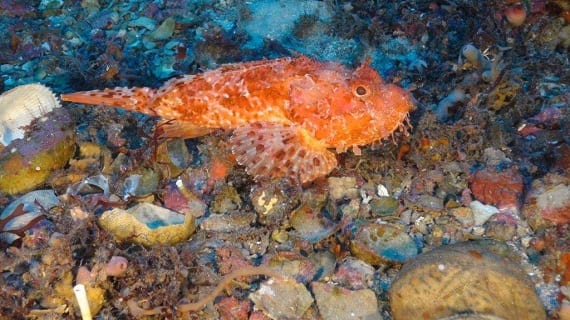 Scorpion fish and maërl bed, pictured during an Oceana expedition to the Balearic seamounts onboard the SOCIB R/V off the Balearic islands, Spain. (Photo: Oceana in Europe / Flickr)

Take a look below for a snapshot of a few expedition diaries, and click here to see the entire list of diaries from Oceana crew members.

After ten years of expeditions, once again another Oceana campaign kicks off.

This time, the goal is to document the seamounts in the Mallorca Channel through video and bionomic mapping.  It is now eight o’clock sharp, and the Cathedral of Palma is disappearing from view, and the bow of the ship is pointing towards the Cabrera archipelago.

In just a few hours, we will reach our first area of work: the Fort d’en Moreu, a coralligenous reef just outside the Eastern boundaries of the National Park of Cabrera.

This time we are not using the Ranger Vessel. For a number of reasons we have decided to charter the Coastal Ocean Research Vessel SOCIB, as it contains equipment that is large enough to help us reach the goal of our voyage.

Once we arrived along the designated points for the expedition, we launched the ROV (underwater robot) into the water nine times in ten hours. The day has been very productive. The sea beds that we have documented contain rhodoliths and banks of posidonia leaves, two important habitats in the Mediterranean Sea that need protection.

In our first immersion today at more than 900 meters deep, we found a group of deep-sea sharks.

We explored some volcanic pinnacles near Emile Baudot. Back in 2013 we found stony sponges in a seamount in Gulf of Valencia, and now we could see them here.  This is the second time these sponges are ever documented in the Mediterranean Sea in addition to just a few of them that have been sighted in the rest of the world.

The sea was quite rough, the waves broke against the vessel´s hulls and the water splashed us once and over again; we took the equipment out to the surface after quite a busy and hard day; everything remained silent while we headed to the next point of immersion.

The weather hasn´t improved today, we are in the immersion point but the waves are rather high. We started preparing the equipment in case the weather becomes benevolent, so we can put the ROV out into the water. It is nine o´clock in the morning and the operation starts. The way to the bottom is a long journey, after almost one hour we are sailing over a small mount in the Southeast of Emile Baudot´s peak.  In our way down we found transparent marine animals of phantasmagoric appearance but very pretty indeed, they are called ctenophores. The wind in the surface becomes stronger, the situation changes in just a few minutes, we cannot put the equipment at risk, so unfortunately after 300 meters of transect we have to abort the dive.

Course 277º, speed 11 knots. We´re heading to other point to try to leave the wind behind and get to do some more work. Impossible. We´re anchoring near Formentera.

Suddenly the weather got better, so we decide to move on and do two more ROV immersions in west Formentera. We want to check the extension of the coralligenous at the west part out of the Site of Community Importance in Ses Salines of Ibiza and Formentera.  We didn´t find any coralligenous nor maërl, but we did find some interesting detrital sandy bottoms with sponges and some sea pens.