Why is an organization focused on protecting the world’s oceans advocating for the removal of four dams 290 miles from the sea? The connections between wild Pacific salmon, endangered killer whales, and a great western river make a compelling case for changing how we think about the oceans and the threats to them. We will explain that, but to the point, everyone who cares about healthy ocean ecosystems and sustainable fisheries should call on President Obama to remove four dams on the lower Snake River built and operated by the U.S. Army Corps of Engineers: the Lower Granite, Little Goose, Lower Monumental and Ice Harbor dams. 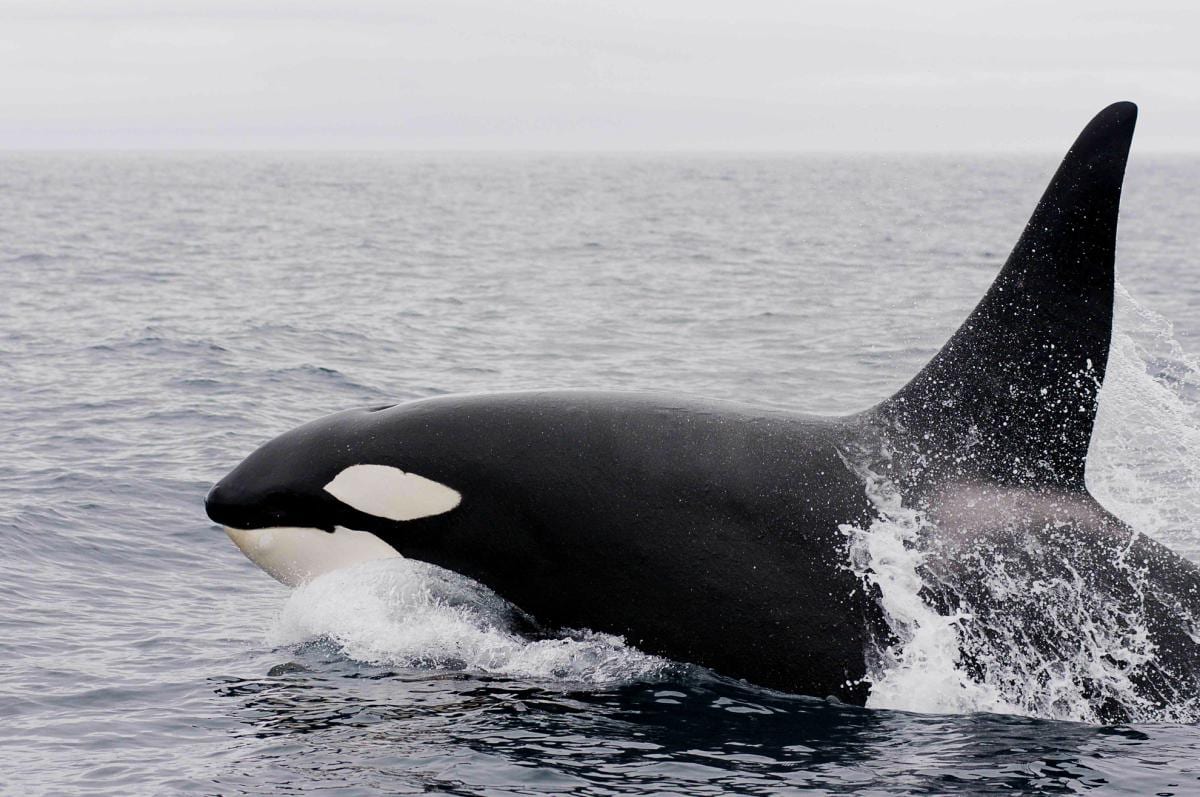 The Snake River, with its headwaters in the Rocky Mountains of western Wyoming flows 1,078 miles to the Columbia River, which is the largest North American river that empties into the Pacific Ocean. The Columbia, the Snake and their many tributaries once supported 10 to 16 million salmon and steelhead each year that would return from the open Pacific Ocean to spawn in their natal streams.

If you are not already familiar, let’s just say, Pacific salmon are truly amazing fish. They are born in freshwater streams and lakes, some hundreds of miles inland, in this case as far west as Idaho. Yet these fish are also ocean species. As they grow they travel the course of their native river to the open Pacific Ocean, where they spend the majority of their adult lives feeding and maturing, and preparing to make their great journey back to their home stream to spawn…and die. (Unlike their Pacific salmon kin, steelhead can actually spawn several times).

Salmon and steelhead, for time immemorial have been – and are still – vital to many Native American cultures. For many tribes in the region salmon have been a primary food source for thousands of years. But they are more than food to many people. The Columbia-Inter River Tribal Fish Commission writes “without salmon returning to our rivers and streams, we would cease to be Indian people.”

The importance of salmon to commercial and recreational fisheries as well as many families and communities in this corner of the world is indisputable. Wild salmon and steelhead populations, however, are now a fraction of their former abundance. Today there are 28 threatened and endangered salmonid populations on the U.S. West Coast. Thirteen of those spawn in the Columbia River and its tributaries; of those, four are from the Snake River: fall chinook (Threatened), spring/summer chinook (Threatened), sockeye (Endangered) and steelhead (Threatened). What is more, with large portions of the Columbia and Snake rivers now impassible to fish due to dams, just over half of the wild salmon populations in the Columbia River basin are already extinct. It is estimated that 37 genetically distinct salmon runs have been lost forever.[i] 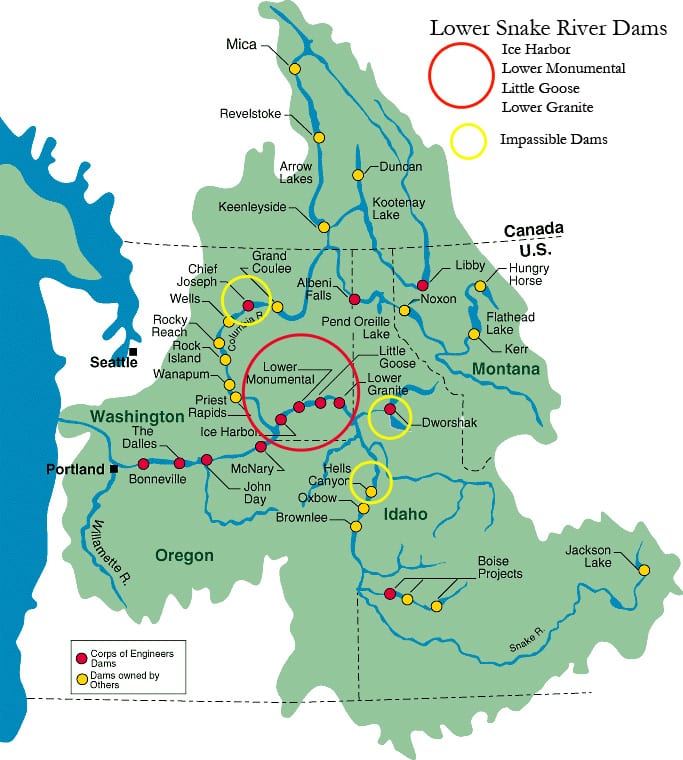 Major dams on the Columbia River, Snake River and main tributaries, highlighting the lower Snake River dams and dams that do not allow fish passage. Adapted from the U.S. Army Corps of Engineers.

On average, there is a major dam every 72 miles in the Columbia River Basin. The upper stretches of the Columbia and the Snake are impassible at the Chief Joseph and Hells Canyon dams, respectively. But salmon can navigate past some dams.

Eight federal dams managed by the Army Corps of Engineers – four on the lower Columbia and four on the lower Snake – are built with fish ladders for returning adult salmon. Among all human-caused impacts, however, dams have the greatest impact on salmon population recovery and survival. Dams have greatly reduced or eliminated historically accessible habitat, they reduce natural river flow important for out-migrating smolt, they increase water temperatures, they alter sediment flow, they have changed the makeup of fish communities resulting in increased salmon predation. What is more, the physical features of dams such as turbines and sluiceways directly kill both adult and juvenile salmon. This summer, unusually warm waters, especially in the slackwater behind dams, is killing thousands of salmon returning to the Columbia Basin.

But how about the orcas?

The Southern Resident population of killer whales – or orcas – are actually a large family or clan of orcas made up of three different “pods”. This orca population primarily lives in the Salish Sea/ Puget Sound area of Washington State during the spring and summer months. They do one thing, really well, and that’s eat salmon. Orcas are able to use echolocation to detect different salmon species and focus on their preferred prey.  What scientists are learning is that these southern resident orcas prefer Chinook (king) salmon. Over 75 percent of their summer diet is Chinook salmon.

The National Marine Fisheries Service listed the Southern Resident killer whale as endangered in 2005. There are now only 81 remaining individuals and the lack of adequate prey – primarily Chinook salmon – is one of the biggest threats to their survival and recovery. Scientists have linked the survival and birth rates of this orca population with the coastwide abundance of Chinook salmon.[ii] In the summer months, when they are feeding in the Salish Sea, these orcas depend heavily on Chinook bound for British Columbia’s Fraser River. New scientific studies show that in the late fall and winter months, two of the three orca pods spend a significant amount of time feeding off the outer U.S. West Coast. What is more, those two pods spend a substantial amount of their time feeding between Gray’s Harbor and the mouth of the Columbia River.[iii] What are they doing there? They are feeding on salmon returning to the Columbia and Snake River systems.

Rebuilding Chinook salmon populations is probably the most important thing we can do to help endangered orcas recover. The National Marine Fisheries Service has determined that the lack of adequate prey for Southern Resident Killer Whales “will require a long-term commitment to rebuilding and enhancing salmon stocks.”[iv]  The federal government, however, has been reluctant to make what is arguably the greatest commitment, and that is to decommission the lower four Snake River dams.

Removing those four dams would restore productive access to thousands of miles of river and streams and produce hundreds of thousands more Chinook to help southern resident killer whales survive and rebuild. In fact, removing these four dams may be the single biggest action that that the U.S. can take to increase salmon abundance in the region, prevent future salmon population extinctions, and help orcas recover.

Some argue these dams are vital to the region’s hydroelectric power supply and shipping. Yet the four dams on the lower Snake River (the Lower Granite, Little Goose, Lower Monumental and Ice Harbor) provide only one to four percent of the region’s power depending on the time of year. These dams are increasingly expensive to maintain and their benefits in terms of shipping and power can and are being offset by highway and rail transportation, wind and solar energy development, plus additional investments in energy efficiency. A retired 35-year career U.S. Army Corps of Engineers civil engineer, Jim Waddell, finds

“The American people can no longer afford these dams, whether their costs are measured in dollars or fish, lost opportunity or continued environmental damage. The construction of these 4 dams has been a mistake, and at some point they will be breached. The longer the time before restoring this river to its natural flow, the greater the cost to the American taxpayer.”[v]

Oceana is not the first to come to the conclusion that these dams must go to recover salmon and orcas. In fact, we are only recent partners with a long list of organizations, tribes, scientists and fishermen who have been working hard for this change. We have recently partnered with the Save our Wild Salmon Coalition and a growing Orca-Salmon Alliance dedicated to recovering wild salmon and orcas populations.

Please join Oceana and our partners and call on President Obama to remove four dams on the lower Snake River. Click here and sign the petition.

[v] Waddel, J. 2014. Comments to the U.S. Army Corps of Engineers Waterway Users Advisory Board at their meeting of August 14, 2014 in Walla Walla, Washington. Accessed at: http://snakeriverwaterkeeper.org/snwk/wp-content/uploads/2014/08/Jim-Waddell-IWUB-comments-8-14-14.pdf