Passage through the Panama Canal 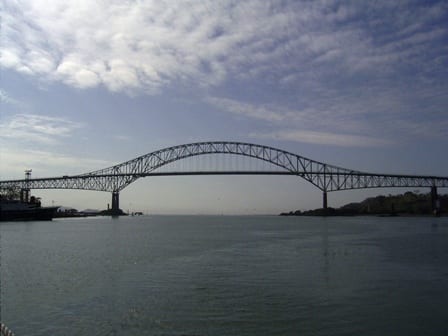 We get to Panama and go directly to the dock where the Ranger is. Our colleagues from the expedition are there waiting to make the crew substitution, filling the fuel tanks and generally preparing the boat to cross the Panama Canal.

Throughout the day, we watch the fish in whose company we are waiting. Dozens of balloonfish and a multitude of small shoals of baby fish surround us. They approach the Ranger and the pier and nibble at the algae that grows in the cracks or against the posts of the dock. Their movements are slow and we can see them with complete clarity; we can even touch them.

A little further out, there are a few Panamanian sergeant majors, much more agile, that never stop looking for some crumb fallen to the sea to devour.

Further still, dozens of boats crowd together, each waiting its turn to pass through the canal: Ro-Ros, oil tankers, container ships and not all that far from us, a pair of huge tuna freezer ships.

The crew from the MarViva boat returned to Golfito, their base in Costa Rica, having accompanied and supported the Oceana Ranger over the past few days. Without their help, our work would have been immeasurably more difficult to complete.

Very early, almost at dawn, we leave Flamenco Marine with the goal of crossing the Panama Canal; in only 15 hours, we will be in the Caribbean. The canal has enabled passage from the Pacific to the Atlantic since 1914. In the past year, approximately 14,000 boats have used it, mostly Chinese boats carrying iron and oil.

Accompanied by brown pelicans, Bonaparte’s gulls and a few royal terns, we begin our crossing.

After a few hours of waiting, we began to slowly cross the locks. We receive support from both sides of the canal; in the passage with us, there is a boat of tourists who are extremely interested in learning about Oceana and what we are doing. It’s not every day that they cross the canal with boats of our size, with other large cargo ships waiting their turn. These latter ships are aided by locomotives on both ends of the canal, which measures approximately 33 meters in width.

Side by side, the boats begin to rise with the level of water; the locks have closed and little by little we float upward. Twenty minutes later, we make a maneuver — we release the poles and we pass from one to another until we reach the next lock. The trip is slow but throughout we have a feeling of security and there doesn’t seem to be any great risk. One interesting thing is that from time to time there are boats making the transit from the opposition direction, which makes the operation more complicated.

There are three series of lockgates to pass through: Miraflores, Pedro Miguel and a final set that opens into Gatún Lake.

The webcams installed at Miraflores and Gatún allow our colleagues working in Oceana’s offices to share this historic moment in the Ranger’s first transatlantic expedition. We communicate with them via a satellite text message system and they convey their excitement at being able to see us — live! — from a computer screen and using the web page of the Panama Canal.

Once again terns, frigate birds and a cormorant or two appear along the way, signaled by buoys and of course, there are the ever-present buzzards. As we watch the scenery of the canal passage and look towards the trees, we discern a two-toed sloth resting in the branches.

Before we pass through the last lock, we must await our turn in a freshwater lake encircled by tiny islets, very lush, with a great diversity of vegetation. We take advantage of the time to refresh ourselves for a few brief moments.

Once we have passed through the last lock, we enter the Caribbean. We anchor in Colón, where we spend the night, and where we prepare for the journey to Cayos Cochinos.