I appreciate a well-placed advertisement, and not just because I work on Oceana’s Marketing and Communications team. Many times I have hopped off the DC Metro at the Farragut West station to have one of the art museum displays catch my eye.

Last week I was stopped in my tracks by an advertisement for the Corcoran Gallery of Art. The creative was highlighting two current exhibits at the museum, Sargent and the Sea and Edward Burtynsky: Oil. A large thumbnail of the John Singer Sargent painting, En Route pour la pêche, is what caught my eye. The painting shows a family walking along a beautiful beach. Right next to it was a Burtynsky photograph of an oil refinery.

The Corcoran’s website describes Burtynsky’s exhibition as revealing “the effects of oil on our lives, depicting landscapes altered by its extraction from the earth and by the cities and suburban sprawl generated around its use.” He also set out to comment on the approaching end of the oil supply.

The juxtaposition of the two images could be a coincidence, but I hope it gives others pause — and makes them consider the impacts of offshore drilling and oil pollution on our oceans. And if they need a clearer picture, all they have to do is glance across to the other platform to see our new ad: 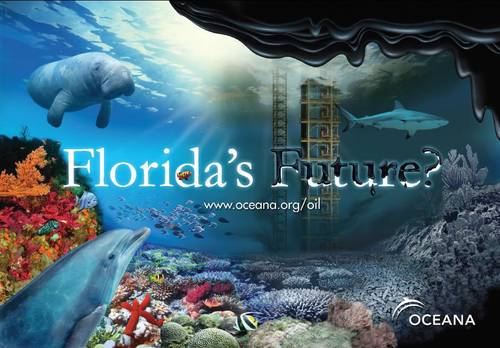 Oceana ran this ad, and several others like it, so that museums don’t become the only place to see the beauty the oceans have to offer. The expansion of oil drilling on our coasts, especially in Florida, threatens the oceans and all the life within them.

I like museums, but I prefer the real thing.